The 2017 budget proposal that President Obama will release next week may include something the final 2016 budget lacked: a renewed commitment to reducing homelessness and helping more low-income families to afford decent rental housing.

As we’ve reported, the final 2016 budget that lawmakers approved last December shortchanged programs that assist low- and moderate-income families, including low-income housing programs.  While lawmakers increased total funding for non-defense discretionary programs by 5.5 percent over the 2015 level, funding for Department of Housing and Urban Development (HUD) programs rose by just 3.5 percent.  Even with this increase, total funding for HUD programs (excluding mortgage insurance receipts and expenses) remains more than 10 percent below the 2010 level, adjusted for inflation.

Still, HUD’s programs should have received higher priority for additional resources.  Rigorous research shows that rental assistance reduces poverty, homelessness, and other hardships, and it can provide a platform for low-income children to improve their lives over the long term.  And HUD’s programs serve the nation’s most vulnerable seniors, people with disabilities, and families with children.

Meanwhile, more low-income families are struggling to afford housing and make ends meet.  As the number of renter households has surged over the past decade, rents have risen strongly even as renter incomes fell in the wake of the Great Recession and have yet to fully recover.  Exacerbating the problem, some 60,000 fewer families were using housing vouchers last September, compared to December 2012, due to the across-the-board sequestration funding cuts that policymakers implemented in 2013 (see chart). 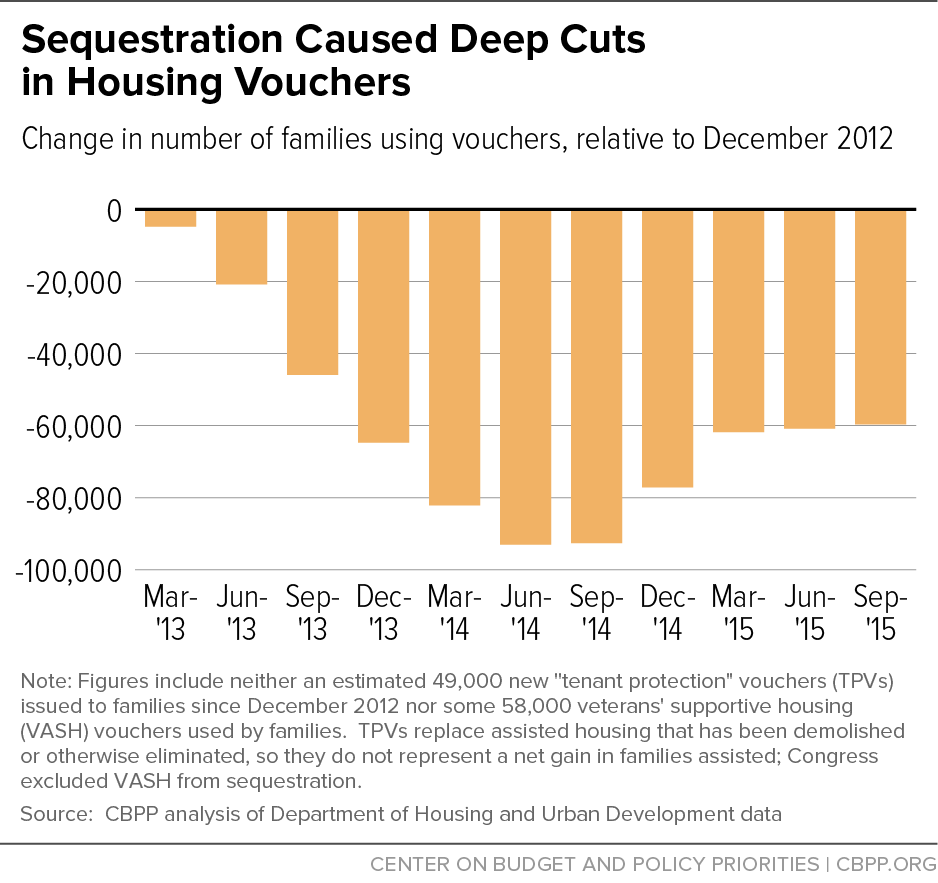 Lawmakers missed an opportunity to address these problems and significantly reduce homelessness in the final 2016 budget.  The difference between a 3.5 percent and a 5.5 percent funding increase for HUD amounts to $878 million, which lawmakers could have used to:

Together, these provisions would have enabled communities to end veterans’ and chronic homelessness by 2017, and make meaningful progress in reducing homelessness among families with children.  (President Obama included similar proposals in his 2016 budget request.)

This wouldn’t solve the severe shortage of affordable housing — or even fully reverse the damage caused by recent cuts in federal housing assistance.  But lawmakers could have made substantial progress on a problem that has a devastating impact on millions of Americans, including more than 1 million children.  The President’s 2017 budget proposal may show policymakers a path to solving homelessness for some of the country’s most vulnerable people.