Sluggish income growth isn’t keeping pace with rising housing costs, the Census Bureau’s American Community Survey (ACS) data show.  At $53,657, median household income in 2014 was 7 percent below the 2007 level, after adjusting for inflation, the ACS data issued yesterday show — but the median rent nationally (including utilities) was $934 a month, 4 percent above the inflation-adjusted 2007 level.

In every state except North Dakota, median rents have grown faster than median household incomes since before the Recession.

Rents have grown fastest in Arkansas and West Virginia — by more than 10 percent since 2007, after adjusting for inflation — while household incomes in those states have fallen by 5 and 3 percent, respectively.

Even relatively small rent increases can seriously strain household budgets when incomes are falling.  For instance, Nevada’s median rent has risen by only 2 percent since 2007 but median household income has plummeted by 18 percent, after adjusting for inflation.

The growing gap between rents and incomes particularly squeezes low-income families, who typically rent rather than own their homes.  Most of these families work but don’t earn enough to keep up with rising housing costs.  Paychecks for low-wage workers have actually shrunk in inflation-adjusted terms since the depth of the recession, the National Employment Law Project finds.  For people earning between $8 and $10 an hour, wages fell nearly 6 percent between 2009 and 2014. 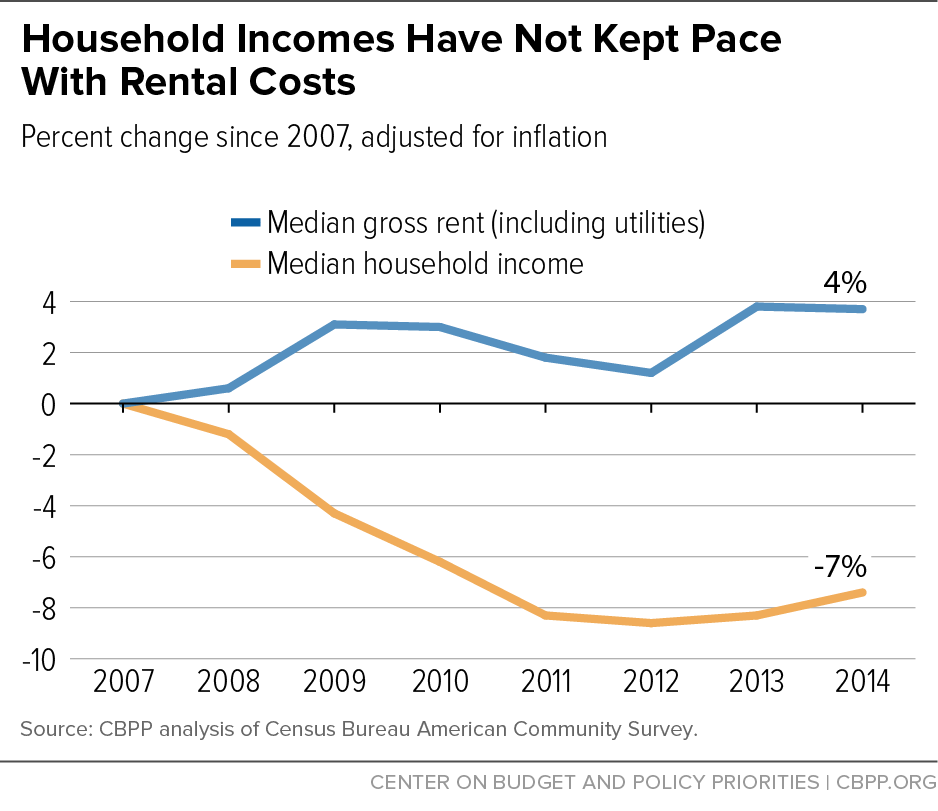 One in four renters live in poverty.  Paying too much for housing puts these families at risk for homelessness, housing instability, and overcrowding.  As we wrote recently, federal rental assistance makes a big difference, lifting 2.8 million people out of poverty last year.  But it only reaches about one in four eligible families, and few states offer additional help.  Continued slow income growth and rising rents make rental assistance critical to help poor families keep a roof over their heads.

Larger Census Survey Indicates Poverty Down, Income Up in 2014

May 11, 2015
PreviousExpanding “Moving to Work” Could Narrow Families’ Housing Choices
NextSlow Progress for Struggling People in the States, Census Data Show
Stay up to date
Receive the latest news and reports from the Center