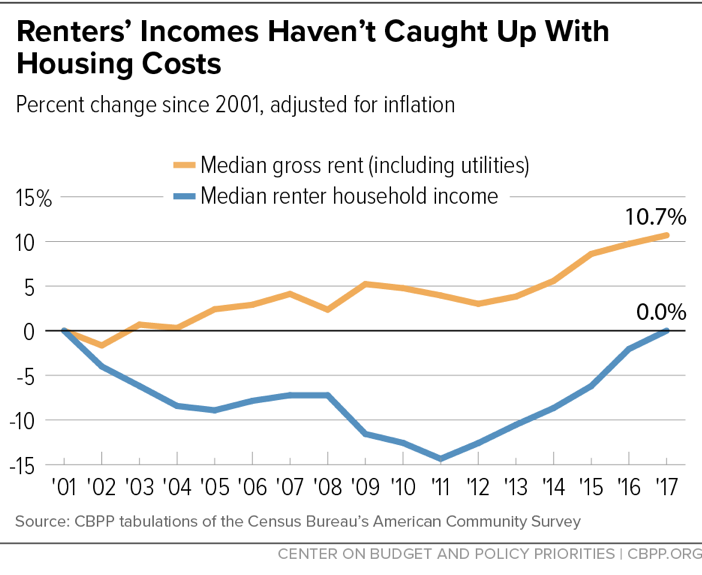 Renter incomes fell during the recessions that began in 2001 and 2007 before starting to rebound in 2012, two full years after the Great Recession ended, and didn’t return to the 2001 level until 2017. The median renter household’s income rose 2.0 percent in 2017, less than in each of the two previous years. Moreover, some of the recent gains among renters reflect high-income households switching from owning to renting, rather than strong income growth among low- and moderate-income households alone. Indeed, average hourly wages rose only 0.2 percent last year, Labor Department data show, while housing costs rose 0.9 percent.

Sixty-five percent of low-income renter households are cost burdened — that is, they pay over 30 percent of their income for housing, the federal standard of affordability. Most of them work, but often in low-wage jobs that don’t pay enough to cover rising housing costs. The typical cost-burdened low-income working household earned $23,000 in 2016 (the latest year for which we have these data), meaning they could only afford to pay $575 a month for rent and utilities without exceeding the 30 percent limit. (Low-income renters are those earning 80 percent or less of the local median income.)

Growing housing costs make rental assistance critical to help families keep a roof over their heads. Three in four low-income renters are cost-burdened but don’t receive federal rental assistance due to funding limitations. Families that pay too much for housing are at risk of overcrowding, housing instability, and homelessness. As policymakers finalize 2019 funding for federal rental assistance programs, they should at least prevent a reduction in the number of households receiving aid. Going forward, federal programs need to expand substantially, and states and localities should strengthen their own housing programs as well.

May 14, 2018
PreviousStates Should Adopt Policies to Help Dismantle Racial Barriers to Broader Prosperity
NextWatch: SNAP and Medicaid Work for Workers
Stay up to date
Receive the latest news and reports from the Center