Census: No Spike in Uninsured Rate, But Gap Persisted for States That Haven’t Expanded Medicaid

At 8.6 percent in 2020, the uninsured rate remained largely unchanged from 2018, the Census Bureau’s new Current Population Survey (CPS) data show. Medicaid played a significant role in mitigating coverage losses, as administrative data indicate that the program helped protect against losses as the COVID-19 recession took hold. And as in past years, states that have used the Affordable Care Act (ACA) to expand Medicaid had much lower uninsured rates than states refusing to expand.

Data collection limitations due to the pandemic make it difficult to assess exactly how health coverage changed from the previous year, which is why Census primarily used 2018 as a point of comparison. But the numbers are consistent with the results of other surveys showing no evidence of a spike in the share of people without health coverage, despite the link in prior recessions between rises in unemployment and in the number who are uninsured.

It’s likely that coverage levels remained stable for a few reasons. The COVID-19 recession’s job losses were concentrated in industries whose workers are less likely to have employment-based health coverage. And importantly, Medicaid has helped people get and maintain coverage during the crisis. People qualified for Medicaid as they lost jobs and work hours, bringing their incomes within Medicaid’s eligibility ranges. And the Families First Coronavirus Response Act’s “continuous coverage” provision incentivized states to maintain coverage for Medicaid enrollees by making higher matching federal funds contingent on states not terminating coverage during the public health emergency.

Medicaid and Children’s Health Insurance Program enrollment rose by 8.9 million (12.5 percent) from February through December 2020, administrative data show. This demonstrates both Medicaid’s success in helping people maintain coverage during economic downturns and the need to streamline Medicaid renewals when the public health emergency ends, using strategies such as automatic renewals.

These large differences persisted in 2020, today’s Census release demonstrates, consistent with recent findings from the Centers for Disease Control and Prevention’s National Health Interview Survey and another recent survey from the Urban Institute. (See figure.) And they highlight the need for Congress to close the Medicaid coverage gap, in which people in non-expansion states who have incomes below the poverty line are ineligible for Medicaid coverage. A permanent solution to the coverage gap would provide a pathway to coverage for over 2.2 million people, and should be part of recovery legislation Congress is working on. 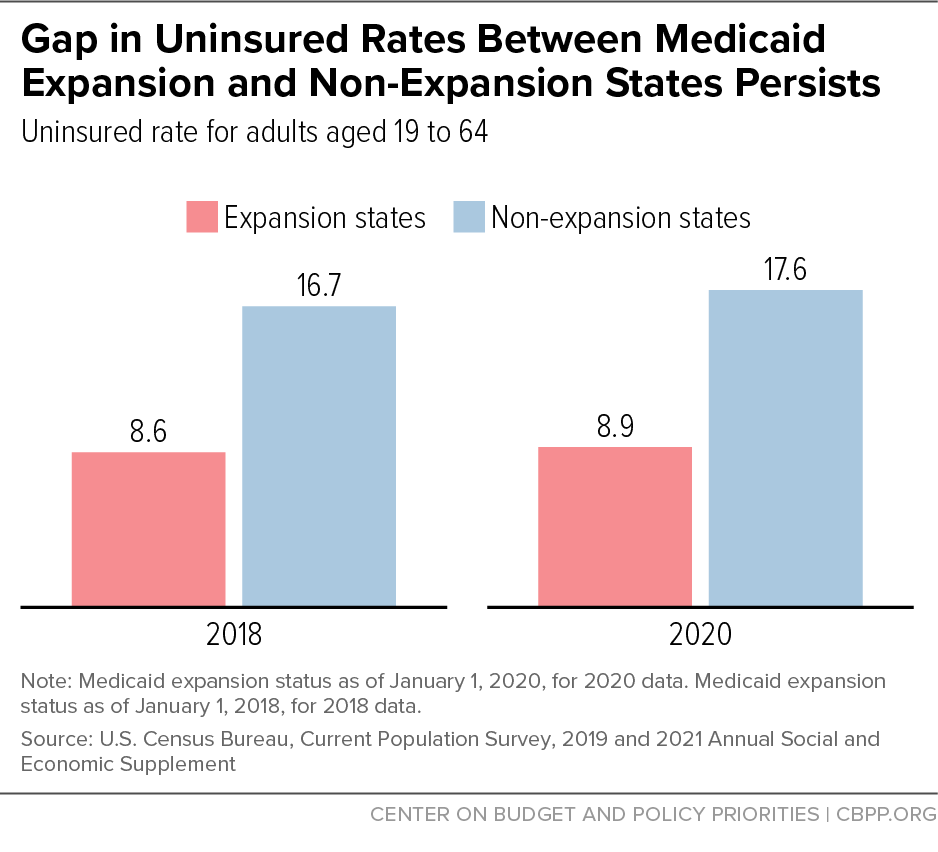 Build Back Better Legislation Would Close the Medicaid Coverage Gap

Unwinding the Medicaid Continuous Coverage Provision: What States Can Do Now to Keep Eligible People Covered

March 23, 2021
PreviousPlan to Rebuild IRS Would Advance Racial Equity
NextProposed Targeted Housing Voucher Expansion Is Critical to Housing Stability for People With Greatest Barriers
Stay up to date
Receive the latest news and reports from the Center