The findings continue the trend between rents and incomes since 2001. After adjusting for inflation, median renter household income rose just 0.5 percent from 2001 to 2018, while rents rose nearly 13 percent. (See graph.) 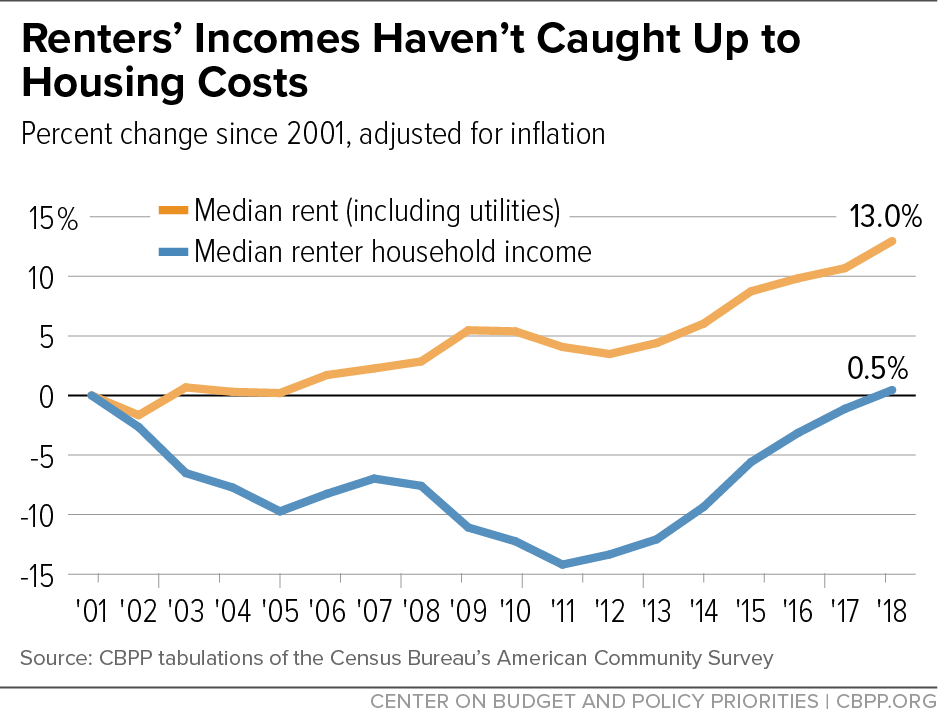 Renter incomes fell during the recessions that began in 2001 and 2007 before starting to rebound in 2012, three full years after the latter (the Great Recession) ended. After a long recovery, the median renter household’s income finally is higher than in 2001, but growth rates have slowed in each of the last three years.

Despite modest income growth and a strong job market, many renter households struggle to pay their rent. That’s due in part to the rise in rental costs. Low-wage jobs, in particular, don’t pay enough to cover the rent. A parent working full time and earning the federal minimum wage can’t afford a modest two-bedroom in any state. And over half of renter households working in health care support, food preparation, and personal care and service jobs are cost burdened — that is, they pay over 30 percent of their income for housing (the federal standard of affordability). It’s perhaps not surprising, then, that a near-record 8.3 million renter households with very low incomes either pay more than half their income for rent or live in severely substandard housing.

Last year’s 2.1 percent growth rate in median rent and utilities was faster than in the last two years. If rents continue to rise, housing affordability problems could worsen, particularly if another recession strains family budgets.

Federal rental assistance is therefore critical to helping low-income families keep a roof over their heads. Twenty-three million people — overwhelmingly children, working adults, seniors, and people with disabilities — live in a low-income household that pays more than half of its income for rent. These families often forgo necessities, like food or medicine, to keep a roof over their heads. Moreover, families that pay too much for housing are at risk of experiencing overcrowding, housing instability, and homelessness.

Despite this affordable housing crisis, more federal dollars go to homeownership subsidies that mainly benefit higher-income households, such as the mortgage interest deduction, instead of families that struggle the most to afford housing. And President Trump’s 2020 budget would slash limited funds for federal rental assistance even further, eliminating rental vouchers for 140,000 low-income households and raising rents on 4 million other low-income households. Our communities only thrive when everyone has access to decent, affordable housing. Policymakers should substantially expand federal rental assistance programs, and states and localities should develop or strengthen their own housing programs as well.

In a Recession, Put Deficit Concerns Aside

Strengthening Housing Vouchers Should Be Priority in 2020 Funding Bills

August 26, 2019
PreviousIn a Recession, Put Deficit Concerns Aside
NextIn Case You Missed It...
Stay up to date
Receive the latest news and reports from the Center