The new Congressional Budget Office (CBO) analysis of President Trump’s 2019 budget shows how seriously his tax policies — particularly the 2017 tax law, which will cost $1.9 trillion over the next decade (and even more if policymakers make any of its temporary tax cuts permanent) — are eroding the nation’s revenue base.

CBO estimates that revenues will total just 16.5 percent of gross domestic product (GDP) in 2019 under the President’s tax policies, well below the 17.4 percent average over the last 40 years.  Further, that historical average includes years when the economy was weak and revenues were depressed. In 2019, CBO assumes the economy will be operating at its full potential (that is, at the maximum level of GDP that’s sustainable in the long term).   If you look only at years over the past four decades when GDP was at or above potential, revenues averaged 18.4 percent of GDP, even further above CBO’s projection for 2019 (see figure). 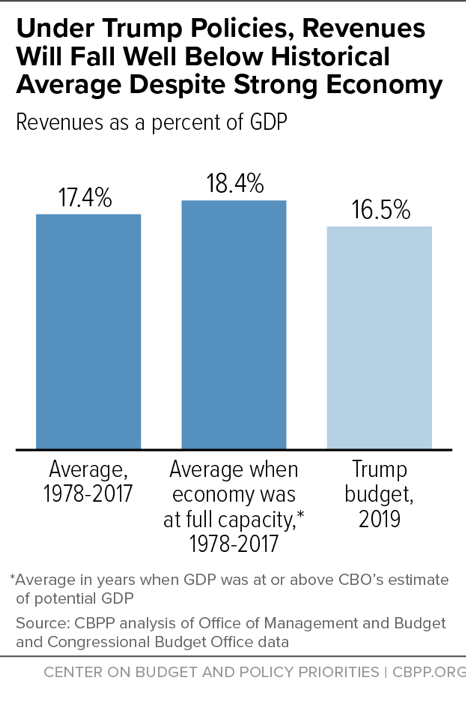 CBO projects that under the Trump budget, revenues will remain below the 40-year average for the next six years even if the economy remains strong.  Moreover, the Trump budget suppresses revenue growth after 2025 by making permanent the majority of the 2017 tax cuts that are scheduled to expire.

A revenue-to-GDP ratio that’s at or below the historical average is concerning at times when unemployment is low and the economy is running at or near full capacity.  It’s fiscally reckless now because we know that an aging population will significantly raise government retirement and health costs, making clear the need for revenues in the coming years to rise well above the historical average, as we’ve discussed.

Compounding the higher costs associated with these demographic realities, health care costs — in both the public and private sectors — have long grown faster than the economy and will likely continue doing so, partly due to new procedures, drugs, and treatments that improve health and save lives but also add to costs.  The pace of health care cost growth has slowed over the past decade, but we don’t know the extent to which the slowdown will persist.

Other factors will add to the fiscal pressures of future years, including higher interest costs on the national debt as well as the need to address unmet national needs ranging from infrastructure to child care.

By showing that the 2017 tax law helped put revenues on a risky path, the new CBO report should be a red flag for policymakers, underscoring the need to restructure that law to put revenues on a sounder footing.

Federal Spending and Revenues Will Need to Grow in Coming Years, Not Shrink

PreviousCanadian-Style Child Benefit Would Cut U.S. Child Poverty by More Than Half
NextIn Case You Missed It…
Stay up to date
Receive the latest news and reports from the Center