At Labor Day, Let the EITC Help All Low-Wage Workers

Bipartisan proposals to expand the Earned Income Tax Credit (EITC) for low-wage workers who aren’t raising children in the home would extend the EITC’s success to such workers in every state, as our new state-by-state data show.

That’s particularly important because while the EITC rewards the hard work of low- and moderate-income people by boosting their paychecks and reducing poverty in the process, this one group — low-wage workers who aren’t raising children in the home — is largely excluded from its benefits.  In fact, some 7.5 million people in this group are actually taxed into poverty.

On Labor Day, many of these low-wage workers will be serving meals in restaurants, ringing up back-to-school supplies at the mall, or driving a truck down the highway.  They deserve a decent day’s pay for a hard day’s work, but many of their paychecks are too small to make ends meet.  An expanded EITC that targets this group would do more to help deliver a decent day’s pay.

Fortunately, top policymakers of both parties recognize this problem with the EITC’s current design.  President Obama and House Speaker Paul Ryan have put forth nearly identical proposals to lower the eligibility age for the EITC for workers not raising children in the home to 21 and to raise the maximum credit for these workers to roughly $1,000.  These changes would make significant progress toward meeting the core principle that no American worker should be taxed into poverty, though they wouldn’t fully reach that goal.

Consider, for example, a 21-year-old laborer without children earning poverty-level wages of about $12,500.  He has $956 in payroll taxes deducted from his paycheck and pays $214 in federal income taxes.  Because the worker receives no EITC (childless workers under age 25 are ineligible), his taxes leave him $1,170 below the poverty line.  A 30-year-old woman making the same low wages in a retail store owes the same taxes and, though she qualifies for an EITC, her credit is only $184 — so she, too, is taxed into poverty.

These bipartisan proposals would give a needed boost to workers in low-wage jobs in every state in the country, as our data show. 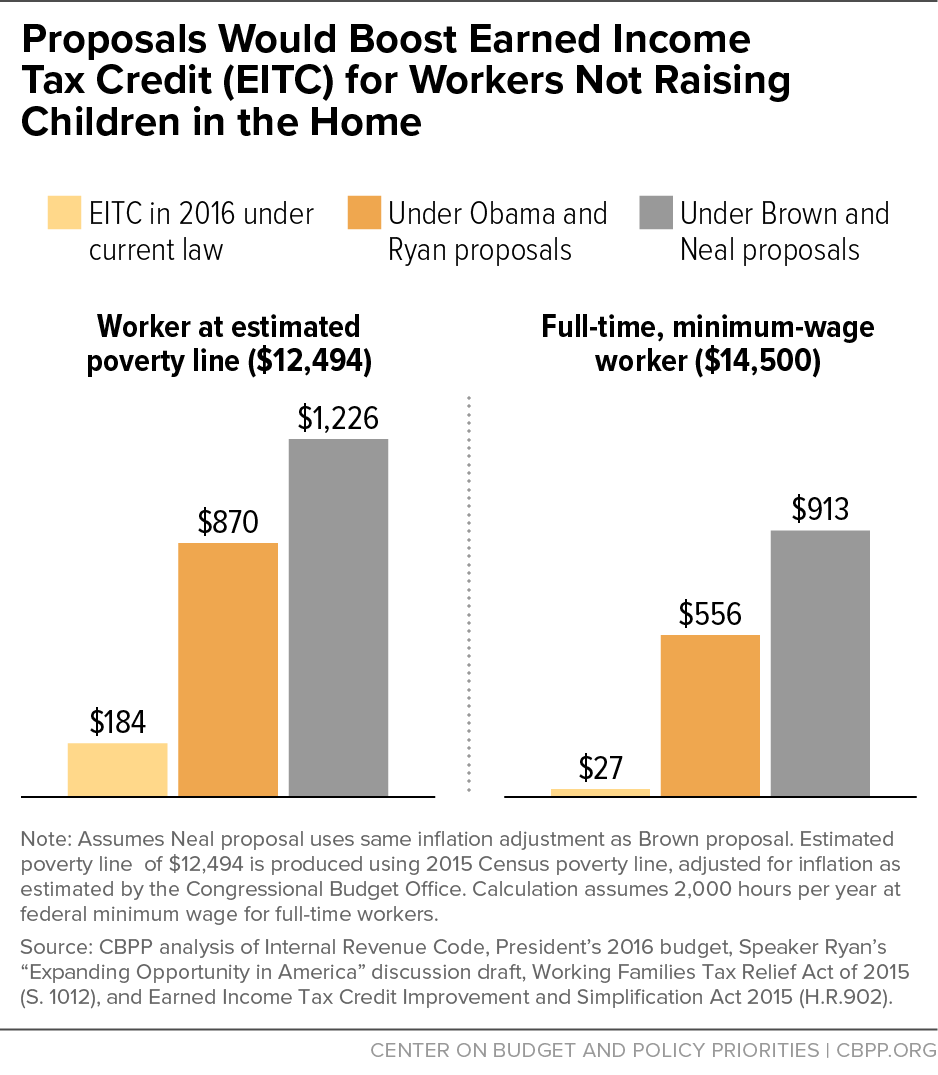 Figures are rounded to the nearest 1,000.  Estimates from CBPP analysis of data from the Office of Tax Analysis and three years of the American Community Survey (2012-2014).

a Numbers helped by the Ryan plan may be smaller than listed for some groups because the Ryan proposal does not extend eligibility to workers age 65 and 66, as the Obama plan does.

Obama Wisely Calls for Boosting the EITC for Childless Adults

May 24, 2016
PreviousState Data on Safety Net’s Impact, in One Place
NextIn Case You Missed It…
Stay up to date
Receive the latest news and reports from the Center