Policymakers should provide at least $100 million in additional funding for the Legal Services Corporation (LSC) for this fiscal year in the face of rising need, which would help low-income people cope with urgent legal problems arising from COVID-19 and the resulting economic crisis.

The LSC is a non-profit corporation that policymakers established to provide financial support for legal aid programs. It receives annual appropriations ($465 million in fiscal year 2021) that it distributes to more than 130 independent non-profit legal aid agencies across the country. Those grantees, in turn, provide legal assistance to people and families with incomes at or below 125 percent of the federal poverty line in non-criminal legal matters involving things like housing, family issues (e.g., adoption, child custody, domestic abuse, and divorce), access to health care, income support and other benefits, employment law, and consumer finance and debt collection.

The $100 million or so in additional funds would finance legal assistance to households facing eviction or foreclosure, to people who are wrongly denied the unemployment insurance or other benefits they urgently need, to survivors of domestic violence who need protective orders and the resolution of child custody and support matters, and to others of modest means who desperately need the assistance.

While policymakers gave the LSC a $50 million emergency supplemental appropriation for 2020 in the CARES Act of last March, the corporation had distributed that funding to its grantees by the end of April, leaving the LSC with no more funds for grantmaking for the rest of 2020. Meanwhile, the demand for services — and thus the need for additional funding — only grew.

The same will occur in 2021. The LSC has already distributed its 2021 appropriation to its grantees. At a time when need is growing so much due to COVID-19 and the economic downturn, the network of legal aid agencies the LSC supports can put any additional funding to good use.

As a general matter, the LSC is chronically underfunded. A 2017 study that it commissioned estimated that low-income Americans approached LSC-funded organizations for help with nearly 2 million legal problems that year, but these individuals received limited or no help with more than half of those problems because the organizations lacked funds. All told, the study found, 86 percent of the civil legal problems that low-income Americans reported in the past year received inadequate or no legal help from any source. 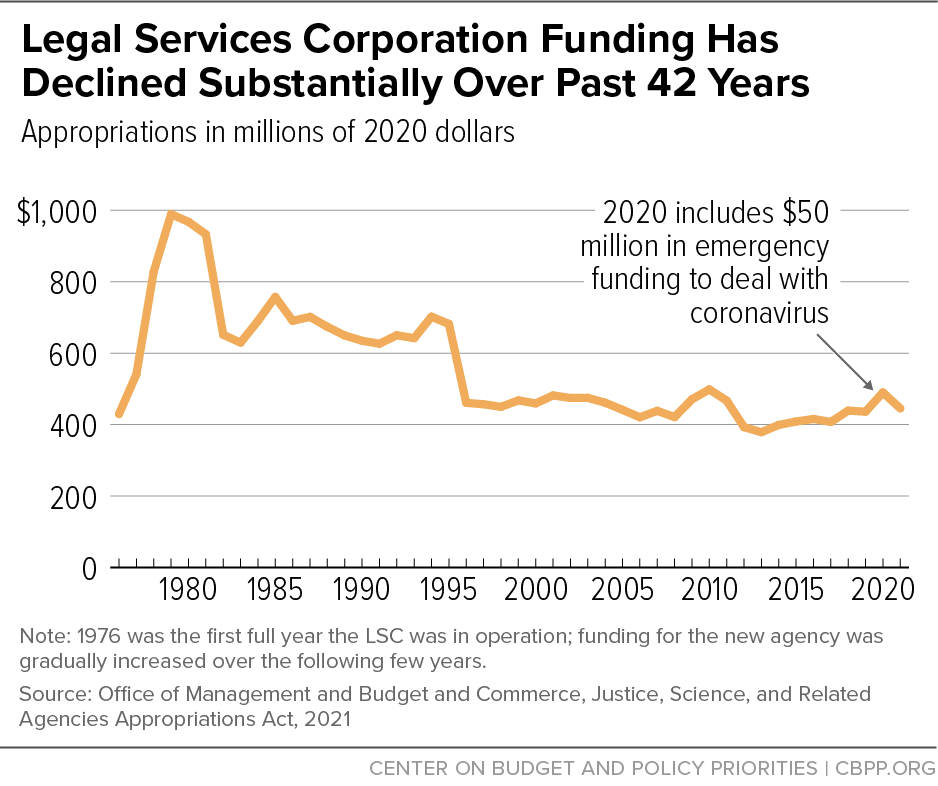 COVID-19 is driving the need for more legal assistance and making the funding shortfalls worse. People who lose their jobs may need help if their claims for unemployment insurance or other benefits are denied, or if they are pursued by creditors. People who have received extensive medical care may need help with insurance or medical debt collection issues. In times of economic stress like these, domestic violence and other family problems tend to increase — requiring, among other things, help with civil legal matters like separation, divorce, and child custody.

One big problem is the large number of households that have fallen behind on rent, raising the prospect of eviction. As recent Census data indicated, almost a quarter of adult renters who lost income due to COVID-19 were not caught up on their rent. Eviction moratoriums are in place nationally and in various localities, but the rules for moratoriums and eviction processes are often complex. In eviction proceedings, landlords are usually represented by lawyers while tenants generally are not — putting tenants at a serious disadvantage in a situation that could cost them their home.

The same is true for many other civil legal problems. Laws and procedural rules are generally complex and sometimes arcane. Low-income people are usually facing businesses, institutions, or government agencies that have specialized knowledge and lawyers when they need them. Legal aid programs help level that playing field a bit.

The LSC needs another supplemental appropriation now, one of at least $100 million and preferably double that, to cover backlogs and increased needs for at least a year. While vaccines and other measures will hopefully bring the pandemic under control, the legal problems it has spawned will likely continue far longer.

Issues of back rent, medical bills, consumer debt, benefit claims, and family problems will need to be resolved. Legal services for people who cannot afford to hire lawyers would help resolve those matters more easily and justly.

Rising Federal Debt Should Not Shortchange Response to COVID-19 Crisis

Wave of Evictions Nears as Moratorium Set to Expire

January 27, 2021
PreviousFor Struggling Renters: Housing Vouchers for All Who Need Them
NextStates to Get Enhanced Medicaid Funding Through 2021
Stay up to date
Receive the latest news and reports from the Center