| By Hannah Shaw and Chad Stone

As a result of the tax cut-unemployment insurance legislation that President Obama signed into law last week, economic forecasters have substantially upgraded their outlook for 2011 (see the box on page 2). An analysis of the compromise by Mark Zandi, the chief economist for Moody’s Analytics, indicates that this greater optimism stems largely from the longer extension of federal emergency unemployment insurance (UI) programs than forecasters had expected, the extension of various improvements enacted in 2009 in several tax credits for low- and modest-income families, and a reduction in the payroll tax. By contrast, the extensions of the upper-income Bush-era tax cuts and a substantially weakened estate tax will provide little or no boost to the economy in the short run; moreover, those extensions increase the risk that such measures will ultimately be made permanent and thereby deal a setback to efforts to restore long-run fiscal balance.

Many analysts, including the Congressional Budget Office[3] as well as Zandi, have found that in a weak economy, UI and refundable tax credits — and other measures that put money into the hands of hard-pressed individuals and families who will spend it — have a significantly larger impact on economic activity and job creation than tax cuts primarily benefiting high-income individuals, who are likely to save a large amount of any increase in income they receive. In the Moody’s Analytics model, extending unemployment insurance benefits generates $1.60 of additional GDP for each dollar of budgetary cost, while a permanent extension of all of the Bush-era income tax cuts generates only 35 cents in economic activity per dollar of cost. The “bang-for-the-buck” of just the upper-income tax cuts would be even smaller. Table 1 shows Zandi’s estimates for these and other prominent measures in the compromise legislation. 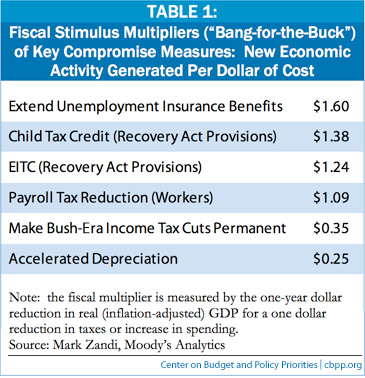 Fiscal multipliers measure how much additional economic activity is generated per dollar of budgetary cost. The economic impact of a package of measures thus depends on the size of each of the components of the package and their respective fiscal multipliers. The bipartisan measures that most forecasters were already assuming would be enacted were proposals that have modest bang-for-the-buck but involve a lot of bucks. Allowing all of them to lapse at the end of this year thus would have dealt a blow to a fragile economic recovery, and this concern motivated the effort to come up with a compromise to prevent that from occurring.

The political compromise involved the White House swallowing a two-year extension of the upper-income tax cuts and a weakening of the estate tax in return for a full-year extension of both federal unemployment insurance and various targeted low- and middle-income tax cuts enacted in 2009 and a business “expensing” tax incentive the President had proposed in September. Republican negotiators would not accept an extension of the Making Work Pay tax credit created by the 2009 Recovery Act, but they agreed to accept the payroll tax reduction as an alternative and the President’s proposed business tax cut. Missing from the discussion were policies to increase government spending for infrastructure or other purposes or to provide further fiscal assistance to state and local governments — measures that have more bang-for-the-buck than most tax cuts do. [4]

The inclusion of a 13-month extension of federal unemployment benefits and a two-year extension of several tax cuts targeted primarily to low- and modest-income households, as well as the new payroll tax reduction, is central to the added economic boost that analysts now expect to occur, which is leading them to raise their forecasts for economic growth and job creation in 2011. This can be seen clearly in Zandi’s analysis of the compromise legislation, by comparing his estimate of what the economy would look like if only the “Democratic” measures in the package had been incorporated into his pre-compromise forecast with what the economy will look like with all of the compromise measures included. [5] The results are striking, as Table 2 shows. 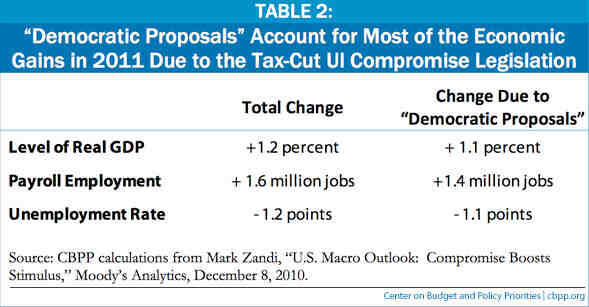 This pattern — higher levels of economic activity, higher payroll employment, and lower unemployment rates after 2011, but also lower economic growth rates and smaller increases in payroll employment and reductions in the unemployment rate — is an intended feature of the package, not a “bug.” Deficit-financed economic stimulus is a temporary policy to reduce the amount of economic slack in a weak economy and to restore sustainable high-employment growth more quickly. It is not meant to be kept in place indefinitely.

There is tremendous waste in an economy that operates with substantial excess unemployment and idle productive capacity. The goods and services not produced while the economy is in a protracted slump are lost forever, as is the income that workers do not earn when they are unemployed and that companies do not receive when their stores are empty and their factories and machines are idle. Lost income also means lost government revenue and larger budget deficits.

Until a strong, self-sustaining recovery is underway, well-targeted government expenditures and tax cuts can reduce this waste by generating more economic activity than there would be without such stimulus and by putting people back to work faster.

Of course, such stimulus also increases the budget deficit. It is misguided to try to offset this budgetary impact in the short term, since contemporaneous increases in taxes or reductions in expenditures would undermine the job-creating impact of the stimulus measures. But if possible, it would make sense to offset the budgetary impact with well-designed deficit-reduction measures that take effect down the road, when the economy is stronger.[7] Regardless of whether policymakers offset the cost, stimulus measures should be temporary so that they do not contribute to long-term structural deficits.

The real 2012 problem is the danger that the upper-income tax cuts and weakening of the estate tax will be extended again and subsequently made permanent. Unlike supporters of federal unemployment insurance benefits, who acknowledge that this program should end once the economy is back closer to full employment,[8] supporters of the high-end tax cuts and shrunken estate tax can be expected to push to make these provisions permanent — and to fight hard to keep them from expiring on schedule at the end of 2012.

Zandi’s analysis of the compromise legislation focuses on the short-term impact of the package. However, the earlier Zandi analysis requested by CBPP highlights the trade-offs between various policy options over both the short term and the longer term.

For the short term, Zandi compared the impact on the economy of two different policy packages: a) extending the upper-income tax cuts for two years but not continuing federal UI beyond its expiration on November 30, 2010; and b) extending federal UI for one year and the Obama tax credit improvements enacted in 2009 (the child tax credit expansion, EITC improvements, and higher education credit) for two years, while allowing the upper-income tax cuts to expire on December 30, 2010.

These two competing policy packages would each cost about $100 billion. But Zandi found that, relative to Moody’s pre-compromise economic baseline, [9] they would have very different economic effects. As shown in Table 3:

The longer-term analysis of the trade-off between upper-income tax cuts and UI/targeted tax cuts that Zandi conducted at our request also looked at the following two scenarios:

(This comparison did not include the provision of the new law that weakens the estate tax. If a permanent extension of the weakened estate tax had been included in the first option above, along with the permanent extension of the upper-income tax cuts, the longer-term deficit would have been made significantly worse, but there would have been no significant difference in the impact on economic performance in the 2010-2015 period.)

Table 4 shows the effect of these alternative scenarios, relative to Moody’s pre-compromise economic forecast. Zandi finds that the “Democratic” measures would produce a significant boost to the economy in 2011 and 2012, compared with the “Republican” measures. His analysis also shows the large increase in budget deficits and debt associated with the upper-income tax cuts. Compared with making the upper-income tax cuts permanent, a set of proposals similar to the “Democratic” measures in the compromise legislation would:

Analysis of the impact of the compromise legislation on the economy and the budget, as well as analysis of the impact of alternative policy scenarios, illustrate that unemployment insurance benefits and refundable tax credits are much more powerful than upper-income tax cuts in stimulating economic activity and job creation in a weak economy. The inclusion of high-income tax cuts and a weakened estate tax may have been politically necessary to produce a deal that includes measures that should give the recovery a needed boost. But it is critically important that policymakers allow these tax cuts to expire on schedule at the end of 2012. These tax measures will provide little meaningful help in digging the economy out of the deep hole left by the 2007-2009 Great Recession, and if extended again, will add significantly to the burden of addressing the nation’s serious long-term fiscal imbalances.

[7] Finding politically feasible offsets for fiscal stimulus is often difficult and time-consuming and can prove politically impossible. When that is the case during a major economic downturn, it is sounder policy to provide temporary, well-targeted stimulus even without offsets than to let the economy remain weak, since the immediate economic damage from inaction would be substantial, while the long-term fiscal impact of temporary, well-targeted stimulus measures is small. See James R. Horney and Chad Stone, “Don’t Let the Ideal Prevent the Necessary: Why Offsets Are Not Needed for Temporary Economic Recovery Legislation,” Center on Budget and Policy Priorities, March 3, 2010, https://www.cbpp.org/cms/index.cfm?fa=view&id=3101.

[8] How long and in what form federal emergency unemployment insurance benefits are continued should be based on how quickly labor market conditions are improving, not on an arbitrary calendar date. Such programs have always been temporary. See Chad Stone and Hannah Shaw, “Emergency Unemployment Insurance Benefits Remain Critical for the Economy,” Center on Budget and Policy Priorities, November 10, 2010.

[10] An employer who might not have created a new job until 2012 in the absence of the stimulative policy but instead creates it in 2011 would be responsible for creating one job-year, even though the job itself might be a permanent position. That permanent job would count as an increase in employment due to the policy in 2011, but not in 2012 or subsequent years.

[13] Official estimates of the budgetary cost of specific policies do not include any “feedback” effects on the deficit from changes in macroeconomic conditions induced by the policy. That is because there is no straightforward or widely accepted way to conduct such “dynamic scoring.” The dynamic feedback effects reported here are unique to the Moody’s Analytics models, although similar models would likely produce similar estimates.

[14] In 2011 and 2012, its years of maximum impact on jobs and the economy, the UI/refundable credits/job credit policy would add more to the deficit than making the high-income tax cuts permanent would.

[15] Adding up the percentage point increases in GDP over the 2010-2015 period, the cumulative reduction in economic slack is 2.0 percentage-point-years of GDP.