Over 500,000 Workers Are Out of Jobs – and Prematurely Out of Benefits

Tens of thousands of unemployed workers in New Jersey, Nevada, and Rhode Island were cut off of their final unemployment insurance (UI) benefits this week, as federal UI benefits continue to wind down. Over most of the past three years, additional weeks of UI benefits were available for those searching for work but unable to find a job in states facing high unemployment.  However, as I’ve explained in recent posts, program changes enacted when policymakers extended federal UI at the beginning of the year have begun to take effect, cutting the number of weeks available in many states – and prematurely ending UI benefits for many people still looking for work. Most states offer up to 26 weeks of UI benefits through their regular programs. As we’ve explained, additional benefits have been available through two programs: the temporary Emergency Unemployment Compensation program and the permanent Extended Benefits (EB) program.  Taken together, the programs offered unemployed workers up to 99 weeks of benefits in many of the states with very high levels of unemployment. New Jersey, Nevada, and Rhode Island were the final three states offering 20 weeks of EB (13 weeks of EB benefits remain available in Idaho, where the unemployment rate is lower).  This means that for the first time since June 2009, no state has up to 99 weeks of UI benefits available. This week’s change affects more than 44,000 UI recipients, bringing the total number who have lost benefits since the beginning of the year to 511,000 (see table).  As we’ve explained previously, benefits have ended in these states not because economic conditions have improved, but because they have not significantly deteriorated in the past three years. 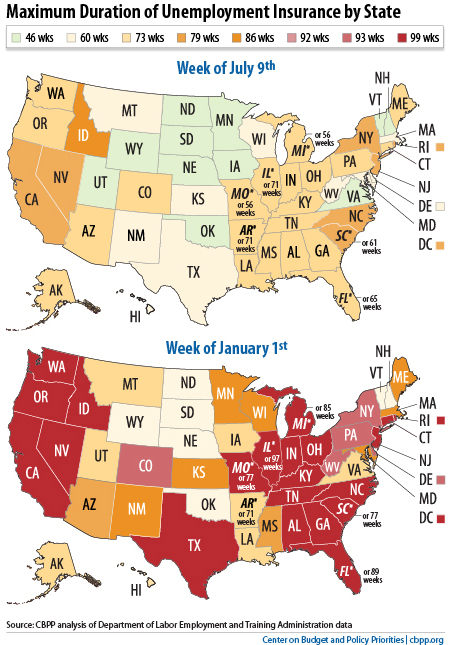