War and Anti-Terrorism Spending or Rampant Growth In Domestic Programs

What Has Caused the Large Increases in Appropriations Bills Since 2001?

“[C]onservatives have complained about the 31.5 percent growth in discretionary spending since Bush took office. [1] …the conservative Heritage Foundation's analyst said that "no matter how you massage the numbers it's still a 27 percent increase in two years."… [He] said that with enactment of the FY04 omnibus, outlays would jump another 9 percent to $900 billion.” [2]

Are appropriations growing at out-of-control rates? Is the growth occurring in domestic programs or is it overwhelmingly for defense and related war and terrorism expenses? Do this year’s appropriations bills continue the trend? And what do these figures have to do with deficits? This brief analysis summarizes the facts.[3]

When assigning credit or blame to a particular Congress or President for the level of appropriated programs, one must examine funding rather than expenditures, because funding is enacted by Congress for a specific year, while as much as two-fifths of expenditures for discretionary programs in any year come from funding enacted in prior years. The citation above refers to a 31.5 percent increase in funding and a 27 percent increase in expenditures for appropriated programs from 2001 to 2003; if the issue is the accountability of elected officials, the 31.5 percent funding figure is the one to use.

Furthermore, measured as a share of the economy, funding for domestic discretionary programs outside homeland security has barely budged.

How Quickly are Expenditures Rising this Year? As noted, as much as two-fifths of expenditures for discretionary (i.e., non-entitlement) programs in any year derives from funding appropriated in prior years. Expenditures may rise in a given year even if funding falls, if funding increases enacted in previous years are still working their way through the “budget pipeline.” For this reason, measuring expenditure growth in fiscal year 2004 is not the best way to decide if this year’s appropriations bills are excessive.

Nevertheless, the expenditure growth rates for 2004 may be instructive. 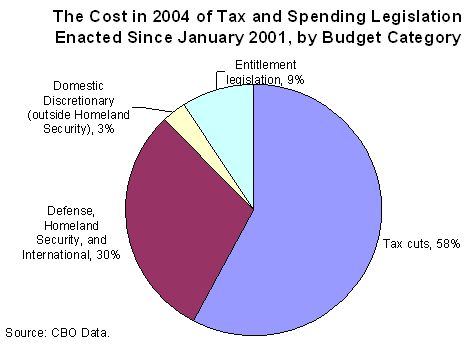 Does Spending Growth Increase the Deficit? Yes. So do tax cuts. So does deterioration in the economy.

Figures Behind the Analysis [5]

When comparing program size from year to year, the raw data (the nominal figures) may be the least appropriate measure, because they do not take into account factors such as inflation and economic growth. The longer the time period, the more important it is to adjust older figures to make them comparable to newer data. Nevertheless, because the Administration and institutions like the Heritage Foundation often compare figures over time without any adjustment, we present the data here in three ways: in nominal terms (i.e., with no adjustments); after adjusting for inflation (using the Consumer Price Index)[6]; and after adjusting for economic growth (i.e., as a share of the economy).[7]

The first set of tables show funding, or “budget authority” — that is, the amounts appropriated by Congress in the annual and supplemental appropriations bills each year. The second set of tables show expenditures that flow each year from funding provided in that year or prior years. As much as two-fifths of expenditures in any given year are derived from funding appropriated in prior years.

These tables may provide more comparisons than some readers can use. We present these figures for two purposes — first, so readers confused by the calculations that various institutions are circulating can make the comparisons that they believe to be the most salient, and second, to document that no matter how the figures are calculated, the increases in funding for defense, international affairs, and homeland security far surpass those for domestic discretionary programs outside homeland security.

[3] For more detail, see Greenstein, Kamin, Kogan, and Friedman, Is Domestic Spending Exploding? An Assessment of Claims by the Heritage Foundation and Others, Center on Budget and Policy Priorities, revised February 1, 2004, and Kogan, The Omnibus Appropriations Bill: Are Appropriations For Domestic Programs Out of Control? February 1, 2004, Center on Budget and Policy Priorities.

[4] In this analysis, we include appropriations for the cleanup and reconstruction of New York City after 9-11 within the category “defense, homeland security, and international affairs.”

[5] As explained in Kogan, op cit, the funding or “budget authority” data have been adjusted to account for scoring anomalies and gimmicks. These adjustments increase the total amount of funding relative to the amounts shown by CBO and OMB, but have little effect on the growth rates from 2001 to 2004 or from 2003 to 2004. All estimates are by CBO except for homeland security expenditure figures for 2001 and 2002 and expenditure estimates associated with funding for reconstructing New York City. CBO’s overall expenditure estimates do not show this level of detail, so we have estimated the outlays for those items based on CBO’s funding data.

[6] Adjusting appropriated funding for inflation is the approach that CBO takes when constructing its baseline. CBO does not simply adjust funding for changes in the CPI; it uses more complex inflation factors. Over time, however, CBO’s results are quite similar to a simple CPI adjustment.