| By Chuck Marr and Gillian Brunet

Last night, the Senate released legislative language for the tax cut-unemployment insurance compromise negotiated between President Obama and Congressional Republicans. The Joint Committee on Taxation (JCT) released an official cost estimate for the revenue portions of the bill shortly thereafter. These graphs illustrate the various components of the legislation and their costs.

Costs common to all proposals for extending the 2001 and 2003 tax cuts. This category includes provisions that both parties had already called for extending before the compromise was reached: $384 billion for extension of the “middle-class” tax cuts and AMT relief, $46 billion to preserve the estate tax at its 2009 rate of 45 percent and exemption level of $3.5 million per person ($7 million per couple), and $56 billion in regular tax “extenders,” mostly for businesses. The compromise extends all of these provisions through 2012, except AMT relief, which is continued through 2011. As we have previously explained, the “middle-class” tax cuts do not benefit only the middle class — high-income households benefit from these provisions, as well.[1]

We count extending the 2009 estate tax rules as a cost common to previous proposals.[2] The House voted last year to continue the estate tax at the 2009 levels (H.R. 4154), and the Senate voted 56-43 to extend the 2009 rules the last time it voted on a budget resolution.

High-income tax cuts and weakening the estate tax beyond 2009 rules. This includes $116 billion for the tax provisions from 2001 and 2003 that benefit only high-income households: the reductions in the top two marginal tax rates (from 39.6 percent to 35 percent 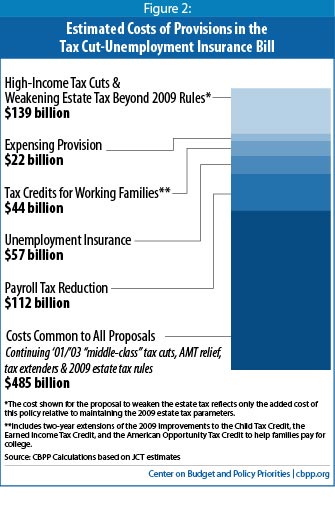 Unemployment insurance. The compromise would continue the federal emergency unemployment insurance (UI) program through the end of next year. This program, which provides additional weeks of benefits to unemployed workers searching for a job, expired on November 30. The continuation of the program would preserve federal UI benefits for an estimated 7 million workers by December 2011.

Tax credits for working families. This includes a two-year extension of the 2009 improvements to several tax credits benefiting low- and moderate-income families: $20 billion for the improvement to the Child Tax Credit, which particularly helps working parents earning the minimum wage or just above; $7 billion for improvements to the Earned Income Tax Credit (EITC) that reduce the marriage penalty for low-income couples and provide families with three or more children with a modestly larger credit; and $18 billion for the American Opportunity Tax Credit, which helps lower- and middle-income families pay for college.

Expensing provision. This provision would extend 100 percent bonus depreciation (expensing) for capital purchases through the end of 2011, and allow businesses to take 50 percent depreciation for such purchases in 2012. JCT estimates that expensing would cost about $110 billion in 2011 and 2012, but that the federal government will recoup all but $22 billion through higher revenues in 2013 through 2020. The provision essentially accelerates tax deductions that firms would have taken in subsequent years.