PDF of this report 8pp.

This is because the 2001 tax law’s reductions in the lower tax brackets benefit not only people whose incomes fall within the lower brackets but also those whose incomes exceed those brackets. In fact, high-income people actually receive much larger benefits in dollar terms from the so-called “middle-class tax cuts” than middle-class people do.[1]

The middle-class tax-cut package the Joint Tax Committee analyzed does not extend the reduction in the tax rate on dividends for couples with incomes over $250,000 (and singles over $200,000). President Obama has proposed, however, that the dividend top rate for high-income people be permanently set at 20 percent, rather than being allowed to return to its pre-2001 level of 39.6 percent. If Congress follows that approach and incorporates this proposal into a middle-class tax-cut package, the average tax cut that high-income households will receive from enactment of such a package will be considerably larger than the figures just cited, and the dollar amount by which the average tax cut going to high-income households exceeds the average tax cut for middle-income households will be significantly larger, as well.

Analysis by the Urban Institute-Brookings Institution Tax Policy Center tells a similar story. The Tax Policy Center (TPC) recently analyzed the average tax cut that households at different income levels would receive from a number of the specific provisions of the 2001 tax cut, as well as from continuation of Alternative Minimum Tax (AMT) relief. TPC found that:

And although some observers have warned that the AMT) is becoming a middle-class tax, the temporary “patches” that Congress has passed to keep its reach from extending further actually benefit affluent people far more than those truly in the middle. Extending the AMT patch would provide an average of $2,035 in tax savings for couples making between $200,000 and $500,000 as compared to an average tax reduction of $123 for people making between $50,000 and $75,000.[4]

In short, the nation’s top 2 percent of households will receive much larger tax cuts (in dollar terms) than the middle class even if Congress extends only the middle-class tax cuts.

The “middle-class tax cuts” are generally understood to include: 1) the 2001 tax law’s creation of the 10 percent tax bracket and tax-rate reductions in other brackets (but not the law’s rate reductions in the top two brackets), 2) the law’s marriage penalty relief, 3) its expansion of the Child Tax Credit, and 4) a “patch” that Congress has enacted each year since 2001 to prevent a large increase in the number of households subject to the AMT. With the exception of the child credit expansion, high-income people not only benefit from these tax cuts but receive a larger dollar benefit from them, on average, than middle-class people.

The table below lists the marginal tax rates for 2011 both under current law (that is, if all of the 2001 tax cuts expire as scheduled at the end of 2010) and under an extension of the “middle-class” rate reductions. (These rates reflect the rate at which an additional dollar of income is taxed. They do not reflect the percentage of a taxpayer’s overall income that he or she owes in income tax; those percentages are much lower than the marginal tax rates shown in the table, because all of the rest of a taxpayer’s income) — i.e., all of it other than the portion of income that falls into the top tax bracket the taxpayer faces — is taxed at lower rates. Average tax rates are also lower than marginal tax rates because almost every taxpayer benefits from personal exemptions, the standard or itemized deductions, and/or tax credits.)

This crucial distinction is often overlooked. It is perhaps best explained through a metaphor: the income tax operates as a staircase, not an elevator. This means that people who make $1 million a year do not go directly to the top “floor” (i.e., to the top tax rate, currently 35 percent) but instead take the “stairs,” paying tax on the first increment of taxable income at 10 percent, paying tax on the next increment at 15 percent, and so on until reaching the top rate.

The 2001 tax law also created a new 25 percent bracket to replace part of the 28 percent bracket. For married couples, taxable income between $69,700 and $140,600 will be taxed at this 25 percent rate in 2011, assuming the middle-class tax cuts are extended. Let’s consider how this bracket affects three illustrative households, all married couples with two children. (See the appendix for a discussion of the methodology used in computing tax cuts for the illustrative households.) 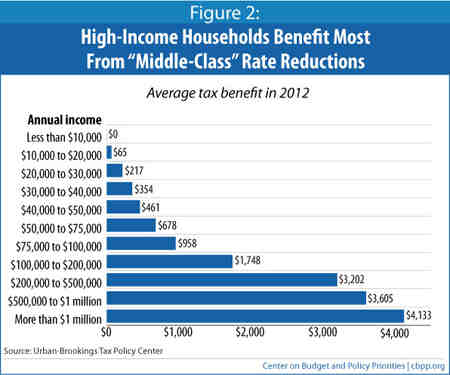 The other middle-bracket rate change in 2001 lowered the 31 percent rate to 28 percent. In 2011 for married couples, taxable income for between $140,600 and $214,250 is taxed at this 28 percent rate. The benefits of this change are even more skewed toward high-income households. Consider the same three households just described.

The standard deduction and EITC changes have little effect on high-income people, who tend to itemize deductions and are ineligible for the EITC. However, the other change — the raising of the point at which the 15 percent tax bracket ends for married filers and a higher tax rate kicks in — provides a tax cut for people higher up the income scale while having no effect on many middle-class couples. More than three-fifths of all couples — those with taxable incomes under $58,200 in 2011 — would be in the 15 percent bracket even without the increase in the income level at which that brackets ends, and they consequently do not benefit from an increase in that level. Meanwhile, couples with very high incomes receive the maximum benefit from this provision.

The expansion of the Child Tax Credit is the one major “middle-class” tax cut that does not affect high-income people, because this credit begins phasing out for couples with incomes above $110,000. It phases out entirely at $$150,000 of income for a married couple with two children.

The AMT is a parallel tax system designed to ensure that high-income people do not qualify for so many tax breaks that they pay little or no income tax. Over time, however, its impact has begun to drift down the income scale because the AMT parameters in the tax code are not indexed to inflation.

Since 2001, Congress has repeatedly enacted temporary “patches” that increase the amount of income exempt from the AMT, thereby effectively providing an ad hoc inflation adjustment and avoiding a large increase in the number of taxpayers affected. Tax Policy Center analysis has shown that the benefits of continuing to “patch” the AMT each year are the highest for people with incomes between $200,000 and $500,000. Their average benefit from the annual AMT patch is $2,035, compared to $123 for taxpayers with incomes between $50,000 and $75,000.

High-income people benefit significantly from the “middle-class” tax cuts. They will continue to receive substantial tax cuts if Congress extends the middle-class tax cuts while allowing the high-income tax cuts to expire on schedule at the end of this year. Indeed, if policymakers follow this route, people making more than $1 million will receive more than five times the tax cut benefit, in dollar terms, as a middle-class family making $50,000 to $75,000.

Measuring the Benefits of Particular Tax Cuts for the Illustrative Households

The Tax Policy Center, in its estimates of the distributional impact of the various tax cut provisions, uses the sequential approach. Under this methodology, the tax benefits from each individual provision (or set of provisions) add to the total benefits from the Bush tax cuts as a whole, because the sequencing or “stacking” captures all interactions between the provisions.

One issue with this methodology is that the benefit from a given provision can vary significantly depending on its placement in the sequence — in other words, whether it is considered before, or after, other provisions. While alternative sequences would always produce the same totals, they might result in very different tax benefits attributed to each individual provision.

To calculate the tax cuts from individual provisions for the three illustrative households in this paper, we applied the other approach: measuring the impact of each provision individually. Specifically, we assumed that all of the middle-class tax cuts remain in place for 2011 and then calculated the increase in the household’s tax burden if a particular provision were removed. This approach is helpful for illustrating the benefits of a particular provision for households in a given point in the income distribution because the tax benefit does not depend on the provision’s place in the sequence.

The drawback of measuring the impact of each provision individually is that it does not capture the interactions between provisions. This means that the total benefit an illustrative household will receive from the entire package of tax cuts will not necessarily be reached by adding the benefits from each provision.