Is the Threatened Veto Justified?

The Bush Administration has threatened to veto almost all appropriations bills that provide more funding than the President has requested, such as the bill funding the Departments of Labor, Health and Human Services, and Education for fiscal year 2008, which starts October 1.  The President has described congressional appropriations plans as “irresponsible” and “excessive,” declaring that he will “use my veto to stop … runaway spending…”[1]  The Director of the President’s Office of Management and Budget recently described the Labor-HHS-Education bill as the “most problematic” of the appropriations bills and yesterday stated he will recommend it be vetoed.[2] (The Senate and House Appropriations Committees have each approved a version of the bill, which funds such programs as Head Start, child care, Title 1 education for the disadvantaged, Pell Grants, and the National Institutes of Health.)

The results show that after adjusting for inflation and population growth, the appropriations bills the President is likely to veto — including the Labor-HHS-Education bill — would cost less in 2008 than the corresponding bills cost, on average, during 2002-2006.  (See Table 1.)  We also find that the appropriations bills that the President will likely sign will cost considerably more overall in 2008 than those bills averaged in 2002-2006.

In short, the President will likely sign those appropriations bills that are more costly than in the past (after adjusting for inflation and population growth).  Yet he is likely to veto — purportedly on fiscal grounds — those appropriations bills, such as the Labor-HHS-Education bill, whose costs are lower than the corresponding bills he signed in the past.  Specifically: 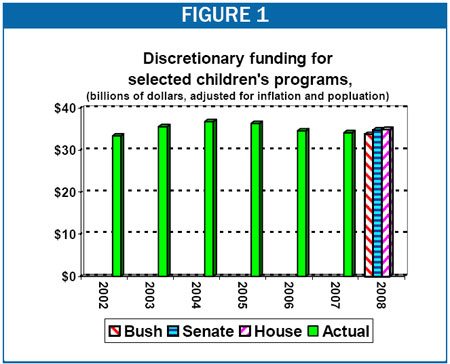 The Administration has signaled that the President is likely to veto a total of seven appropriations bills for budgetary reasons.  In addition to funding for the Departments of Labor, Health and Human Services, and Education, these vetoes are likely to cover discretionary funding for the Departments of Agriculture, Commerce, Energy, Homeland Security, Housing and Urban Development, Interior, Justice, Social Security, and Transportation, as well as the Environmental Protection Agency, the Army Corps of Engineers, NASA, the National Science Foundation, the Smithsonian, and the Corporation for Public Broadcasting, among other independent agencies.  The Administration has not threatened to veto the other five appropriations bills — covering agencies such as the Departments of Defense, Veterans’ Affairs, State, or Treasury — over the level of funding they provide.  (The Administration has threatened to veto one or two of those bills over policy issues not related to funding levels, such as abortion restrictions, but for ease of discussion we categorize these bills as “likely to be signed.”)[3]

Ironically, for the appropriations bills whose 2008 funding is acceptable to the Administration, Congress plans considerable increases over the 2002-2006 levels.

During the period from 2002 through 2006, federal deficits averaged 2.6 percent of GDP.  In contrast, the deficit for 2008 is likely to be roughly 1.5 percent of GDP.  It is unclear why, if it was fiscally prudent for the President to sign Labor-HHS-Education appropriations bills during 2002 through 2006 — when the bills were more expensive and the deficit was higher — it is fiscally imprudent to sign the 2008 Labor-HHS-Education appropriations bill.

Because the President is likely to sign appropriations bills whose costs are substantially increasing (after adjusting for inflation and population growth), but is likely to veto appropriations bills whose costs are lower than they averaged in the past, it is difficult to conclude that his vetoes are motivated by a desire to restore fiscal discipline and halt “runaway spending.”  (One also can question claims of fiscal discipline by noting that the Administration advocates the extension of tax cuts whose annual costs are ten times as great as the amount of appropriations funding that is in dispute.)

Observers should seek other explanations for the threatened vetoes.  The possible motivations may include a desire to make Congress look ineffective and to exert Presidential power.  To override a veto, both the House and Senate must amass two-thirds “super-majorities.”  Since the new majority party commands only 53 percent of the House seats and even a smaller share of Senate seats,[4] the President can — by vetoing legislation — frustrate the policies of the new majority and strengthen claims that Congress has a poor track record of accomplishment.  He also can make himself a major player despite his lame-duck status and decline in popularity.  Finally, he can appeal to a conservative base that harbors strong anti-government sentiments and still resents his approval of various domestic appropriations bills in previous years.

[note] The author wishes to acknowledge the extraordinary contributions of Matt Fiedler, Kris Cox, and Jon Petkun of the CBPP staff in preparing data for this analysis.

[3] As of July 18, the Administration had issued explicit funding veto threats against four bills in “Statements of Administration Policy:” the Labor-HHS-Education bill, the Interior and Environment bill, the Energy and Water Development bill, and the Homeland Security bill.  For three other appropriations bills that will include more funding than the President requested, the Administration has not yet issued a formal “Statement of Administrative Policy.”  These are the Agriculture bill, the Commerce-Justice-Science bill, and the Transportation-HUD bill.  We treat these three bills as subject to the general veto threat that OMB Director Portman issued on May 11 because their funding level exceeds the amount the Administration has requested, bringing the total number of appropriations bills that may be vetoed to seven.  (The one exception appears to be that a veto threat will not be issued if the Republican leaders in Congress inform the White House that a veto of a bill can not be sustained, as in the case of the Military Construction-Veterans appropriations bill.).

In the case of the State and Foreign Operations appropriations bill and the Financial Services appropriations bill, congressional funding levels have not prompted either an explicit or implicit veto threat; these two bills are smaller than the President requested.  While certain policy changes included in these bills — such as providing aid to international family planning organizations — have prompted veto threats, this analysis is concerned with funding levels and veto threats based on claims of “excessive” funding.  The Administration has indicated it will sign these bills at their planned funding levels if the policy changes to which it objects are resolved; we therefore do not include these two bills as facing a veto because of excessive funding.

[4] The Senate currently has 49 Republicans, 49 Democrats, and 2 Independents who caucus with the Democrats.  In cases of tie votes, Vice President Cheney is permitted to break the tie.