Chairman Kline, Ranking Member Miller, and members of the Committee, I thank you for the opportunity to testify today and applaud you for holding this hearing on the issue that matters most to most Americans right now: opportunity, jobs, and the living standards of the broad middle class.

The current economy continues to expand in real GDP terms, as has been the case since the second half of 2009.  Employment growth turned positive in March of 2010, and since then the private sector has added 3.2 million jobs on net; including the public sector, net job growth is 2.7 million.  As the two figures below show, the rate of GDP contraction and job losses diminished shortly after the interventions of both the federal government through the Recovery Act, and the Federal Reserve, through monetary stimulus.

Moreover, nonpartisan research like that of the Congressional Budget Office has shown that government and Federal Reserve policies have played an integral role in this reversal. 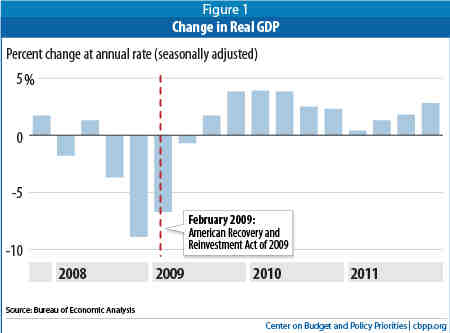 Yet, while the economy is moving in the right direction, and has even developed some momentum in recent months—the unemployment rate fell by almost one percentage point last year, from 9.4 percent to 8.5 percent; the more comprehensive underemployment rate fell by 1.4 points, from 16.6 percent to 15.2 percent—the underlying growth rate of the expansion is still too slow to deliver middle-class families the economic opportunities they need to meet their family budgets, much less to get ahead.

As the President stressed in his State of the Union address, private sector employers have been adding net new jobs every month for close to two years, over three million so far.  Of course, many more jobs were lost in the great recession, and I suspect that every policy maker in this room wants to see that growth rate accelerate.

Growth and the Middle Class: Necessary But Not Sufficient

Yet, if we’re talking about middle-class economic prosperity, we must recognize that the growth is necessary yet not sufficient.  GDP or productivity growth alone has not sufficiently lifted the incomes and living standards of the middle class (the next section explore the feedback loop between middle-class prosperity and a stronger economy).  This is a long term problem, though it was especially evident in the business cycle expansion of the 2000s.  Measuring from annual peak-to-peak years of the cycle—2000-2007—productivity grew 2.5 percent per year on average (19% overall) in those years and real GDP grew 2.4 percent per year (18% overall) but the real income of middle-class, working-age households fell half-a-percent per year, or 3.4 percent (see figure).

Middle-class income trends were much more favorable in the 1990s.  Though the real income of working-aged households fell in the recession of 1990-91, it soon reversed course and grew 10 percent—an addition of about $5,600 dollars in today’s dollars—over the full cycle.  Employers added 22.7 million jobs over the 1990s cycle, compared to 5.5 million over the 2000s cycle.[1]

I raise this comparison here to a few reasons.  First, the national economic policy backdrop was very different over these two decades.  In the 2000s, policy makers aggressively adapted supply-side,
trickle-down measures, characterized by large tax cuts favoring the wealthy, deregulation under the assumption that financial markets would self-monitor, and persistent budget deficits even during an expansion.

Fiscal and tax policies were especially different in the 1990s, as taxes were raised on the wealthiest and cut for the poorest among us, and the fiscal budget achieved multi-year surpluses for the first time since the 1950s.

Second, these observations are highly germane to the current national debates over jobs, oversight of financial markets, and tax policy.  Supply-side, trickle down arguments are particularly resurgent, despite the evidence noted above.  One is tempted to recall the admonition that those who forget the past are doomed to repeat it.

Third, these comparisons raise the critical question of what measures would be most advantageous for this committee to pursue in terms of reconnecting growth, productivity, and middle class prosperity.  I will speak to this question in the last part of my testimony, but first, let us examine the other side of that question.

Middle Class Prosperity and the Health of the Economy

The trickle-down, deregulatory agenda—what I have called YOYO, or “you’re on your own” economics—presumes that the growth chain starts at the top of the wealth scale and “trickles down” to those at the middle and the bottom of that scale.  But there is another theory, supported by evidence like that above, suggesting that a much better way to generate robust, lasting, and broadly shared growth is through an economically strengthened middle class.

At the most basic level, this growth model is a function of customers interacting with employers, business owners, and producers.  A recent article by highly successful venture capitalist Nick Hanauer described this interaction as follows:

I’ve never been a “job creator.” I can start a business based on a great idea, and initially hire dozens or hundreds of people. But if no one can afford to buy what I have to sell, my business will soon fail and all those jobs will evaporate.

That’s why I can say with confidence that rich people don’t create jobs, nor do businesses, large or small.  What does lead to more employment is the feedback loop between customers and businesses. And only consumers can set in motion a virtuous cycle that allows companies to survive and thrive and business owners to hire. An ordinary middle-class consumer is far more of a job creator than I ever have been or ever will be.

How does this dynamic interaction show up in the macroeconomy?  Economist Alan Krueger, currently serving as Chair of the President’s Council of Economic Advisers summarized these findings in a recent speech, in a section on the consequences of economic inequality.

Putting some of these themes together, I have hypothesized that there are causal linkages between inequality and immobility.  To the extent that those who have lost income share in recent years suffer diminished access to the goods, services, and general living conditions that would enhance their mobility, we would expect to see economic results like those cited above.

Here, I’m thinking about everything from access to quality education, starting with pre-school (such early educational interventions have been shown to have lasting positive impacts), to public services, like decent libraries and parks, to health care, housing, and even the physical environment.  The new research linking mobility and inequality may well find that as society grows ever more unequal, those falling behind are losing access to the ladders that used to help them climb over the mobility barriers they faced.

It is widely maintained by some policy makers that it is up to the private sector to provide the middle class with the opportunities they need to get ahead.  Given that most economic activity and jobs are not directly associated with government, this is of course true.  But the idea that this implies no role for government is both wrong and dangerous, in the sense of ceding the playing field to our competitors who are not bound by such firm ideology.  This insight is particularly germane given the trends presented above regarding job and income growth, inequality, and mobility.

In fact, government must enforce fair rules of the road, whether it comes to the selling of financial products or the rights of workers to collectively bargain with their employers.  There is a role for government to ensure that basic needs, such as access to affordable health care and a secure retirement, are most efficiently met.  Government must also offset market failures, including recessions, insufficient supply of skills in the workforce, and barriers to entry for potentially expanding industries.  Finally, the system of funding government must be fair in the sense that middle class families do not face a proportionally larger tax federal tax burden—higher effective tax rates—than those with many more financial resources.

Every one of these policy areas provides policy makers like the members of this committee with the opportunity to help reconnect growth and middle class prosperity, restore some degree of income security, and push back on the inequality and immobility trends documented above.

The massive market failure of the great recession provides important lessons to policy makers, both regarding the lack of financial oversight that helped to inflate the housing bubble and the stimulus measures, most notably the Recovery Act, that helped to generate the historically large swings from negatives to positives in growth and jobs as shown in the first table above.

But more such measures are needed.  While the economy is improving and unemployment is slowly coming down, at current growth rates, it will take many years to reach full employment.  The following measures can help build on the momentum we have and accelerate the recovery:

Finally, it is important to note one area of public policy that has incorrectly been singled out in recent years as a factor holding back job growth and hurting the middle class: the regulatory climate.  While onerous regulations should always be rigorously reviewed for proof of their net positive benefits, it is clear from the evidence that it is weak demand, not regulation, that’s preventing faster job creation.

Employers themselves, particularly small businesses, report in various surveys that poor sales (aka, weak demand) has been a much more important constraint then regulations.  Recent analysis by the Treasury Department provides this summary:

This testimony has stressed that, even as the economy is improving and the American people are digging their way out of the Great Recession, unemployment is still high and economic growth still relatively slow.  Compared to the massive losses in early 2009, we’re much improved.  But compared to an economy that’s providing what I believe members of this Committee would recognize as gainful opportunities for middle class workers and their families, we’ve got a ways to go.

Importantly, that view does not suggest that GDP growth alone is sufficient, though it is of course necessary.  As recently as the business cycle of the 2000s, we saw middle-class, working-age households lose ground in terms of their real income, even while productivity growth was relatively strong.  My testimony amplifies a number of policy ideas currently under discussion that I believe will help to reconnect growth and middle class prosperity.

But arguments and evidence above also point to the importance of a strong middle class for growth itself, positing a feedback loop.  Businesses cannot create jobs without customers, and in a climate of high levels of income concentration, the customer base becomes too narrow.  In this regard, I present above a set of arguments connecting higher levels of income inequality with less satisfactory growth outcomes.  Similarly, there is reason to believe that high levels of inequality negatively affect mobility, by both lengthening the distance disadvantaged families have to climb and shortening their ladders.

While more research clearly is needed to get a better handle on these interactions between broadly shared prosperity and better growth and mobility outcomes, the circumstantial evidence is quite strong.  I urge the committee to take the policy steps to re-link the economic prosperity of the American middle class with the productivity and growth they themselves our helping to generate.

PDF
for Appendix
[1] Since income data from the Census is an annual measure, those comparisons use annual data.  These job growth comparisons are from monthly cyclical peaks, as defined by the National Bureau of Economic Research.

[3] Note that the income measure in their research is a broad average (real per-capita GDP growth); given that this measure is itself driven upwards by the growth of inequality, a median measure (insensitive to large accumulations at the top of the scale) would likely be even less correlated to tax changes, if not negatively correlated.

[4] A layoff is an event involving the filing of 50 or more initial UI claims by an employer during a 5-week period, with at least 50 workers separated from a job for more than 30 days.  Separations include job losses from such an event, whether or not the worker claimed UI.