SCHIP Reauthorization: President’s Budget Would Provide Less than Half the Funds that States Need to Maintain SCHIP Enrollment

The President’s fiscal year 2008 budget proposes to reauthorize the State Children’s Health Insurance Program (SCHIP) for five years but provides less than half of the funding needed for states to maintain their existing SCHIP caseloads, let alone to make progress in covering more uninsured low-income children.  Under the President’s budget, we estimate that states would experience a total federal funding shortfall of $7 billion over the next five years.  (In other words, federal SCHIP funds would fall a total of $7 billion short of what will be needed to sustain states’ current programs.)

The SCHIP program, which provides comprehensive health insurance coverage to more than four million children and is financed jointly by the federal government and the states, is in the final year of its original 10-year authorization and must be extended this year.  If SCHIP is reauthorized but funding remains frozen at the current annual funding level of $5.04 billion per year (as is assumed in the OMB and CBO budget baselines), states will not have sufficient federal funding to sustain their programs.  According to CBPP estimates based on the most recent SCHIP data, the total federal funding shortfall will equal as much as $13.4 billion over the next five years under the baseline funding levels.[1]  (The Congressional Research Service estimates the shortfall at $12.1 billion over this period.[2])  The proposals in the President’s budget would close a little less than half of this shortfall.

Unless the shortfalls are closed, states will have to scale back their SCHIP programs by reducing eligibility, capping enrollment, eliminating benefits, increasing beneficiary cost-sharing or cutting payments to providers, unless states are able to come up with sufficient additional state funds to plug the federal funding shortfalls.[3]  In states that cut back their programs, significant numbers of SCHIP beneficiaries would be at risk.

While some details of the Administration’s SCHIP reauthorization proposal have not yet been made public, the President’s budget — along with additional detail provided by Administration officials to Congressional staff — provides sufficient information to estimate the likely effects of the President’s proposals.  Using the Center on Budget and Policy Priorities’ SCHIP financing model, which is based on a financing model originally developed by the Office of the Actuary at the Centers for Medicare and Medicaid Services and is similar to the model used by the Congressional Research Service, we estimate that the President’s SCHIP proposals would have the following effects.

1. States would face a total federal SCHIP funding shortfall estimated at $7 billion over the next five years.  Under the President’s budget, the total federal funding shortfall would be approximately $7 billion over a five-year period (2008-2012).  This is a little more than half of the $13.4 billion total shortfall that states otherwise would incur (i.e., that states would incur under the baseline funding levels).[4]  The shortfall would remain this large because the President’s proposal provides a little more than $6.3 billion in federal SCHIP funds to avert shortfalls among the states, of which only $4.8 billion would represent additional funds above the levels already assumed in the baseline.  (See Figure 1 for a year-by-year comparison between the President’s budget and the budget baseline.)

The other $1.5 billion of the $6.3 billion that the President’s budget would provide to address shortfalls consists of existing SCHIP funds that already are expected to be spent in the future.  The Administration’s proposal to hasten the redistribution of unspent funds — by reducing the period of time for which states may retain SCHIP funds from three years to one — would accelerate the spending of such funds, with more of these funds being spent in fiscal years 2008 and 2009 than would otherwise be the case.  But fewer of these funds then would remain to be used in the latter part of the five-year period.  As discussed below, using these funds to address shortfalls in 2008 and 2009 would help to eliminate or greatly reduce the shortfalls in those years but would increase the number of states that face shortfalls in later years.

2. By 2012, some 46 states would face a total shortfall of $2.9 billion, which is equal to the average annual cost of covering 1.4 million children through SCHIP.   Our analysis indicates that the President’s budget would provide sufficient funding in fiscal year 2008 to avert shortfalls.  In 2009, an estimated 41 states would face shortfalls, but the shortfalls would be relatively small, totaling $331million.  (See Figures 1 and 2.)  The 2009 shortfall is equivalent to the cost of covering 196,000 children; see Figure 3 for a year-by-year comparison of the number of children potentially at-risk.)  In the years after 2009, however, the shortfalls would become progressively larger, and the number of SCHIP beneficiaries at risk of losing their health insurance coverage would rise.[5]  Indeed, under the President’s proposals, the number of states experiencing shortfalls in these years would exceed the number of states that would face shortfalls under the budget baseline (although the total size of the shortfalls would not be as large; see Figures 1 and 2). 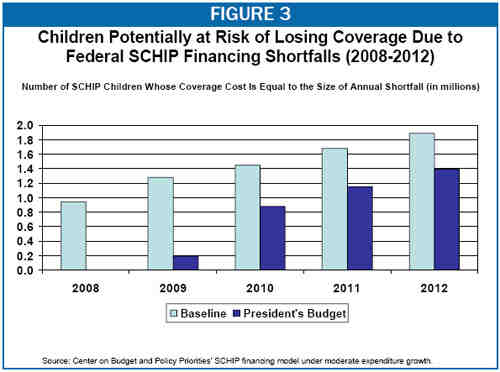 Under the baseline, 36 states are estimated to have insufficient federal funding in 2012 to maintain their existing SCHIP programs.  Under the President’s budget, the number of states facing shortfalls in 2012 would increase to 46.  This would occur because the provision accelerating the redistribution of unspent SCHIP funds would shift to states facing shortfalls in 2008 and 2009 funds that otherwise would be spent by other states in subsequent years.  The states that would give up these unspent funds would have fewer SCHIP funds at their disposal and be more likely eventually to face shortfalls.  (See Figure 2.)

3. Shortfall states whose SCHIP programs cover children in families with incomes above $34,000 for a family of three (200 percent of the poverty line) and/or parents of low-income children would encounter new fiscal incentives to scale back coverage for these populations.  Currently, at least 16 states cover children with family incomes above 200 percent of the poverty line, which is about $34,000 for a family of three in 2007.[6]  Eleven states also use some SCHIP funding to cover some parents of low-income children enrolled in Medicaid and SCHIP.[7]

On March 9, the Congressional Budget Office issued its own detailed estimates of the Administration’s SCHIP proposal. The CBO estimates indicate:*

As noted, the President’s budget would leave states with large and growing shortfalls starting in 2009, which would place substantial financial pressures on states to scale back their SCHIP coverage.[8]  In addition, the budget proposes $24.7 billion in cuts to the Medicaid program, the bulk of which would be achieved by shifting a larger share of Medicaid costs from the federal government to the states.  That would place added fiscal pressures on the states.[9]

As a result of the proposed reduction in the federal matching rates for these populations, SCHIP children over 200 percent of the poverty line and low-income working parents would be at particular risk of losing coverage.  Indeed, such a result is explicitly intended under the President’s budget, in order to “refocus” SCHIP on children in families below 200 percent of the poverty line.[10]  To continue to cover these populations, states would have to increase state funding enough both to offset the overall federal funding shortfalls they still would face and to offset the reduction in the federal matching rate for covering these children and parents.

Furthermore, not only would children over 200 percent of the poverty line who lose SCHIP likely end up uninsured, but many children below 200 percent of the poverty line who live in states that currently cover parents could end up uninsured as well.  A large body of research has found that public-program coverage of parents of low-income who are children eligible for Medicaid and SCHIP markedly increases the enrollment of their children in the programs, as well.[11]  States that face funding shortfalls and a lower federal matching rate and respond by scaling back or eliminating SCHIP coverage for parents could see enrollment among children fall as well.

The fiscal incentives for states to scale back coverage for these populations would be even greater if the President’s budget also restricts the availability of its $4.8 billion in new funding and the unspent funds that would be recovered and redistributed.  (The Administration has not yet specified whether its proposal contains these restrictions, although it seems likely its proposal would contain these restrictions in some form.)  If the President’s budget limits the provision of these funds to shortfall states that do not cover such populations, or allows the use of these funds only to plug shortfalls attributable to children with incomes below 200 percent of the poverty line, that would place still greater pressure on states to cease covering these populations.

4. The President’s budget would do nothing to help states cover more uninsured children, since it does not even eliminate the shortfalls that states would experience under their existing programs.  Many health care providers, insurers, low-income advocates, and state governments, as well as a number of members of Congress of both parties, have voiced support for making further significant progress toward the goal of covering all uninsured children, and for utilizing SCHIP reauthorization as a vehicle for that effort.  However, since the President’s budget would provide fewer funds than are needed just to ensure that states can sustain their existing SCHIP programs, no progress in covering more uninsured children would be made.

The President’s budget for SCHIP reauthorization falls short on two counts.  First, while it acknowledges the need for additional SCHIP funding above the levels assumed in the budget baseline, it does not provide sufficient funding for states simply to sustain their existing programs, and it erects fiscal incentives for states to cease providing SCHIP coverage to children with modest incomes and low-income parents.  The likely result of the large federal funding shortfalls that would remain would be fewer individuals covered through SCHIP and more people who are uninsured.

Second, the budget does not encourage states to continue making progress toward covering more uninsured children, despite the growing consensus that SCHIP reauthorization should serve as a vehicle for reaching the several million low-income children who are eligible for Medicaid or SCHIP but remain unenrolled and uninsured.

[3] States could address part of the shortfalls they face by expanding their Medicaid programs to cover some of their current SCHIP beneficiaries.  However, this would require states to bear a significantly higher share of the cost of covering these beneficaries, because the federal Medicaid matching rate is, on average, 13 percentage points lower than the average federal SCHIP matching rate.

[4] Under the low-expenditure growth version of the CBPP SCHIP financing model, we estimate that the President’s budget would leave a remaining shortfall of $5.7 billion over five years.

[5] Under the low-expenditure growth version of the CBPP SCHIP financing model, we estimate that 43 states would face a total shortfall of $2.2 billion in 2012, equal to the cost of covering 1.1 million children.

[8] In calculating the aggregate shortfall that states will experience over the five-year period (2008-2012), we do not take into account the effect of the lower matching rate that the President’s proposal would institute for certain SCHIP beneficiaries.  The lower matching rate would artificially reduce the need for federal SCHIP funds among the states that cover those beneficiaries and hence would reduce the overall shortfall.  We did not include this effect in our estimates of the shortfall because our estimates are intended to reflect the funding gap between how much states will need to sustain their current programs under current rules (including the current rules governing federal matching rates) and how much federal funding states will have available under the President’s proposal.  Taking into account the lower matching rate would reduce our estimate of the size of the five-year shortfall from $7.0 billion to $5.1 billion.