Cuts Start in 2008 and Grow Deeper Over Time

Under the Administration’s budget, domestic discretionary programs — the programs that are funded each year through the annual appropriations process, other than defense and international programs — are slated for sizable reductions over the next five years.  The budget calls for these cuts to start in 2008, when domestic discretionary programs as a whole would be funded below a freeze of the levels provided for 2007 in the full-year continuing resolution now moving through Congress.[i]  The cuts would then grow deeper each year after 2008, and would come from almost every part of the domestic budget.  The largest cuts would come in 2012, when domestic programs would be cut $34 billion, or 7.6 percent, relative to the 2007 funding level, adjusted for inflation.  (See Figure 1)

Data from back-up information provided by the Office of Management and Budget (OMB) to the Congressional Budget Committees (but not made readily available to the public) show that key domestic priority areas — including areas such as education, environmental protection, veterans health care, and medical research — would be slated for large funding cuts over the 2008 to 2012 period.

Nevertheless, some important information on the Administration’s planned cuts in discretionary programs in the years 2009-2012 is available.  Data are available on the overall funding levels that the President is proposing for each of the next five years for the discretionary programs in each of 15 broad budget categories in the budget, known as “budget functions.”  Data on the overall discretionary funding levels the Administration is proposing also are available for each of the 74 smaller budget categories known as budget “subfunctions.”  These data come from OMB “back-up” documents provided to the Congressional Budget Committees (but not made readily available to the public).

In some cases, the reductions that the President’s new budget calls for would be on top of cuts that have been made in domestic discretionary programs over the past few years.  For example, funding for child care and Head Start has essentially been frozen since about 2002, with no adjustment for inflation.  In certain other areas, such as education initiatives associated with the No Child Left Behind Act and biomedical research, the cuts proposed for the next five years would undo some or all of the increasesmade earlier under this Administration.

By failing to identify how the large domestic discretionary program cuts that the Administration is proposing for years after 2008 would be achieved, the Administration has made it difficult for policymakers and the public to assess some of the trade-offs and priority choices upon which its budget is based.  These priorities become more apparent, however, when the proposed reductions in domestic discretionary programs the budget calls for in 2009-2012 are examined by program area

The Domestic Discretionary Cuts Would be Widespread

Under the budget, discretionary programs in nearly all domestic program “functions” and “subfunctions” — with only a few exceptions, such as the “general science, space, and technology” budget function, one set of veterans programs, and the subfunction containing the Strategic Petroleum Reserve — would be slated for cuts over the next five years.  Figure 2 and Table 1 show the cuts in a number of areas.  The cuts include: 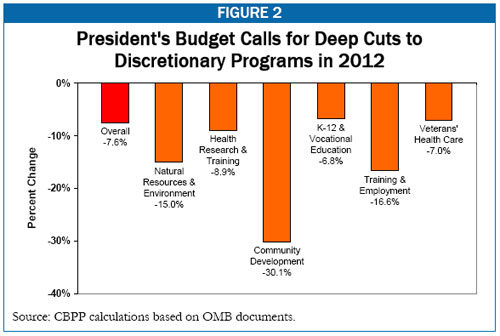 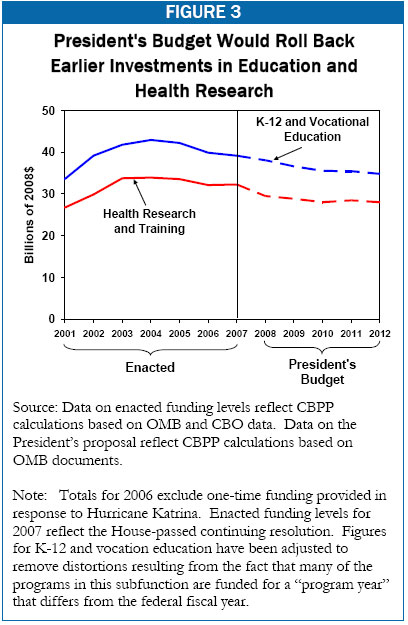 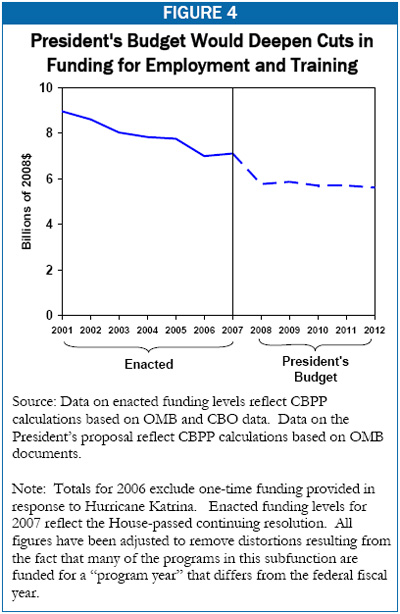 It may be noted that a substantial number of these proposed reductions would represent a cost-shift to states, which would be presented with the choice of cutting services in these or other areas or raising taxes to cope with the funding shortfalls these reductions in federal funding would create.

The President’s budget calls for substantial reductions in a range of domestic discretionary programs.  In many key domestic priority areas — including education, the environment, and state and local law enforcement — funding in fiscal year 2008 would fall below the expected fiscal year 2007 level, adjusted for inflation.

The cuts would then grow deeper in the years after 2008.  The cuts would total $114 billion over five years, and would reach $34 billion in a single year by 2012, relative to the expected fiscal year 2007 funding levels adjusted for inflation.

At the same time that the budget proposes reductions in most domestic discretionary program areas, it proposes to make permanent virtually all of the tax cuts enacted in 2001 and 2003.  The budget’s priorities are clear:  extending virtually every tax cut, including those that benefit the most affluent Americans, takes precedence over maintaining current levels of investment in education, biomedical research, and the environment; and over maintaining current levels of services and benefits in the low-income home energy assistance program upon which many poor seniors depend, in the Head Start and child care programs for low-income children, in programs that assist state and local governments in combating crime, and even in veterans’ health care programs.

The cost of extending the tax cuts would be $317 billion in 2012 alone.[v]  This is several times the amount that would be saved from the entire universe of cuts in domestic discretionary program cuts that the President proposes for that year.  It also is several times larger than the total domestic program reductions the President is seeking on the mandatory and discretionary sides of the budget combined.

[i] Discretionary funding for all programs outside of the Departments of Defense and Homeland Security is currently provided by a temporary continuing resolution, which is scheduled to expire on February 15.  In this analysis, however, the 2007 funding level for domestic programs is taken as the funding provided in H.J. Res 20, passed by the House on January 31.  That legislation, which would supersede the current continuing resolution and provide full-year appropriations for programs outside of the defense and homeland security departments, is being considered by the Senate at this time and is likely to be enacted into law without major changes.  In this analysis, proposed cuts in 2008 and subsequent years are calculated by comparing the proposed funding levels in the budget for those years with the 2007 level in H.J. Res.20, adjusted for inflation.

Note: The administration has said that its budget calls for a one percent increase in funding for domestic programs for 2008, but it derives this percentage figure by comparing its proposed level of funding for domestic discretionary funding in 2008 to an assumed funding level for 2007 that is below the amount provided by H.J. Res 20.  In addition, in comparing its proposed 2008 level to the level assumed for 2007, the Administration does not adjust the 2007 level for inflation.  In actuality, the overall level of funding that the administration is proposing for domestic discretionary programs in 2008 is $1.5 billion below the level for 2007 reflected in H.J. Res. 20 even before inflation is taken into account, and $12.9 billion below that level after adjustment for inflation.

[ii] In the past, the back-up tables to the budget that were provided by this and previous administrations included proposed funding levels for each budget account for each year that the budget covered.  Budget accounts often consist of a single program but sometimes include multiple, related programs.

[iv] For more information on the impact of the funding& 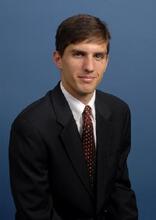