Proponents of the 2001 and 2003 tax cuts often argue that the economic and employment growth of the past several years establishes that these tax cuts “worked” and had strong beneficial effects.  More recently, some have also argued that, with growth slowing, new tax cuts are needed and would reinvigorate the economy.

It now appears likely that the economic expansion that began in 2001 drew to a close in 2007.  Whether or not it is ever formally declared a recession, the period since the third quarter of 2007 has seen sub-par growth (including a negative fourth quarter in 2007), shrinking payroll employment, and a rising unemployment rate, and so looks more like an economic slump than an economic expansion.  Now is therefore a good time to take stock of the 2001-2007 economic expansion as a whole.  We examine the expansion from 2001, when it began, through the third quarter of 2007, before the recent slow-down in economic growth.

The evidence on the 2001-2007 expansion provides no support for the claim that the tax cuts generated especially robust economic growth.  Rather, examination of a broad range of key economic indicators indicates that the economic expansion that began in 2001 was, on balance, weaker than average.  In fact, with respect to GDP, consumption, investment, wage and salary, and employment growth, the 2001-2007 expansion was either the weakest or among the weakest since World War II.

Moreover, the economy’s performance between 2001 and 2007 was weaker, overall, than its performance in the equivalent years of the 1990s, years following significant tax increases.  GDP growth was somewhat weaker than in the 1990s, and job creation, investment, and wage and salary growth all were substantially weaker.

What the Data Show:  The Key Findings

We examine Commerce Department, Labor Department, and Federal Reserve Board data on seven economic indicators:  the gross domestic product, personal consumption expenditures, private domestic fixed non-residential investment, net worth, income from wages and salaries, payroll employment, and corporate profits.  For each indicator, we look at average growth both since the economy hit bottom in November 2001 and since the last business-cycle peak in March 2001.  We compare average growth over these periods with the average growth that occurred over comparable periods in the other business cycles since the end of World War II.[1]  (Growth is measured after adjusting for inflation, except for employment levels, where such an adjustment is inapplicable.) 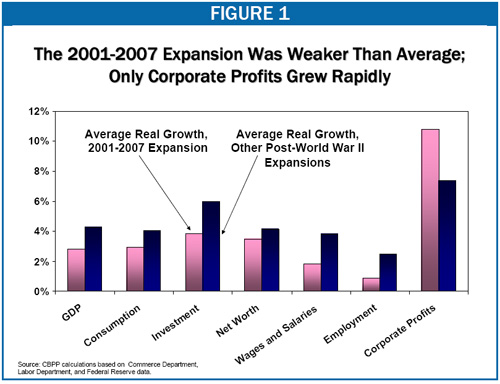 Corporate profits fared exceptionally well.  The sole exception to the 2001-2007 period’s lackluster performance was the growth of corporate profits.  They experienced average annual growth of 10.8 percent, as compared with average growth of 7.4 percent for other comparable post-war periods.

In the previous section of this analysis, we compared the 2001-2007 expansion with earlier expansions by measuring growth rates for various key economic indicators starting from the trough of the business cycle.  Some may argue that this comparison disadvantages the 2001-2007 expansion because it followed a relatively mild recession.  All else being equal, one would expect the economy to recover more robustly after a deep recession than after a shallow one.

To account for the possibility that starting from the trough skews the results, we also examined growth in the same indicators starting from the previous economic peak, which in this case was March 2001.  Using that approach does not change any of our central conclusions.  Measured since the peak, growth still fell short of the post-war average for all indicators except corporate profits (see Table 1), and growth in GDP, investment, wages and salaries, and employment all remained especially weak in comparative terms.

Supporters of the tax cuts generally focus on a different set of statistics:  growth rates measured only from 2003-2007, the strongest portion of the expansion.  Such an approach is misleading.  The fact that growth rates over the expansion as a whole were well below average indicates that the economy never caught up to where it would have been if GDP, consumption, investment, net worth, wages and salaries, and employment had merely grown since the start of the expansion at the average rates for post-war expansions.  Moreover, even since 2003, GDP, consumption, investment, wage and salary, and employment growth have been unexceptional by historical standards.[3]

The Duration of the Expansion

Comparisons to the Economic Cycle of the Early 1990s

Findings from a comparison of the 2001-2007 period with the business cycle of the early 1990s also are of note, since the comparable period of the 1990s expansion followed tax increases.

It is also worth noting that the 1990s expansion continued for four additional years after the period considered here, whereas the 2001-2007 expansion has already given way to a significant slow-down, if not a recession.  Moreover, the economy’s performance during the later part of the 1990s (the part not included in these comparisons) was stronger than in the years of the 1990s expansion that we examine here.

These data suggest that the 2001 and 2003 tax cuts did not lead to a shining economic performance.  Even relative to the 1990s, when taxes were increased significantly during the early stages of the expansion, the economy’s performance after these tax cuts was disappointing.

But while the tax cuts do not appear to have delivered especially good outcomes for the economy, they have contributed to a sharp deterioration in the fiscal outlook.  Since the last economic peak, the budget has swung from surplus to deficit, with the tax cuts accounting for about half of the swing.  The cost of the tax cuts in fiscal year 2007 was greater than the entire fiscal year 2007 budget deficit.

If the tax cuts are extended and their cost continues to be deficit-financed, they are more likely to harm the economy over the long run than to help it.  A number of studies by highly respected institutions and economists have found that, if major tax cuts are deficit-financed, the negative effects of higher long-term deficits are likely to cancel out or outweigh any positive economic effects that might otherwise result from the tax cuts.[4]  For instance, a comprehensive study of the 2001 and 2003 tax cuts by Brookings Institution economist William Gale and then-Brookings Institution economist (now CBO director) Peter Orszag found that making the tax cuts permanent without offsetting their cost would be “likely to reduce, not increase, national income in the long term.”[5]  The bottom line is that large deficit-financed tax cuts are more likely to reduce investment and economic growth than to increase them.

[1] We take comparable periods to be periods of equal length as measured from the trough or peak of the business cycle, as identified by the National Bureau of Economic Research (the arbiter of the starting and ending points of business cycles).

[2] We examine fixed non-residential investment, as opposed to total gross domestic investment, in order to ensure that we capture growth of the productive capital stock that might be targeted by the tax cuts rather than growth of inventories or housing construction.  If tax cuts are good for long-term growth because they induce investment, as proponents argue, then the type of investment that should have increased is investment in business plant and equipment.  (Note that the growth in gross investment also has been below average in this expansion, averaging 3.7 percent annually during the current expansion, as compared with a post-war average of 8.0 percent.)

[3] For further discussion of the economy’s performance since 2003, see Aviva Aron-Dine, “The Effects of the Capital Gains and Dividend Tax Cuts on the Economy and Revenues:  Four Years Later, a Look at the Evidence,” Center on Budget and Policy Priorities, revised July 12, 2007.