Four Years Later, a Look at the Evidence

With the fourth anniversary of the 2003 capital gains and dividend tax cuts just past and the Office of Management and Budget’s Mid-Session Review released today, supporters of making these tax cuts permanent are reiterating their claim that the tax cuts boosted the economy and increased federal revenues.  For example, a release from the Senate Republican Policy Committee contends that the tax cuts “contributed to today’s strong pro-growth economy” and “have also led to a surge in tax receipts” and that allowing these tax cuts to expire as scheduled would “have devastating consequences for the economy.”[1]

The last four years of data, as well as some important new academic research, suggest that the answer to each of these questions is No.

Since supporters of the capital gains and dividend tax cuts routinely appeal to the economic and revenue growth of the past few years as evidence of these tax cuts’ success, one might assume that the recent economic performance has been stronger than typical.  In fact, the opposite is the case.

Advocates of the 2003 tax cuts frequently emphasize that the economy’s performance improved around the time that these tax cuts were enacted, and they imply that the tax cuts caused the improvement in the economy.  But as nine out of ten prominent economists told the New York Times in a recent informal survey, the economy’s improvement was most likely attributable to factors other than the tax cuts.[3]

Claims that the revenue growth (as distinguished from the economic growth) that has occurred since 2003 was due to the tax cuts are even less believable.  In large part, stronger revenue growth after 2003 resulted from the stronger economy.  But since, as discussed above, the tax cuts were not responsible for the improvement in the economy, they could not have been responsible for the portion of the revenue increase due to stronger economic growth.

Apart from the stronger economy, several other factors also have helped increase revenues since 2003.  But these factors appear to have been independent of the capital gains and dividend tax cuts, and in some cases they reflect developments for which supporters of these tax cuts are unlikely to want to claim credit.

Making Tax Cuts Permanent Would Likely Have Negligible Economic Impact, But Would Cost About $30 Billion A Year

While most of the debate among policymakers and journalists has focused on whether the capital gains and dividend tax cuts boosted the economy in the short run, the more credible argument for these tax cuts has always been that they might boost long-run growth by inducing Americans to increase personal saving or investment at the expense of consumption or by making the allocation of investment more efficient.  The evidence on these arguments remains inconclusive, however, and early studies of the 2003 tax cut raise fresh doubts about such claims.  In addition, the tax cuts thus far enacted — and most proposals to extend them — rely on deficit financing, which has negative long-term economic effects potentially large enough to outweigh any economic gains from the tax cuts. 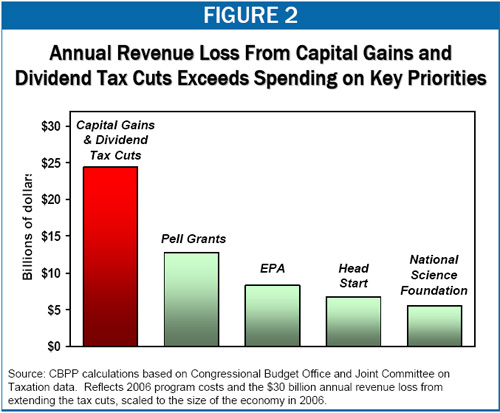 Click here to read the full-text PDF of this report (16pp.)

[2] Specifically, GDP growth in the 1990s recovery was slightly stronger than in the current recovery, while growth in investment, wages and salaries, and employment was substantially stronger.  For more detailed comparisons, see Aviva Aron-Dine, Chad Stone, and Richard Kogan, “How Robust Is the Current Economic Expansion?” Center on Budget and Policy Priorities, revised June 28, 2007, http://www.cbpp.org/8-9-05bud.htm.