The House Ways and Means Committee plans to pass legislation this week that would make a significant change in the premium tax credit that helps families afford health insurance — causing 220,000 to 250,000 people to forgo coverage and remain uninsured, according to the Joint Tax Committee, while increasing financial uncertainty and premium costs for millions of others.

The Ways and Means proposal would eliminate these caps, requiring full repayment.  That would cause a myriad of problems.  First, it would punish people of limited means for unanticipated changes in their income and household size, with the harshest impact falling on families with low or modest incomes and people nearing retirement, since these groups receive the largest subsidies.

Consider a married couple in its mid-fifties with one child and $28,125 of income (140 percent of the poverty line in 2015) from one spouse’s earnings.  This family qualifies for a premium tax credit.  In mid-September, the other spouse gets a job that offers health coverage, the family takes the coverage, and its premium tax credit ends.  The family’s income for the year totals $38,170 (190 percent of the poverty line).

Under current law, the family must pay back $600 when it files its taxes — the ceiling on repayments for married filers with incomes below twice the poverty line.  Under the Ways and Means proposal, however, the family would have to pay back about $1,100, even though it did nothing wrong, its income estimate was accurate before the other spouse found a job, and the family promptly notified the marketplace when that occurred and ended its premium subsidy and marketplace coverage.

Second, the proposal could weaken the viability of the health insurance marketplaces, since those who forgo coverage due to the risk of being hit with big repayment obligations would disproportionately be people who are healthier than average; sicker people would less likely risk going without insurance.  As a result, the pool of people covered through the marketplaces would become a sicker pool overall, which in turn would push up premiums and could weaken the marketplaces’ ability to function effectively.

How the Repayment Caps Work Now

Under health reform, people who aren’t eligible for Medicaid and lack access to affordable employer-sponsored coverage can get subsidies to help them buy private coverage if their income is between 100 and 400 percent of the poverty line.[1]  The subsidies come in the form of a premium tax credit, based on the taxpayer’s projection of family income and composition for the coming year — as verified by the marketplace — and go directly to the taxpayer’s health insurer.  When people file their tax returns, those with income for the year that turned out to make them eligible for a smaller subsidy than they received (or no subsidy at all) must pay back some or all of what they got — even if they received the correct subsidy based on their income in the months for which they received subsidies.  (This provision differs sharply from how virtually all other means-tested programs work.  Other programs base eligibility on current income; if a household’s income rises during the year, it stops receiving assistance or receives less, but it doesn’t have to pay back what it received during its period of need.)

To provide protection against repayment amounts that could be financially devastating and discourage enrollment, policymakers set a family’s maximum repayment at $400 when they passed the Affordable Care Act (ACA).  Since the ACA’s enactment, however, policymakers have twice substantially raised the amounts that households can be required to repay.  The current caps range from $300 to $2,500, depending on the taxpayer’s income and tax filing status (see Table 1), boosting the amounts that families can be required to repay by more than six times over what health reform required.  The Joint Tax Committee estimated that, when enacted, those changes would cause several hundred thousand people to forgo coverage.[2]

Eliminating the repayment caps altogether, as the Ways and Means proposal would do, would place taxpayers who experience income or household changes that they couldn’t foresee at risk of having to pay back all of the credits they received.  That would leave families that estimated their income honestly, played by the rules, and did nothing wrong vulnerable to thousands of dollars in repayment obligations.  The threat of repayment could cause many families to forgo coverage and undo some of the health and financial security that health reform was intended to provide.

People who seek advance premium tax credits to help them afford health coverage must provide information on their projected income and household size so that the marketplaces can determine their eligibility for subsidies and, if they’re eligible, how large the subsidies should be.  The income that applicants report is matched with IRS information and data from a credit reporting agency.  When electronic data on income aren’t available or the applicant’s attestation of income isn’t “reasonably compatible” with electronic data — which generally means the applicant has listed income more than 10 percent lower than what the electronic data show — applicants can receive financial assistance based on the income information they provided on the application for only a temporary period, during which they must take further steps to verify their income.  They have 90 days to provide documents verifying their income.  If they don’t do so to the marketplace’s satisfaction, their premium tax credit is adjusted or ended.

Many changes in income and household size that can alter a family’s premium tax credit are hard to predict with certainty.  That can be true, for example, for the self-employed, for those who often work overtime, or for those who receive lump-sum income.  For example, a low-income individual who receives a lump-sum death benefit upon the death of a close family member could face a large repayment obligation if the repayment caps are eliminated.

A change in the taxpayer’s household composition also can affect its premium tax credit.  The credit is determined by household income as a percentage of the poverty line, which measures income in relation to family size.  As with income, a taxpayer’s family size (in this case, the number of personal and dependency exemptions claimed on the tax return) isn’t determined until the end of the tax year.  If a taxpayer expected to claim an individual as a dependent but, in the end, couldn’t do so (because, for example, the individual moved out of the household during the year or because of such other factors as age, income, or student status), the taxpayer’s income will rise as a percentage of the poverty line — and the taxpayer’s subsidy will fall, even though the family’s income hasn’t changed.

In addition, some changes in family composition can make a person ineligible for the subsidy altogether, such as when a person separates from a spouse and doesn’t file a joint tax return.  Under the Ways and Means proposal, couples who separate during the year and file their taxes separately could be forced to pay back their entire premium subsidy, even if the subsidy was based on an accurate estimate of their income in the months before they separated and they reported (and the marketplace acted on) their change in circumstances as soon as it occurred.

People who receive advance premium tax credits must report changes in their income and household composition throughout the year.  Yet prompt reporting often can’t avoid an “overpayment.”  Consider a couple in its late fifties, with one spouse unable to work, that projects earnings of $19,000 per year (119 percent of the poverty line), making the couple eligible for $13,468 in advance premium tax credit payments (in a state that hasn’t expanded Medicaid).  In November, a disability claim for the non-working spouse is resolved retroactive to 2012, and the disabled spouse receives a lump-sum payment of $37,000.  Instead of $19,000, the couple’s income for the year totals $56,000 (352 percent of the poverty line).  The couple immediately reports the additional income to the marketplace, triggering a redetermination of its eligibility.  Under current law, the couple would face a $2,500 repayment at tax time.  But under the Ways and Means proposal, it would owe $3,900 — $1,400 over today’s caps — despite timely and accurate reporting at every stage.

Low-Income Families and Older People Would Be Most at Risk

Premium tax credits are based on the difference between the cost of a benchmark insurance plan (technically, the second lowest cost “silver plan” in the marketplace) and what a household is expected to contribute based on its income.  Thus, the credit is highest for people with the lowest incomes and those who are older, because insurers can charge premiums up to three times higher for an older adult than for someone younger.  A large share of marketplace enrollees are low-income or older, and they would face a substantial risk of facing very big repayments if the caps were eliminated.  Recently released data on 2016 enrollment show that 66 percent of people enrolling in the federal marketplace have incomes below 200 percent of the poverty line.  In addition, 26 percent of enrollees in the state and federal marketplaces are between ages 55 and 64, and another 21 percent are between 45 and 54.[3]

The Proposal Would Weaken the Marketplaces’ Viability

If the repayment caps are eliminated, the estimated 220,000 to 250,000 people who forgo health coverage would disproportionately be healthy individuals.  As a result, the pool of people enrolled through the marketplaces would become sicker, on average, pushing up everyone’s premiums.  The higher premiums, in turn, would lead additional healthy people to forgo coverage.  The result would be “adverse selection” that raised premiums still further and could ultimately weaken the marketplaces’ viability, as more of the healthier people drop out and premiums consequently keep rising for everyone else.

The repayment caps are designed to strike a balance between making coverage affordable based on people’s current circumstances and providing them with a tax credit based on the income they report on their tax returns.  Scrapping them — and requiring very large repayments at tax time from people who accurately reported their circumstances but subsequently gained a job, had a child leave home, or experienced another such change (and dutifully reported it) — would not represent sound policy.  Eliminating the caps would force families to weigh two risks against one another — being uninsured against serious illness or injury, versus owing the government thousands of dollars due to unavoidable changes in circumstances that they couldn’t foresee.

[1] Lawfully residing immigrants who are not eligible for Medicaid based on their immigration status can receive premium tax credits if their incomes are below the poverty line and they meet other eligibility requirements for the premium tax credits. 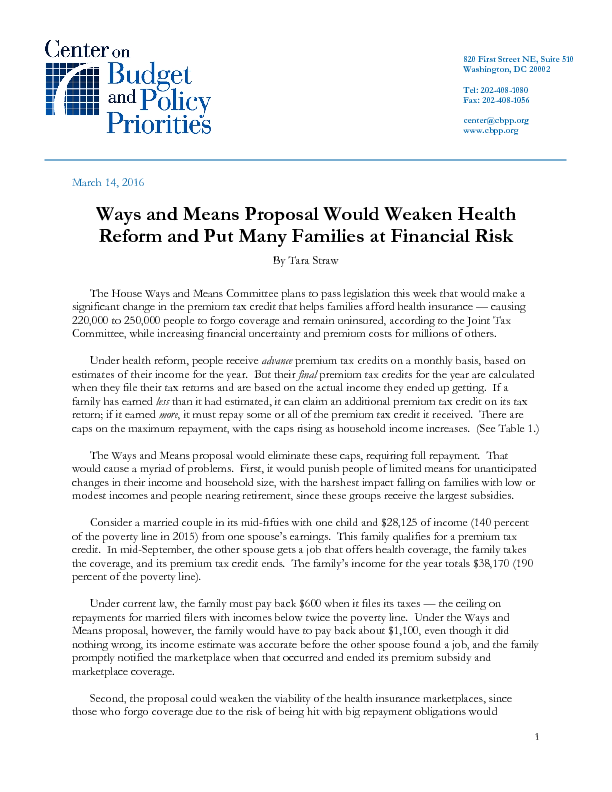