Despite House Republican leaders’ declarations that they were moving on from health care after pulling their Affordable Care Act (ACA) repeal bill from the floor on March 24, they have suggested over the past few days that they may instead make another attempt to pass the American Health Care Act (AHCA), either this week or in May.[1] Speaker Paul Ryan explained that Congress needs to act soon, because individual market insurers are already making decisions about plan offerings and premiums for 2018.[2]

The Disruptive Effects of the AHCA

The AHCA would significantly disrupt the individual market for health insurance in the near term, according to Congressional Budget Office (CBO) estimates, primarily because it would immediately repeal the ACA’s individual mandate. Without the mandate, fewer younger and healthier people would enroll in coverage. That would increase premiums by 15 to 20 percent compared to current law in 2018, adding an average of about $900 to $1,200 to annual (pre-tax credit) HealthCare.gov premiums.[4] Repeal of the individual mandate, along with the resulting premium increases, would also reduce enrollment, shrinking the individual market by 23 percent in 2018, according to CBO’s estimates. (See Figure 1.)

The AHCA would affect the individual market more drastically starting in 2020, when its changes to the ACA’s premium tax credits would take effect. Compared to the ACA, the AHCA would offer current marketplace consumers an average of $2,200 less help paying for premiums, and it would increase their total out-of-pocket costs (premiums, deductibles, coinsurance, and copays) by an average of $3,600.[5] Largely as a result, CBO projects that the AHCA would shrink nationwide individual market enrollment by one-third compared to current law in 2020. Individual market enrollment would partially recover over time, primarily because the AHCA would also create incentives for some employers to stop offering health coverage, but enrollment would remain lower than under current law.

The AHCA’s impact would also vary significantly across the country. Where tax credits that help consumers pay premiums would be cut by $2,200 for current HealthCare.gov marketplace consumers nationwide, they would be cut by an average of $3,500 or more in Alaska, North Carolina, Oklahoma, Alabama, Nebraska, Wyoming, West Virginia, Tennessee, and Arizona.[6] In these states, individual market enrollment would likely drop by much more than one-third.

The Disruptive Effects of Uncertainty

As long as the Administration and congressional leaders hold out the possibility of passing the AHCA in some form, insurers making decisions about 2018 cannot know for sure which individual market to price and prepare for: the larger, lower-cost market they would face under current law, or the smaller market and sicker risk pool they would face under the AHCA. Consequences of that uncertainty include:

Deadlines for insurers to make decisions about 2018 participation are approaching quickly. Qualified Health Plan applications are due to the Centers for Medicare & Medicaid Services (CMS) on June 21. But many states set their own plan or rate filing deadlines well before then; for example, Connecticut, Nevada, Ohio, Oregon, Pennsylvania, and Virginia all have filing deadlines in May.[8]

With insurers already well down the path of preparing for 2018, the uncertainty created by congressional Republicans’ efforts to repeal the ACA has likely already done significant damage.  Moreover, insurers are also anxious about whether the Trump Administration plans to administer the ACA marketplaces to promote stability or to try to make them “explode.” Already, the Trump Administration has cut back on outreach activities, sent mixed signals about enforcing the individual mandate, and issued an executive order widely interpreted as a directive to federal agencies to start dismantling the ACA.[9] Uncertainty about the Administration’s future plans for cost-sharing reduction reimbursements, individual mandate enforcement, and CMS outreach activities is adding to upward pressure on rates and could discourage insurers from offering individual market policies for 2018.[10]

But while the responsibility for alleviating uncertainty about the operation of the ACA marketplaces lies mostly with the Administration, congressional leaders could take one easy step in coming weeks to help shore up the individual market in their states and around the country. All they would have to do is reiterate Speaker Ryan’s initial statement after the failure of the AHCA: the ACA is the law of the land, and it will remain so for the foreseeable future.[11]

[4] The CBO estimate takes into account both repeal of the individual mandate and the AHCA’s other near-term changes, including its Patient and State Stability Fund Grants. Congressional Budget Office, “American Health Care Act,” March 13, 2017, https://www.cbo.gov/system/files/115th-congress-2017-2018/costestimate/americanhealthcareact.pdf. To convert the 15 to 20 percent increase into a dollar figure, we project current law average premiums for 2018 based on actual average premiums for 2017 (available from Centers for Medicare & Medicaid Services, “Health Insurance Marketplaces 2017 Open Enrollment Period Final Enrollment Report,” March 15, 2017, https://www.cms.gov/Newsroom/MediaReleaseDatabase/Fact-sheets/2017-Fact-Sheet-items/2017-03-15.html) and growth projections from the Centers for Medicare & Medicaid Services Office of the Actuary.

[5] Aviva Aron-Dine and Tara Straw, “House GOP Health Bill Still Cuts Tax Credits, Raises Costs by Thousands of Dollars for Millions of People,” Center on Budget and Policy Priorities, March 22, 2017, http://www.cbpp.org/research/health/house-gop-health-bill-still-cuts-tax-credits-raises-costs-by-thousands-of-dollars. These estimates are for the 39 states that use the HealthCare.gov eligibility and enrollment platform.

[7] Insurers who completely exit a state’s individual market are generally barred from participation for the next five years. But insurers can avoid that outcome by offering a token plan in which they enroll few or no customers.

[8] According to state Division of Insurance documents, individual market rate filings are due May 1 in Connecticut (http://ct.gov/cid/lib/cid/BulletinHC-90-17.pdf) and Oregon (http://dfr.oregon.gov/business/insurance-industry/health-ins-regulation/Documents/2018-filing-timelines.pdf), May 3 in Virginia (https://www.scc.virginia.gov/SCC-INTERNET/boi/co/acafilinginfo/files/deadline.pdf), May 17 in Nevada (http://doi.nv.gov/uploadedFiles/doinvgov/_public-documents/Insurers/Filing_Information/NV%20Rate%20Filing%20Timeline%20-%20Draft%20v%202.0.pdf ), May 22 in Pennsylvania (http://www.insurance.pa.gov/Companies/ProductAndRateRequire/Documents/2018%20ACA%20Compliant%20Health%20Insurance%20Rate%20Filing%20Guidance%20Final.pdf), and May 26 in Ohio (http://www.insurance.ohio.gov/Company/Documents/ACA%20Filing%20Resources/ODI_Training_2018PY_20170307.pdf).

[11] Ryan’s full statement was, “Yeah, I don’t know what else to say other than Obamacare’s the law of the land. It’s gonna remain the law of the land until it’s replaced. We did not have quite the votes to replace this law. And so, yeah, we’re gonna be living with Obamacare for the foreseeable future.” http://time.com/4713114/paul-ryan-ahca-health-care-failure-transcript/ 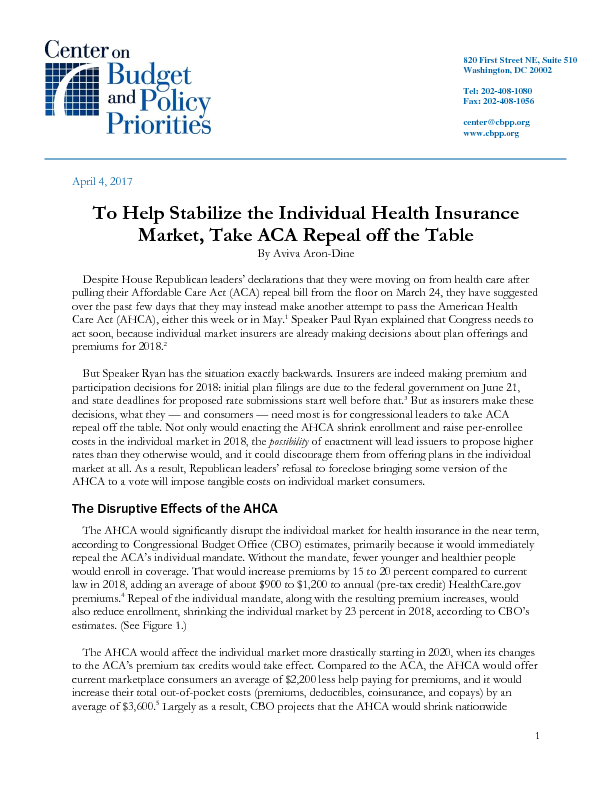