Taking Away Medicaid for Not Meeting Work Requirements Harms Veterans

Now, the Trump Administration is allowing states to take Medicaid coverage away from people who don’t document that they are working or participating in work-related activities for a specified number of hours each month. These policies will harm veterans — a particularly vulnerable group, as many have disabilities or complex health needs, such as multiple chronic conditions, severe mental illness, or substance use disorders that are barriers to stable employment and that make it hard to document compliance with the new rules. A work requirement would also make maintaining coverage harder for people experiencing homelessness, a group that disproportionately includes veterans. People experiencing homelessness face significant employment barriers, including physical and behavioral health conditions, lack of work experience or inconsistent work history, and histories of incarceration.

The Administration is allowing states to impose work requirements on adult Medicaid enrollees other than those who are 65 or older, pregnant, or qualify for Medicaid because they receive disability benefits through Supplemental Security Income (SSI). Most of these state policies require enrollees to document that they work or engage in other work activities (e.g., job training or volunteer work) for at least 80 hours per month, unless they prove that they qualify for limited exemptions. In Arkansas, the first state to implement such a policy, over 18,000 Medicaid beneficiaries lost coverage in 2018 due to the new requirements. While a federal court halted Arkansas’ policy, the Administration is continuing to approve similar policies in other states.

There are more than 9 million non-elderly veterans in the United States and, like the rest of the population, the majority (62 percent) have private health coverage. Those who don’t have private coverage get their coverage through TRICARE (10 percent), the Department of Veterans Affairs (VA) health care system (9 percent), and Medicaid (9 percent). About 6 percent of veterans are uninsured.

Most, but not all, veterans are eligible for VA coverage. Eligibility for VA coverage is based on a number of factors, such as veteran status, the nature of discharge from service, length of service, service-related disabilities, income, and the VA’s financial resources. In addition, some veterans don’t enroll in VA health care even if they qualify, while others live too far away from a VA facility to access services.

Medicaid thus plays a critical role in filling the coverage gaps for low-income veterans. Of veterans with Medicaid coverage, 39 percent rely on Medicaid as their only source of coverage, while the other 61 percent use it to supplement their private coverage, Medicare, or coverage they have through the military, according to the Kaiser Family Foundation.

The uninsured rate among non-elderly veterans fell from 9.6 percent in 2013 to 5.9 percent in 2015 as the ACA’s major coverage provisions took effect, according to an Urban Institute analysis. The gains were greater in states that expanded Medicaid: the share of veterans without health insurance fell by 4.3 percentage points in expansion states, but by 3.3 percentage points in non-expansion states. Nine of the ten states that saw the greatest gains in health coverage were states that expanded Medicaid.

Veterans at Risk of Losing Coverage

Veterans with Medicaid coverage often have complex health needs: 42 percent have two or more chronic health conditions, 54 percent have a disability, 11 percent have severe mental illness, and 12 percent have a substance use disorder. (See figure.) The Trump Administration’s policy does not apply to people who qualify for Medicaid because they are receiving disability benefits like SSI or Social Security Disability Insurance (SSDI), and it requires states to exempt people if they are “medically frail.” But many Medicaid enrollees with a disability or a serious illness would still be subject to the new requirements because many don’t receive SSI or SSDI. And the definition of “medically frail” is narrow and will leave out many veterans, including many with mental health conditions. Many vulnerable veterans will also likely have trouble proving they qualify for an exemption due to bureaucratic obstacles like increased paperwork, which will be harder for them to navigate due to the nature of their condition.

Veterans are more likely to experience homelessness than the rest of the population. And veterans experiencing homelessness are more likely to have some type of disability: 53 percent do, compared to 28 percent of all veterans. While some states include limited exemptions for people experiencing homelessness, the reality is that a work requirement will create another barrier to stable housing and employment. Medicaid also plays a key role in preventing people from becoming homeless, which often happens because of unforeseen medical expenses. States that expanded Medicaid saw sharp reductions in evictions after expansion took effect, compared to states that did not.

Data from Arkansas, which had the nation’s second-largest gain in veterans’ health coverage after expanding Medicaid but then became the first state to implement a work requirement, confirm that a work requirement leads to large coverage losses. Although three-quarters of Arkansas beneficiaries qualified for an exemption and didn’t have to take action in order to maintain coverage, the vast majority of beneficiaries who did have to take action didn’t claim an exemption or satisfy the reporting requirement. As a result, more than 18,000 Arkansans lost Medicaid coverage when the policy was in effect during the second half of 2018.

Losing health coverage worsens health for all groups; that’s why physician organizations like the American Medical Association, American Academy of Family Physicians, American Academy of Pediatrics, and others oppose Medicaid work requirements. But coverage losses and interruptions in coverage are especially harmful for people with serious health needs, which many veterans have. Loss of access to medications and other treatment can lead to serious deterioration in health, more emergency room visits and hospitalizations, and higher health care costs, research shows. 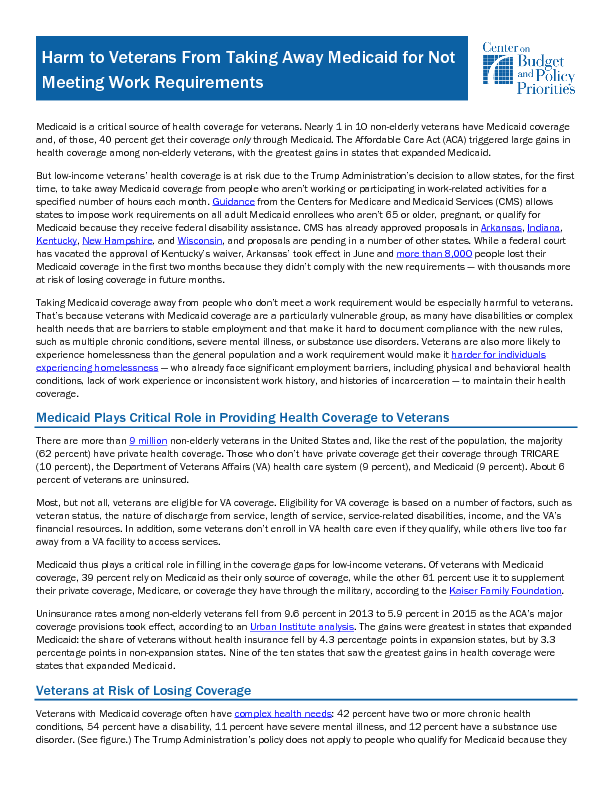