States that have expanded Medicaid under the Affordable Care Act (ACA) to low-income adults have seen large gains in coverage; improvements in access to care, financial security, and health; reductions in uncompensated care costs; and, in many cases, state budget savings. Medicaid expansion also saves lives: over 19,000 from 2014 to 2017, one study found. Yet some states have implemented a “partial” expansion of Medicaid instead of full expansion, and others are considering such an approach.

What Is Partial Medicaid Expansion?

Partial Medicaid expansion refers to expanding Medicaid to cover adults below the poverty line, but not those with incomes between 100 and 138 percent of the poverty line ($12,490 to $17,236 for a single person). Near-poor adults have access to subsidized coverage through the ACA marketplaces, as they do in non-expansion states.

Yes. Supporters of partial expansion argue that near-poor adults wouldn’t lose out under partial expansion because they’d retain access to marketplace coverage. But Medicaid better meets the needs of near-poor adults than marketplace coverage. Medicaid generally doesn’t charge premiums and has lower cost sharing than marketplace plans. It also lets people sign up for coverage anytime during the year, instead of just during a once-per-year open enrollment, a flexibility especially important to low-income people. Low-income people can also find themselves barred from marketplace subsidies if they have an offer of employer coverage, even if it requires them to pay premiums that are nearly 10 percent of their income and provides a plan with a multi-thousand-dollar deductible.

No. Only states implementing full expansion of Medicaid are eligible for an “enhanced” match rate covering at least 90 percent of the cost, compared to regular Medicaid match rates of 50 to 76 percent. CMS guidance says that the enhanced match is only available for full expansion. The Trump Administration reiterated that policy most recently in August 2019 when it declined to approve Utah’s request for the enhanced match for partial expansion, after declining similar requests from Arkansas and Massachusetts in 2018.

States also shouldn’t look to use section 1332 waivers to get enhanced match for partial expansion. Idaho recently tried, requesting to move some near-poor Medicaid expansion enrollees into marketplace coverage. But, as CMS confirmed in a letter to the state, Idaho’s proposal would have failed the section 1332 waiver deficit neutrality guardrail because it would cost the federal government more to cover low-income people through the marketplace than through Medicaid.

How Does Partial Expansion Without Enhanced Match Affect State Budgets?

States with partial expansion at regular match will spend more state dollars to cover fewer people than with full expansion.

For example, Utah policymakers’ decision to repeal a voter-passed initiative calling for full expansion and replace it with partial expansion cut expected coverage gains in half: about 70,000–90,000 people under partial expansion, compared to about 150,000 under full. And those lower coverage gains will actually cost more, because the state will have to pay about 32 percent of the cost of partial expansion under its regular match rate, compared to 10 percent for full expansion. Similarly, Wisconsin, the other state that has implemented a partial Medicaid expansion, has so far spent more than $1 billion more in state funds than it would have if it had fully extended Medicaid coverage to an additional 82,000 people. 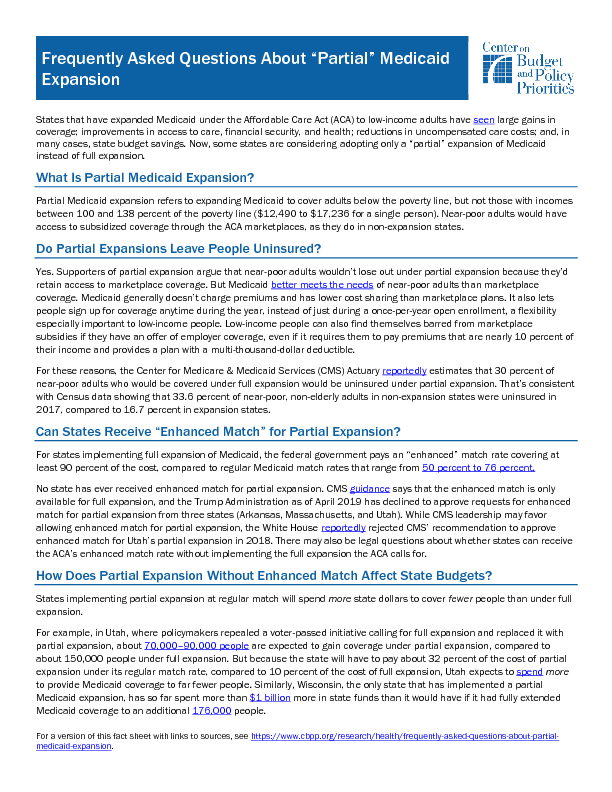