Thanks to the Affordable Care Act (ACA), more than 20 million people have gained health coverage. About half of the increase reflects gains in private coverage, due to ACA policies such as subsidies for individual market coverage, reforms to the individual insurance market, letting young adults stay on their parents’ plans, and the individual mandate requiring most people to have coverage or pay a penalty. (Congress repealed the individual mandate effective in 2019.) The rest comes from increased Medicaid coverage, due primarily to the ACA’s Medicaid expansion to low-income adults but also to ACA policies making it easier for eligible people to enroll in Medicaid.

Growing evidence shows that the coverage gains under the ACA are translating into improvements in access to care (the share of people not accessing care due to cost has fallen), financial security (ACA subsidies have helped avert evictions among low-income adults, for example), and quality of care and health outcomes (adults gaining coverage under Medicaid expansion report better overall health, for example).

In particular, people gaining coverage due to their state’s adoption of Medicaid expansion have seen gains in access to care, financial security, and health outcomes, while states adopting Medicaid expansion have seen reduced uncompensated care costs. For summaries of the extensive research on the impact of Medicaid expansion, see: https://www.kff.org/medicaid/issue-brief/the-effects-of-medicaid-expansion-under-the-aca-updated-findings-from-a-literature-review-march-2018/; https://www.cbpp.org/research/health/chart-book-the-far-reaching-benefits-of-the-affordable-care-acts-medicaid 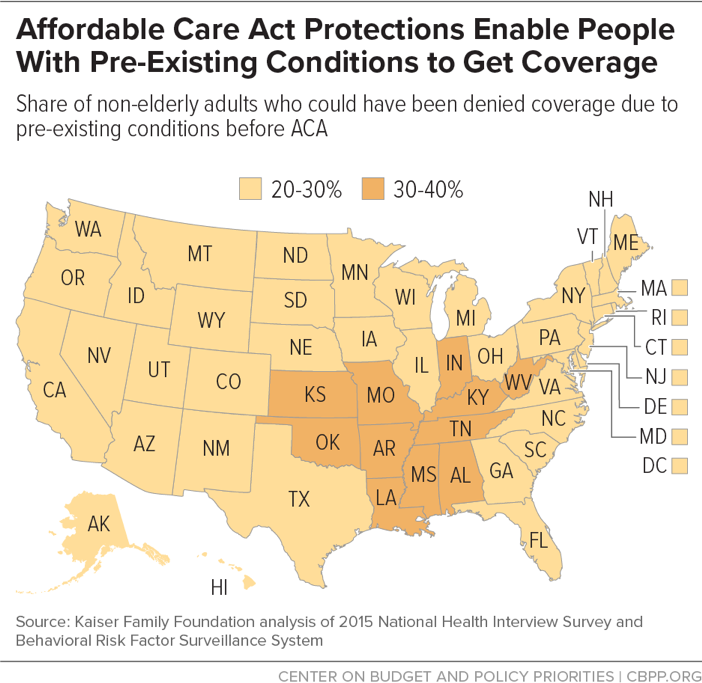 The ACA put in place crucial protections for the more than 50 million non-elderly Americans with pre-existing health conditions. Before the ACA’s major market reforms took effect in 2014, health plans in the individual market could — and did — deny coverage or charge exorbitant premiums based on health status. These practices left many people uninsured or at risk of becoming uninsured if they lost a job. After the ACA’s bans on these practices took effect, the number of people with pre-existing conditions purchasing individual market coverage increased substantially.

In addition to expanding access, the ACA dramatically improved the quality of individual market coverage. The ACA requires all plans to offer “essential health benefits” that are particularly important to people with serious health needs. It also prohibits annual and lifetime limits on coverage, requires plans to cap enrollees’ annual out-of-pocket health costs, and bars insurers from “rescinding” coverage (that is, canceling it retroactively) if an enrollee gets sick and obtains needed care. And it protects women from being charged higher premiums than men and protects older people (who are much more likely to have pre-existing health conditions) from being charged premiums more than three times what younger people pay.

The ACA also improved the quality of coverage for people with employer plans, introducing new protections including: prohibitions on annual and lifetime limits on coverage; requirements that plans cap consumers’ annual out-of-pocket costs; preventive services (such as immunizations, screenings, and contraception) without cost sharing; the option for young adults to stay on their parents’ plans until age 26; and requirements that plans in the large-group market spend at least 85 cents of every dollar they receive in premiums on health benefits.

The ACA individual market is especially important for:

Most marketplace consumers are satisfied with their coverage. Consistent with that, the share who renew their marketplace coverage is high and has risen over time. Marketplace consumers report that ACA subsidies enable them to afford coverage they otherwise couldn’t and that they are largely satisfied with their choice of hospitals and physicians. They also report accessing care at rates similar to people with job-based health plans.

Health care cost growth has been significantly slower since 2010 than in earlier periods. While there are many causes, the ACA played a meaningful role by: reforming Medicare payment rates, which likely led to lower payment rates for private plans as well; establishing incentives for hospitals to avoid unnecessary readmissions and hospital-acquired conditions (such as infections), which are both harmful and costly; and creating mechanisms for ongoing payment reform and experimentation in Medicare. The slowdown in health care costs is generating substantial savings for the federal and state governments.

Premiums for job-based coverage have risen more slowly since the ACA became law, producing sizable savings for workers (though health care costs still put pressure on family budgets). These savings have not been offset by faster growth in deductibles and other out-of-pocket costs; in fact, total out-of-pocket costs (excluding premiums) have grown slightly more slowly since 2010.

Large majorities report they favor key elements of the ACA.