So far, 39 states (including Washington, D.C.) have expanded Medicaid coverage to low-income adults under the Affordable Care Act (ACA).

A growing body of research shows that Medicaid expansion is yielding significant benefits for those gaining coverage, their families, and their communities. This infographic highlights a number of the studies.

The charts below show how Medicaid expansion leads to:

Medicaid expansion has been especially critical for expanding coverage to those with opioid-use disorders. There’s an acute need for treatment for opioid-use disorders and other substance use disorders; a record 63,000 people died of drug overdoses in 2016, with 42,200 due to opioid use. Since Medicaid expansion took effect, the share of opioid-related hospitalizations in which the patient was uninsured has plummeted 79 percent in expansion states, compared to just 5 percent in non-expansion states.

Longstanding racial disparities in health coverage and access to care — the product of factors such as racism, economic and health system inequities, and immigrants’ restricted eligibility for public health coverage — are still significant but have narrowed since the ACA’s major coverage provisions took effect in 2014.

Harvard University researchers periodically surveyed poor adults in Arkansas, Kentucky, and Texas about their access to care and their health. After Arkansas and Kentucky adopted the expansion, adults there were likelier to have a personal physician, receive care for chronic conditions, and receive an annual check-up — improvements not seen in Texas, which hasn’t expanded.

In 2008, Oregon expanded Medicaid to a limited number of low-income adults chosen in a lottery from among those eligible. This approach enabled researchers to compare outcomes for those selected through the lottery to otherwise-similar adults not selected. Researchers found that those enrolled in this limited Medicaid expansion had greater access to health care (including treatment for opioid-use disorders), more regular diagnostic and preventive screenings, and higher-quality care.

More than 555,000 Louisianans have enrolled in expansion coverage since the state adopted the expansion in 2016. These low-income adults are receiving critical mental health services and substance use disorder care, as well as diagnosis and treatment for diabetes, hypertension, and cancer.

The American Academy of Pediatrics recommends that children adhere to a regular schedule of well-child visits with their primary care physician. Researchers find that children, especially low-income children, are more likely to receive an annual well-child visit when their parent is enrolled in Medicaid. Having their own coverage likely helps parents navigate the health care system for both themselves and their children.

Medicaid expansion saved the lives of at least 19,200 adults aged 55 to 64 between 2014 and 2017, a landmark study finds. Conversely, more than 15,600 older adults died prematurely because of state decisions not to expand Medicaid.

The study’s findings are striking but not surprising. A large body of research has already documented how Medicaid expansion is improving access to care and health outcomes in ways that can help prevent premature deaths.

The above-mentioned survey in Arkansas, Kentucky, and Texas found that in the expansion states of Arkansas and Kentucky, the shares of poor adults delaying health care due to cost, using the emergency room as a usual source of care, or having trouble paying medical bills fell relative to the non-expansion state of Texas.

Evictions fell about 20 percent in expansion states compared to non-expansion states after expansion took effect, a new study finds. By improving financial security, Medicaid expansion appears to be helping low-income renters avoid one of the most harmful consequences of financial stress. After eviction, renters often end up in homeless shelters, extremely poor-quality housing, or dangerous neighborhoods, or they must move frequently among homes of family and friends. All of these outcomes can cause long-term harm, especially for children.

Most low-income adults with Medicaid expansion coverage in Ohio and Michigan find that Medicaid makes it easier to look for work and easier to work once they have a job. Health coverage helps low-income adults address health problems such as diabetes or depression, which are a common reason why some people lose their job or cannot find one. These employment benefits are on top of the health benefits that Medicaid expansion enrollees in these states also cited. 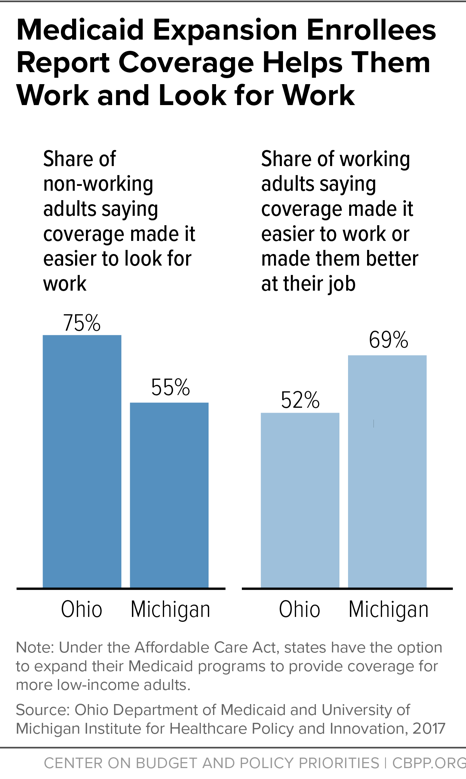 When Uninsured Rate Falls, So Do Uncompensated Care Costs

Note: The Affordable Care Act allows states to expand their Medicaid programs. Each bubble represents a state with the size of the bubble based on state population.

Source: CBPP analysis using MACPAC data on uncompensated care costs and Census Bureau data on uninsured rates by state. Note, each bubble represents a state with the size of the bubble based on state population.

Medicaid expansion states were better positioned to respond to the COVID-19 public health emergency and prevent the resulting economic downturn from worsening access to care, financial security, health outcomes, and health disparities. Unfortunately, the remaining states’ refusal to expand has left hundreds of thousands of essential workers without health coverage. It also has worsened health disparities by race and ethnicity, leaving more Black and Hispanic people and American Indians and Alaska Natives uninsured during a pandemic in which they have seen especially high rates of infections and deaths. By adopting expansion quickly, these states could provide coverage and more financial security to millions of people.

Medicaid is a crucial source of health coverage for workers whose jobs may require them to show up for work during the pandemic regardless of public health restrictions, such as hospital workers, home health aides, food manufacturers, grocery store workers, farm workers, pharmaceutical manufacturer and pharmacy workers, bus drivers and truck drivers, and warehouse workers. 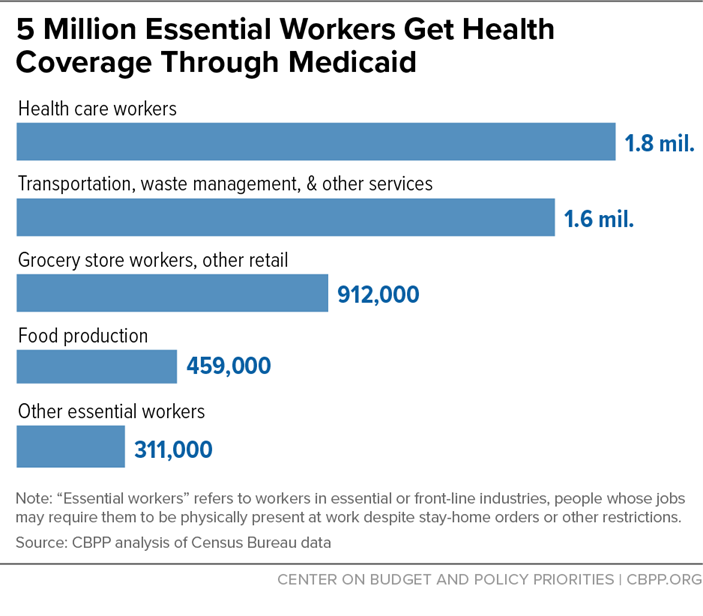 If the remaining states expanded Medicaid, an estimated 650,000 essential or front-line workers who are now uninsured would become eligible for Medicaid. 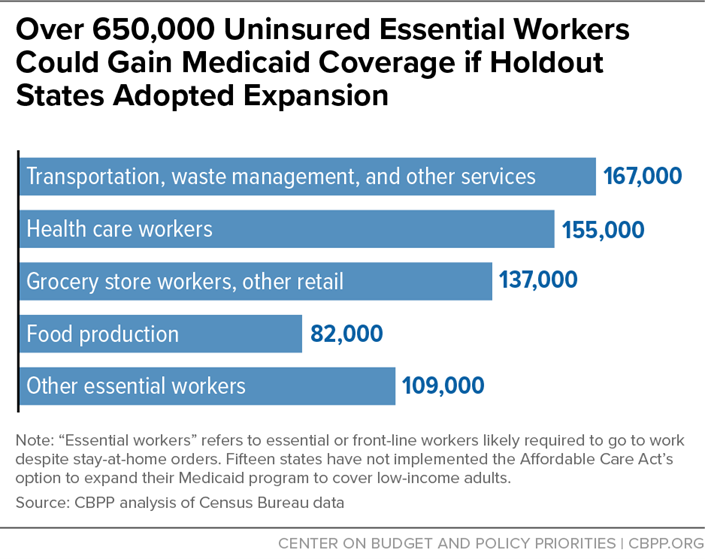 Medicaid expansion also narrows health disparities and could help keep the downturn from widening them.

COVID-19 infection rates and deaths in most states are higher among Black and Hispanic people and American Indians and Alaska Natives, available data show. Overall, Black people are more than twice as likely to die from the disease as most other groups, and death rates for Indigenous people are also particularly high.

Expansion does not eliminate these disparities, which reflect longstanding racial, economic, and health system inequities. But it allows people to access treatment for COVID-19, as well as for underlying health conditions that may worsen its effects.

People of color would see especially large gains if the remaining states expanded: 29 percent of uninsured people who would become eligible for Medicaid are Hispanic and 23 percent are Black, the Kaiser Family Foundation estimates.