Cassidy-Graham’s Dramatic Funding Cliff Not Required by Budget Rules and Would Have Lasting, Negative Impact

The bill’s sponsors have made two claims in defending the 2027 cliff.  First, they have suggested that the cliff is necessary due to the reconciliation budget procedure they are trying to use to enact the legislation.  Second, they have suggested that the cliff is unimportant since it is not their intended result and policymakers will reverse it in a later reauthorization.  The first claim is false, the second highly misleading:

Figure 1 shows the combined effect of these two elements on funding, relative to existing law.  Through 2026, they would cut funding by $418 billion.  Then the cut would balloon to nearly $300 billion in 2027 alone.  This is a larger cut than in the “repeal-without-replace” bill that Congress considered earlier and that CBO said would result in 32 million Americans losing coverage; that’s because Cassidy-Graham not only eliminates funding for the ACA’s health care expansion but also cuts the underlying Medicaid program through its per capita cap.

Cliff Not Required by Reconciliation Procedure

Cassidy-Graham’s sponsors have suggested that the cliff in 2027 is necessary due to the procedural requirements of the budget reconciliation process, which the Senate intends to use to give the legislation fast-track protection.  However, there are in fact no such procedural barriers to providing permanent block-grant funding.  And many other provisions in Cassidy-Graham — including its tax cuts and its per capita cap reducing funding for the underlying Medicaid program — are permanent.

Reconciliation requires that no reconciliation bill add to the deficit after the end of the budget window (in this case, 2026), relative to existing law — or else any senator can raise a point of order against the legislation.  However, while no official CBO score is yet available, the bill’s spending cuts likely are substantially larger than its tax cuts.  Thus, continuing the block grant after 2026 would still result in a bill that reduces the deficit after that point.

The sponsors of the legislation appear to be analogizing to tax cuts like those in 2001, which were enacted via reconciliation and made temporary in part due to the requirement that the bill not increase the deficit relative to existing law.  But those 2001 tax cuts would have added considerably to the deficit outside the budget window (that is, after 2010) if they had continued.  That’s not the case here.  Cassidy-Graham would reduce projected deficits substantially even if the block grant were permanent, and much more so with the block grant expiring.

Less Coverage and Choice, Higher Prices, Lower Quality of Care Even Before 2027

In addition, private insurers that provide coverage in the ACA’s health care exchanges would be less willing to invest resources needed to participate and compete in new exchanges if the long-term viability of those exchanges were in question.

Insurers do not make decisions on a purely year-by-year basis, as business models are often forward looking.  When the ACA was created, some investors formed new insurance companies specifically to sell policies on the exchanges, and already established companies invested resources to compete.  The massive uncertainty due to a default of zero funding for the block grants starting in 2027 would discourage these kinds of investments.

Providers, too, will make decisions in the coming years on investments and hiring that would likely be affected by the uncertainty that the 2027 cliff would create.  Providers would not know how many people would be able to afford health care services in the future, and that would affect the kinds of decisions that affect the quality of care now.

The likely result would be a combination of less coverage, fewer insurers in insurance markets, higher prices from insurers remaining in the markets, and lower quality of care — all before 2027.

Treatment of Funding in Budget Baseline Would Inhibit Funding Extension

Cassidy-Graham’s sponsors have also suggested that policymakers will simply revisit the funding cliff later and reauthorize the block grant.  But even if they do provide more funding, it could be at a much lower level.  The treatment of health care expansion funding in the budget baseline could significantly constrain future funding decisions.

Specifically, the cliff means there are two bad possibilities for how the baseline treats this funding after 2026:  Most likely is that Congress and the Administration assume the block grant is temporary, as the statutory language indicates.  In that case, the baseline would have no further funding after 2026.  Alternatively, they could assume that funding continues in the baseline but is frozen in nominal dollars at the 2026 level.  Any funding extension in either scenario, however, would require further congressional action.

When it comes to expiring spending programs, the official baseline has special rules regarding the treatment of the programs that have sunset dates.  Those rules state that, if an expiring mandatory spending program costs more than $50 million per year (as the Cassidy-Graham block grant would), the budget committees and the Office and Management and Budget (OMB) are to consult and jointly decide on whether to assume that the program is permanent or temporary in the baseline.  Either way, Congress would need to pass a new bill at a later time in order for funding to continue.  But the choice of baseline has a large effect on the estimated costs of the program at the time it is enacted and at the time Congress is trying to continue the program.

If the budget committees and OMB decided that the block grant should be treated as temporary in the baseline (given that it clearly expires as a matter of law), this would have several key implications:

Alternatively, if Congress and the administration treated the block grant as permanent in the baseline despite the expiration, it would be frozen at the 2026 nominal level.  That is because Cassidy-Graham simply provides fixed dollar amounts, and 2026 is the last year of funding.  The effects of a frozen nominal baseline would be similar to a baseline with zero funding, though not as dramatic.  Any additional funding above the frozen 2026 levels needed to keep up with health cost and population growth would appear as a major new cost — even though the ACA coverage expansions that the block grant would replace have been fully paid for in the ACA.

So far, neither Congress nor the Trump Administration has indicated how Cassidy-Graham would be treated in the baseline.  Given that the authors of the legislation made the explicit decision to sunset the funding (as clearly indicated in the bill language), it seems likely that they intend the baseline to follow what the law does: zero out funding after 2026.  If so, extending the funding past 2026 would be scored as costing hundreds of billions per year.

The Cassidy-Graham cliff represents a policy choice by the bill’s drafters that would create substantial uncertainty, discourage states from using the block grant to provide coverage, and weaken health insurance markets and quality of care even before the block grant expires at the end of 2026.  The cliff would also make it very difficult for future policymakers to provide adequate block-grant funding going forward.  In the meantime, the appearance of lower deficits due to the cliff could further the enactment of tax cuts or other Republican legislative priorities.

[1] David Kamin is Professor of Law at New York University School of Law. 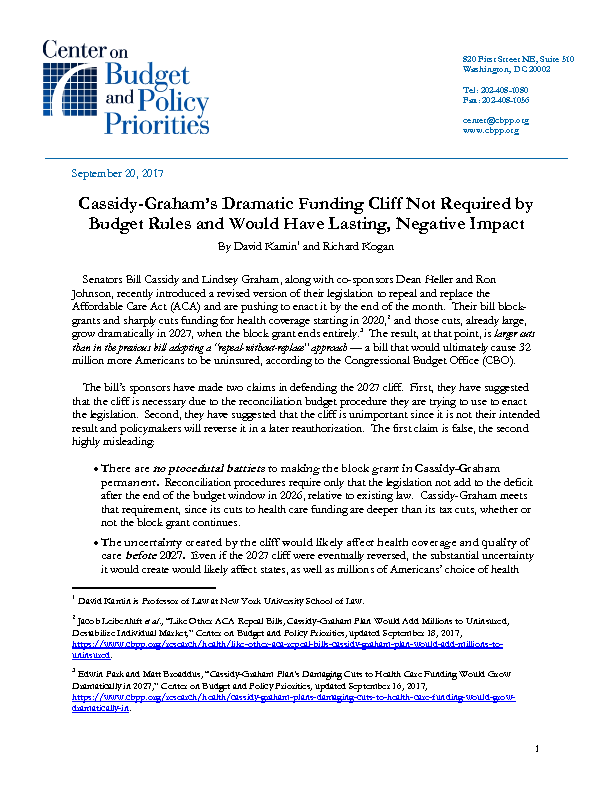