Cassidy-Graham ACA Repeal Bill Would Cause Millions to Lose Coverage

Like the other repeal bills that Congress considered and rejected last year, Cassidy-Graham would eliminate the ACA’s expansion of Medicaid to low-income adults; make individual market coverage unaffordable for many moderate-income consumers; cap and cut federal Medicaid funding for seniors, people with disabilities, and families with children; roll back nationwide protections for people with pre-existing conditions; and cause millions of people to lose coverage. Health policy experts at the Brookings Institution called Cassidy-Graham “the most harmful ACA-repeal bill yet.”  And a new version of Cassidy-Graham would likely leave even more Americans uninsured, because it would likely provide even less federal funding for health coverage than the earlier bill.

Today, about 12 million people in 31 states plus the District of Columbia (DC) are covered under the ACA’s expansion of Medicaid to low-income adults, and about 10 million people across all states get help paying for individual market coverage from the ACA’s premium tax credits and cost sharing reductions.

The Cassidy-Graham bill would eliminate both programs as of 2020 and substitute an inadequate and flawed block grant.

Replacing the ACA coverage provisions with a flawed block grant would not only cause large coverage losses among Medicaid and marketplace enrollees. In some states, it could cause the individual market for health insurance to collapse altogether. CBO concluded that most states couldn’t replace the ACA’s subsidies and “would choose to provide little support to people in the nongroup [individual] market.” With neither subsidies nor an individual mandate (see below) to draw healthier consumers into the risk pool, markets in some states could unravel.

Even more states would likely experience very large premium increases or insurer exits, especially in the near term. Eliminating federal subsidies would create massive uncertainty for insurers, who would have to predict how the individual markets in 50 states and DC would function and how risk pools would evolve. As 36 current and former insurance commissioners wrote, Cassidy-Graham would “severely disrupt states’ individual insurance markets, with sharp premium increases and insurer exits likely to occur in the short term and over time.”

Moreover, the Cassidy-Graham block grant would simply end as of 2027. At that point, Cassidy-Graham would amount to repealing the ACA’s Medicaid expansion and subsidies with no replacement, an approach that would leave about 75 percent of Americans with no individual market coverage options, according to CBO.

Restructuring and Cutting the Rest of Medicaid

Like other ACA repeal bills, Cassidy-Graham would also impose an arbitrary cap on per-enrollee federal Medicaid funding for seniors, people with disabilities, and families with children. This “per capita cap” would cut federal funding for these populations by nearly 9 percent by 2026, and the cuts would keep growing over time, CBO estimates suggest.

To absorb these large and growing cuts, states would have to limit eligibility, cut benefits, or both. Certain services would likely be especially vulnerable to cuts: for example, home- and community-based services for seniors and people with disabilities, an optional benefit that most states already limit based on available funds. And the per capita cap, like the proposed block grant, would also make it harder for states to respond to public health crises like the opioid crisis, since federal Medicaid funding would no longer respond automatically to growing need.

Cassidy-Graham would give states expansive waiver authority to eliminate or weaken ACA protections that prohibit insurers from charging higher premiums to people with pre-existing conditions and require plans to cover essential health benefits. Before the ACA, when these decisions were left to states, only seven states prevented insurers from charging higher premiums based on health status, and large fractions of individual market plans excluded services like maternity coverage, mental health care, substance use treatment, and prescription drugs.

Because CBO was asked to analyze Cassidy-Graham so rapidly, it was unable to estimate the magnitude of its effects on coverage but concluded the bill would cause “millions” to become uninsured. Drawing on CBO analyses of earlier bills, independent analysts at the Brookings Institution estimated last year that a version of Cassidy-Graham would cause about 21 million people to lose coverage in the years when its block grant was in full effect. That would result in a non-elderly uninsured rate of about 18 percent (about 50 million people), versus 10.6 percent (29 million people) in 2017.

Cassidy-Graham would likely cause a smaller increase in the uninsured if enacted this year, since Congress has already enacted one part of last year’s bill: repeal of the ACA’s mandate that most people have health insurance or pay a penalty, which will reduce the number of people with coverage. But the final result would be the same: almost 1 in 5 non-elderly Americans would be uninsured, similar to pre-ACA levels.

In fact, new versions of Cassidy-Graham might result in higher uninsured rates than the prior version. That’s because the 2017 tax law, by repealing the mandate and reducing the number of people with federally subsidized coverage, cut about $300 billion from health coverage programs but then used those dollars to help pay for tax cuts, whereas the original Cassidy-Graham bill relied on the savings from mandate repeal to help fund its block grant. 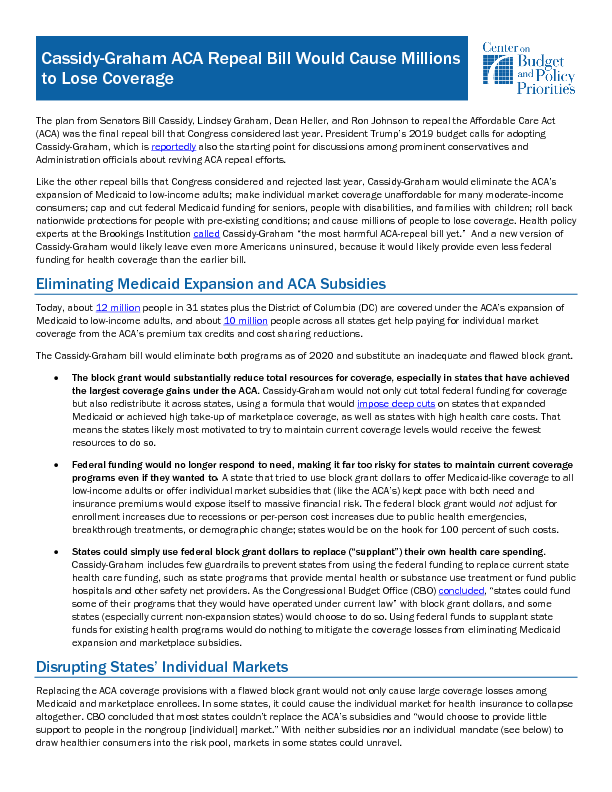