Congressional Republicans are attempting to repeal the Affordable Care Act (ACA) with a bill from Senators Bill Cassidy and Lindsey Graham. We’ve collected our analyses of the proposal here.

This overview of Cassidy-Graham explains that it would cause millions of people to lose coverage, radically restructure and deeply cut Medicaid, eliminate or weaken protections for people with pre-existing conditions, and increase out-of-pocket costs for individual market consumers.

This report finds that the bill’s large cuts in federal funding for health coverage would balloon starting in 2027, affecting all states and totaling $299 billion in that year alone (see graph). 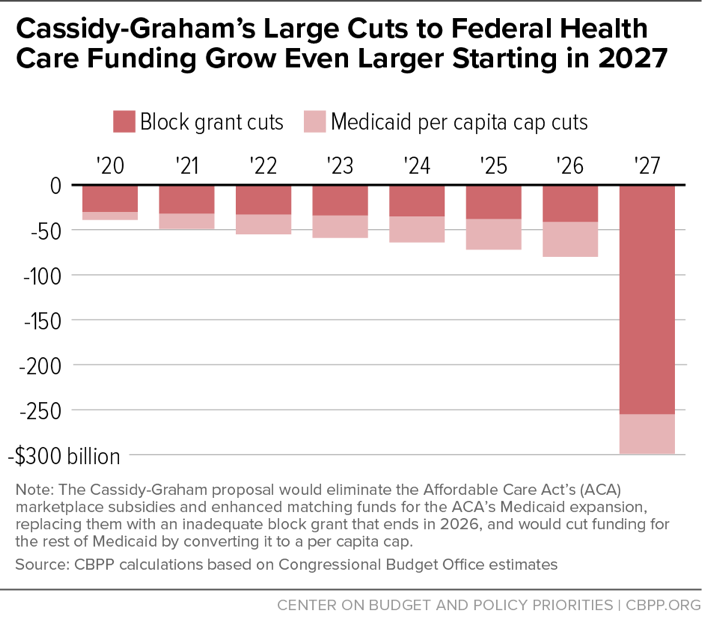 Cassidy-Graham’s Dramatic Funding Cliff Not Required by Budget Rules and Would Have Lasting, Negative Impact

This report rebuts sponsors’ claims that budget procedures forced them to end the bill’s block grant in 2027 and that the resulting funding cliff is unimportant because future policymakers will reverse it.

Senators Cassidy and Graham appear set to take the exact approach they previously criticized the House for taking — rushing an ACA repeal bill that its members didn’t fully understand and in a process that wasn’t transparent — in order to hide the bill’s damaging impact on coverage, consumer costs, and consumer protections, this commentary finds.

This commentary rebuts Senators Cassidy and Graham’s claim that the ACA treats states unfairly and that their plan would do better. In fact, Cassidy-Graham would create funding inequities, as it would raise funding for non-expansion states by imposing huge funding cuts — and thereby forcing coverage losses — on expansion states.

No State Wins Under Cassidy-Graham, Despite Its Funding Redistribution

States that made the most progress in boosting coverage under the ACA — especially due to the Medicaid expansion — would lose disproportionately under Cassidy-Graham. But even states that get a short-term funding boost would eventually see funding cuts, and all states would suffer due to other aspects of the bill, including its Medicaid per capita cap, its removal of protections for people with pre-existing conditions, and the insurance market uncertainty the bill would cause, this post explains.

This post finds that Cassidy-Graham would annually shift tens and then hundreds of billions in health care costs to the states and also make it harder for states to raise their own share of Medicaid funds. This one-two punch would severely strain state budgets at a time when states already face problems in meeting their residents’ needs.

Another way Cassidy-Graham goes further than previous repeal efforts is by imposing even sharper restrictions on state taxes on health care providers, thereby making it even harder for states to sustain their Medicaid programs, this blog post finds.

Senators Cassidy and Graham have reportedly spent the last several days modifying their ACA repeal plan, including to add additional resources for Alaska. But no last-minute changes can alter the fact that Cassidy-Graham harms Alaskans — as well as people in every other state, this post explains.

Estimates from the bill’s sponsors purporting to show that most states would see large funding gains under their proposal are irrelevant because they don’t compare states’ funding under the proposal to what states would receive under current law, this report shows.

This blog post describes a provision of Cassidy-Graham’s block grant that would let states obtain waivers of ACA protections for people with pre-existing conditions and benefit standards for any insurance plan subsidized by block grant funding.

Unlike previous ACA repeal legislation, which would have let states keep their Medicaid expansions but with much less federal funding, Cassidy-Graham would end the expansion altogether, eliminating expansion coverage for 11 million newly enrolled low-income adults, this blog post notes.

Like Other ACA Repeal Bills, Cassidy-Graham Would Cap and Deeply Cut Medicaid

This report explains that Cassidy-Graham would not only end the ACA’s Medicaid expansion but also convert the rest of Medicaid to a per capita cap, cutting funding for seniors, people with disabilities, families with children, and pregnant women by an estimated $175 billion over ten years and more than $1 trillion over 20 years.

This paper explains that cuts due to the bill’s Medicaid per capita cap would make home- and community-based services — an increasingly popular alternative to institutional care — especially vulnerable to deep cuts because most of these services are optional for states.

Coverage gains among American Indians and Alaska Natives due to the ACA are at risk from Cassidy-Graham’s changes to Medicaid, this blog post notes.