As Congress seeks to complete action on appropriations bills for fiscal year 2006, many Members of Congress seem to be laboring under the impression that appropriations for domestic programs have exploded in recent years. This impression appears to stem, in part, from several releases issued by conservative groups charging that the federal government has been on a “spending spree.”

For example, a recent Heritage Foundation brief contends that expenditures for discretionary (i.e., appropriated) programs increased 48 percent between 2001 and 2005[1] and that domestic programs, rather than defense and anti-terrorism spending, have been the main culprit. A memorandum by G. William Hoagland, the respected senior budget staffer for Senate Majority Leader Bill Frist and a former Republican staff director of the Senate Budget Committee, addressed the Heritage contentions. The Hoagland memorandum showed that federal spending as a share of the economy is below its average level for both the 1980s and 1990s and that most of the recent budget growth has occurred in defense and related security programs, rather than domestic programs.[2]

Where does the true story lie? Have appropriations for domestic programs exploded since 2001? This analysis examines the data.

An examination of the growth rates for defense and domestic discretionary programs tells much the same story. Funding for defense and related security programs has grown far more rapidly than funding for domestic programs. (Growth rates are measured here taking inflation and changes in the size of the U.S. population into account; see the box on page 3.)

The picture also remains unchanged if one examines cumulative budget growth between 2001 and 2005, rather than annual growth rates.

Adjusting for Inflation and Population Growth

Due to inflation, a dollar in 2005 is not worth as much as a dollar in 2001.  In addition, when the U.S. population increases, revenues increase because there are more workers paying taxes, and the cost of government programs rise because more children attend school, the number of people seeking government services from passports to child care assistance increases, and so forth.  (The economy also grows, because the size of the labor force a key component of economic growth increases.)

In other words, as the population grows, government services are spread over a larger number of people and supported by a larger number of taxpayers.  Were government to remain static in the face of a growing population, either the share of Americans receiving government services would have to fall every year or the average benefits received by each person would have to be cut every year.  Accordingly, to measure trends in funding levels over time, it is best to adjust for population growth as well as inflation.

Adjusting for population growth does not have a large effect on this paper s findings.  For instance, if one adjusts only for inflation, domestic discretionary funding is found to grow at an average annual rate of 2.9 percent between 2001 and 2005.  Further adjusting to account for changes in the size of the U.S. population lowers the average annual growth rate to 1.9 percent.

To assess changes in the budget as a whole — and how changes in policies affecting the budget have contributed to the reemergence of deficits — one must look at changes in all parts of the budget, including revenues and entitlement programs. To do this, one can examine Congressional Budget Office analyses of the cost of all legislation enacted since the start of 2001, when budget surpluses were large. 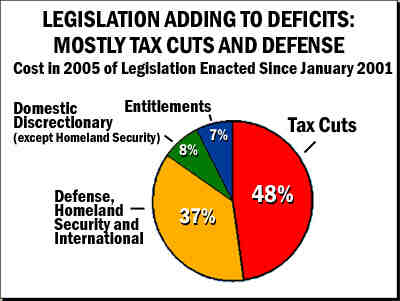 The CBO data show that the single largest factor (among factors that were caused by policymakers’ actions) in the slide from surpluses to deficits has been the tax cuts enacted in recent years. Increases in defense and security-related spending have been the second largest factor. Increases in domestic discretionary programs have played only a modest role.

How Much Have Discretionary Programs Grown

The Heritage Foundation release referred to above notes that discretionary programs grew 48 percent between 2001 and 2005. This number is rather misleading, however. To derive it, Heritage failed to adjust for inflation (acting as though a dollar in 2005 were the same as a dollar in 2001) and used other problematic practices. This number also masks an enormous disparity between the growth in defense and security programs and the much smaller growth in domestic discretionary programs.

Domestic Spending As a Whole, Including Entitlement Programs

Some readers of this analysis may wonder whether the claim that government spending has exploded in recent years and that the bulk of the growth has come in domestic programs might hold true when the analysis is broadened to include entitlements as well as discretionary programs. This claim is not correct, however, even when the entitlements are included.

Finally, as noted elsewhere in this analysis, CBO data show that legislation enacted since the start of 2001 cost $542 billion in fiscal year 2005, substantially more than the size of the deficit in 2005. The CBO data show that enacted increases in defense and security expenditures accounted for 37 percent of this $542 billion in costs, while increases in domestic programs (including both entitlement programs and domestic discretionary programs) accounted for 15 percent of the costs. (Tax cuts were responsible for the other 48 percent of the costs.)

a Interest payments on the debt are not considered as either a defense or a domestic program. Were interest payments to be included as a domestic program, the rise in domestic spending would be smaller than is shown here, because interest costs were lower in 2005 than in 2001.
b On page 2, we noted that funding for defense and security programs increased by an average of 9.5 percent per year from 2001 to 2005, after adjusting for inflation and population growth. The 10.3 percent growth figure cited in this box differs for two reasons. First, it refers to the growth rate for expenditures for defense and security programs. It is customary for budget analyses, including those produced by OMB, to measure changes in funding for discretionary programs and changes in spending for entitlements and the budget as a whole. We follow that convention here. Second, the 10.3 percent figure includes a small amount of entitlement/mandatory amounts for defense and security, while the 9.5 percent figure is limited to discretionary amounts.

Funding for discretionary programs thus grew 44 percent from 2001 to 2005 without adjustment for inflation or population growth and 26 percent with such an adjustment. These figures, however, mask large disparities between growth for defense and domestic programs.

What is “Runaway Spending”?

An Example Illustrates the Misleading Nature of the Heritage Approach

Between 1990 and 2004, American households increased their total expenditures on food by 78 percent. This sort of cumulative figure — the type that Heritage uses — could be used to make it sound as though Americans went on a “food spending spree” or engaged in “runaway food spending.” But such a statement would not be accurate. The annual growth rate of U.S. food expenditures averaged 4.2 percent per year over this period. And as with the figures on domestic spending that Heritage generally uses, neither the cumulative 78 percent overall increase in food expenditures nor the 4.2 percent average annual rate of growth takes inflation or increases in population into account. Doing so reveals that, after accounting for inflation, an American family’s food bill rose by an average of only 0.8 percent per year.

Furthermore, while adjusting for inflation and population is superior analytically to using unadjusted figures, it does not take into account real increases in household income. Over the 1990-2004 period, total disposable (i.e., after-tax) household income in the United States rose by 102 percent, or more than the increase in total expenditures on food. In 1990, food costs equaled 14.4 percent of disposable income. By 2004, they had shrunk to 13.3 percent of disposable income, leaving more income available for other purposes.

Funding for defense and security programs climbed at an annual average rate of 4.4 percent over this period.

The real per capita growth rate figures just cited show the degree to which funding for discretionary programs has simply kept pace with inflation and increases in the U.S. population, and the degree to which it has climbed faster than that. Real per capita growth rates do not, however, tell us whether government programs are growing faster than the economy as a whole and thus whether they are consuming a steadily increasing share of the national income. To determine that, we must examine changes in the federal budget as a share of the economy. When the budget absorbs a rapidly increasing share of the economy, it is growing at an unsustainable rate.

[3] If, however, the existing deficit is so large that it causes the debt to grow faster than the economy, taxes must be raised or programs cut to get the deficit under control. Once that is done, the programs can continue to grow at the same pace as the economy with no need for further tax increases.

[4] CBPP calculations from data issued by CBO in August 2005. Both tax cuts and spending increases result in increases in the cost of interest payments on the debt, since they cause the debt to be larger than it otherwise would have been. The analysis provided here attributes these increased interest costs to the legislation that caused them. For example, the total cost of the tax cuts in 2005 is $260 billion, which consists of $225 billion in direct costs and $35 billion in increased interest payments.

[5] Funding data from 2001 through 2004 are from the Office of Management and Budget, Historical Tables, February 2005. Funding data for 2005 were supplied by CBO and accompanied The Budget and Economic Outlook: An Update, CBO, August, 2005. Funding for relief and reconstruction after Hurricane Katrina, enacted in September 2005, is not included in the figures used in this analysis. (In every other case, these figures cover all discretionary funding, whether “regular” or “emergency.”) Because the Heritage Foundation uses expenditure data rather than funding data and because expenditures for Katrina relief will occur almost entirely after fiscal year 2005 (which ended on September 30, 2005), the Heritage foundation analyses also exclude most Katrina-related costs. Finally, we adjust the OMB and CBO funding data to account for anomalies associated with transportation trust funds, advance appropriations, low-income housing, and the timing of the change in administrations. (Expenditure data do not require such adjustments.) The bases for these adjustments to the funding data are explained in the appendix to The Omnibus Appropriations Act: Are Appropriation For Domestic Programs Out of Control? CBPP, February 1, 2004.