Puerto Rico’s Nutrition Assistance Program, NAP (PAN for its name in Spanish, Programa de Asistencia Nutricional), provides basic household food assistance benefits that help over half of the Commonwealth’s children each month. While this program provides important benefits, NAP’s funding structure limits its ability to ensure that the Commonwealth’s children can get enough to eat. That’s in contrast to the Supplemental Nutrition Assistance Program (SNAP), the major household food assistance program that operates in the states, Guam, and the Virgin Islands, which bases benefits on the cost of food and is able to provide benefits to every eligible child whose family applies.

NAP is important for Puerto Rico’s children given high poverty levels in the Commonwealth: in 2018, well before the health and economic crises caused by the COVID-19 pandemic, about 57 percent of children lived in families with income below the federal poverty line.1 Puerto Rico has never recovered from a recession that began in 2006, and events including two devastating hurricanes, delays in rebuilding aid, and population decline have aggravated those challenges.2

NAP helped over 327,000 children afford food in 2018, about 55 percent of the Commonwealth’s children. More than 78,000 children 4 years old and younger participated in the program, or over 60 percent of children that age.

NAP provides benefits to households based on household size, income, and other characteristics. Households with children received an average of $356 per month in NAP benefits in April 2019, or $110 per person. (Participants will receive somewhat higher benefits from July 2019-July 2020 due to temporary federal disaster and emergency relief.3)

In some municipalities with high child poverty rates, such as Barranquitas, Florida, and Peñuelas, more than 70 percent of children participate in NAP.

Puerto Rico’s total and child population have fallen in recent decades due to a decline in birth rates as well as the effects of a long-term recession and the devastation of Hurricanes Irma and Maria, which have contributed to out-migration.4 The overall rate of population decline may have slowed in 2019, figures suggest.5 The number of children participating in NAP has also fallen since at least 2009. Because the number of children participating in NAP fell at a similar or slower rate than the overall number of children and those in poverty, however, NAP has reached a flat or growing share of children and children in poverty.

NAP and Other Nutrition Programs Help Children Grow Up Strong 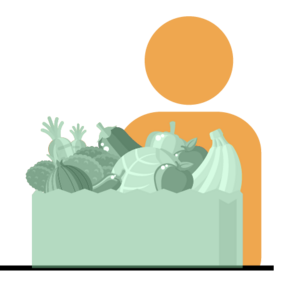 Giving families resources to buy food is especially important for children. Research shows, for example, that adults whose families received help from SNAP as children grew up to be heathier and have better economic outcomes.7

SNAP’s funding structure also enables it to respond to changes in demand, including those due to natural disasters or recessions, which NAP, with its limited funding, can’t.

Under NAP, the federal government provides fewer resources for Puerto Rico than if the Commonwealth provided food assistance through SNAP. NAP is a block grant with capped funding, which has been flat in recent decades apart from temporary increases authorized by federal policymakers following the Great Recession of 2007-2009 and Hurricanes Irma and Maria. The block grant also has received a modest funding increase to respond to the COVID-19 public health emergency and related economic downturn, though much more may be needed for the long-term response.

This capped funding has hampered the Commonwealth’s ability to consistently reach all who would be eligible under SNAP and provide benefits that meet its children’s needs. Meanwhile, SNAP’s funding structure allows the program to provide benefits to all who qualify under its rules, and to expand when the economy worsens or to respond to natural disasters.

Unlike SNAP, which sets eligibility levels based on poverty levels, NAP’s eligibility levels are set to fit the confines of fixed funding, which may not be sufficient to provide benefits based on estimated food needs to everyone who is eligible for the program. These limitations have led NAP historically to have much lower eligibility limits than SNAP’s, which has likely kept many low-income families with children from participating, particularly working families, and many participants receive less than they would under SNAP.

Not only is NAP limited, but other programs serving Puerto Rico’s children, such as Medicaid, Temporary Assistance for Needy Families, and the Child Tax Credit also provide support that is insufficient to meet basic needs and often reflects significant disparities compared to how programs are funded and operate in states and other U.S. territories.

For example, in NAP, a parent of two children who loses a job and has no other income would have received the maximum SNAP benefit of about $509 in the continental United States in 2019, and more in Alaska, Hawaii, Guam, and the Virgin Islands (for example, $650 in the Virgin Islands). Under regular NAP rules (not including the recent temporary disaster benefits), households of three with no income received an average of $376 in NAP benefits in March through June 2019. Similarly, a household of three with one worker and two children (with median earnings and other income for such households) would have received about $354 in SNAP per month in 2019, compared to an average of $288 in NAP in March through June 2019.8

8 This analysis uses median monthly earnings ($808) and other income ($100) among NAP households of three with children and earnings in March through June 2019, when temporary disaster benefit boosts were not in effect. To calculate benefits under SNAP, which has a deduction for shelter costs, we assumed such families had $370 in monthly housing costs, the median housing cost for households receiving NAP in the past year based on CBPP analysis of the 2018 Puerto Rico Community Survey PUMS data.

How Does Household Food Assistance in Puerto Rico Compare to the Rest of the United States?

A Brief Overview of the Nutrition Assistance Program

June 11, 2020
Stay up to date
Receive the latest news and reports from the Center