Puerto Rico’s Nutrition Assistance Program, NAP (PAN for its name in Spanish, Programa de Asistencia Nutricional), helps about one-third of the Commonwealth’s seniors get enough to eat each month by providing basic monthly food assistance benefits. While the program provides important, targeted support for low-income seniors, NAP’s funding constraints make it less responsive to changes in economic conditions, particularly in contrast to the Supplemental Nutrition Assistance Program (SNAP), the household food assistance program that operates in the 50 states, the District of Columbia, Guam, and the Virgin Islands.

Over 300,000 seniors participated in NAP in a typical month in 2018, comprising about one-quarter of all participants. (This brief captures the role of NAP prior to the COVID-19 pandemic.)

Characteristics of Seniors Participating in NAP 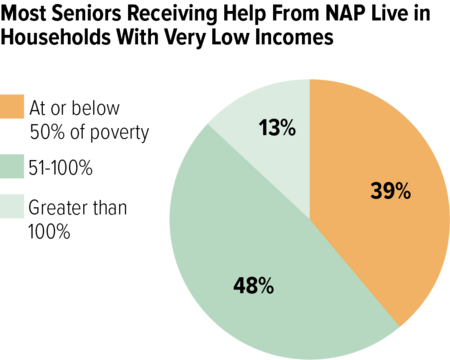 NAP helps seniors throughout the Commonwealth. It helps more than half of seniors ages 60 and up in some municipalities such as Orocovis, Corozal, Villalba, Florida, and Las Marias.

Special Features of NAP for Seniors

NAP has several features that target benefits toward seniors. Seniors can generally apply as a separate household from other individuals they are living with, which can enable them to qualify for higher benefits.

When calculating net income, which is used to determine eligibility for NAP and calculate benefit levels, some income such as Social Security income can often be excluded. (For example, for seniors living alone or with other seniors for whom Social Security benefits are their only source of income, only half of this income is counted for purposes of determining eligibility and calculating net income.) This may help some seniors qualify for NAP or qualify for higher benefits. Seniors also receive a small benefit enhancement beyond the base benefit amount, giving them more money to buy groceries.1 In April 2019, households with elderly individuals received monthly benefits of about $188 per month, or about $140 per person. (Participants will receive somewhat higher benefits from July 2019-July 2020 due to temporary federal disaster and emergency relief.2)

Seniors in Puerto Rico Can Access Some, But Not All, Federal Benefits

NAP is important for Puerto Rico’s seniors given high poverty levels in the Commonwealth: about 38.5 percent of all seniors in Puerto Rico ages 60 and up had income below the poverty line in 2018.3 Puerto Rico has never recovered from a recession that began in 2006, and events including two devastating hurricanes, delays in rebuilding aid, and population decline have aggravated those challenges.4

The senior poverty rate would have been much higher without another key program, Social Security. Social Security income lifted 194,000 seniors ages 65 and up in Puerto Rico out of poverty in 2016-2018, reducing the elderly poverty rate significantly.5 Other federal programs, such as nutrition programs for seniors, are also available to help low-income older adults in Puerto Rico.

While many seniors in Puerto Rico use Social Security to help meet their basic needs, they can’t access the federal Supplemental Security Income (SSI) program, which provides benefits to people who are disabled or elderly ages 65 and older with low income and assets in the states and some territories. Instead, Puerto Rico has a capped grant called Aid for the Aged, Blind, and Disabled. The limited funding for this program results in much lower eligibility levels and benefits for low-income seniors and people with disabilities in Puerto Rico than SSI, resulting in very few seniors receiving benefits that are much lower than they would receive if SSI were available.6

While these features of NAP help seniors better afford an adequate diet, the program, which is constrained by funding limitations, could be strengthened.

NAP is a block grant with capped funding, which has been flat in recent decades apart from temporary increases authorized by federal policymakers following the Great Recession of 2007-2009 and Hurricanes Irma and Maria. (Puerto Rico also has recently received funding to help the Commonwealth pay for increased NAP costs due to the COVID-19 health and economic crises.)

This funding structure has hampered the Commonwealth’s ability to consistently reach all who would be eligible under SNAP and provide benefits that meet all of its participants’ needs. Meanwhile, SNAP’s funding structure allows the program to provide benefits to all who qualify under the program’s rules, and to expand when the economy worsens or to respond to natural disasters.

Unlike SNAP, which sets eligibility levels based on poverty levels and ties benefit levels to the estimated cost of a nutritious diet, NAP’s eligibility and benefit levels are set to fit the confines of fixed funding. That’s because NAP may not have enough funding to provide benefits based on estimated food needs to everyone who is eligible for the program.

1 Puerto Rico calculates a base NAP benefit based on household size and net income. The regulations provide that each elderly individual receives a 20 percent increase applied to this base benefit for a household of one, equivalent to about $22 per person per month in 2020, before the program’s regular adjustments are applied.

8 The Medicare Savings Program, which assists low-income seniors with their Medicare premiums and cost sharing, does not operate in Puerto Rico, and many seniors pay their own Part B premiums. There is also no Low-Income Subsidy program to help with the cost of prescription drugs, although Puerto Rico gets a separate allotment of funds to provide assistance with prescription drugs for some seniors. For more, see Annie Mach, “Puerto Rico and Health Care Finance: Frequently Asked Questions,” Congressional Research Service, June 27, 2016, https://fas.org/sgp/crs/row/R44275.pdf.

9 For example, the average senior living alone in Puerto Rico has $578 in income and receives $148 in NAP (in April through June 2019, when temporary benefit increases were not in place); this senior would receive about $68 in SNAP. (To calculate the SNAP benefit, which includes a deduction for shelter costs, this example assumes $170 in housing costs, the median housing cost for households with elderly individuals receiving NAP in the past year based on CBPP analysis of the 2018 Puerto Rico Community Survey PUMS data.) If they did receive SSI, however, they would receive about $228 in SSI and $15 in SNAP, giving them more in total benefits than the same household would receive in Puerto Rico.

How Does Household Food Assistance in Puerto Rico Compare to the Rest of the United States?