Capital gains taxes are levied on the growth in value of assets like stock since the owner purchased them and are usually triggered when the owner sells the asset.  The amount of capital gain is calculated without taking inflation into account.  However, the top long-term capital gains rate is 23.8 percent, far below the current 40.8 percent top tax rate on earnings from work.  The lower rate and other tax preferences for income from capital gains is sometimes explained, in part, as a rough adjustment for inflation.[4]  Nevertheless, some conservatives argue that the tax should apply only to the growth in assets above the rate of inflation, effectively providing another adjustment for inflation on top of the low 23.8 percent rate.  Further, they claim that Treasury can interpret the tax code in a way that would allow this adjustment without new legislation.  Hemel and Kamin explain, however, that both the policy case and the legal case against this proposal are overwhelming.

Indexing capital gains for inflation would also add to the preferences that income from wealth already enjoys in the tax code.  For instance, the top tax rate on capital gains is 23.8 percent, compared to a top rate of 40.8 percent on wages and salaries.[7]   Further, asset owners have considerable discretion over when they pay the tax, as taxes on capital gains aren’t due when those gains are made, but usually only when the assets are sold.  One justification offered for these preferences — which are themselves costly, skewed to the wealthy, and create tax avoidance opportunities — is that they roughly adjust for the lack of inflation indexing for capital gains.[8]  But even if one were to accept that argument, indexing capital gains for inflation without also increasing capital gains rates would then be double-dipping.

Hemel and Kamin also note that indexing capital gains but not other parts of the tax code would create new tax avoidance opportunities.  Consider a taxpayer who borrows funds to buy an asset.  Her interest payments, which partly reflect the expected impact of inflation, are deductible.  Adjusting only her capital gain for inflation — and not her interest payments — would therefore affect only half of the tax equation.  For example, if the asset grows in value only at the rate of inflation, she would owe no capital gains tax, but she could still deduct the full interest payments.  A transaction with no real economic change would, therefore, reduce the borrower’s taxes.

A rigorous legal analysis that the Treasury Department and Department of Justice conducted in 1992 concluded firmly that Treasury lacks legal authority to index capital gains for inflation.[10]  The analysis found that under section 1012 of the Internal Revenue Code (IRC), the “cost” of an asset used to calculate capital gains does not mean “inflation-adjusted cost” as indexing proponents argue, but rather the nominal price that the owner paid for the asset.  To reach this conclusion, Treasury carefully examined both the dictionary definition of “cost” and the term’s context in section 1012.

While proponents of indexing capital gains argue that developments since 1992 bolster their argument that Treasury can choose to reinterpret “cost” as “inflation-adjusted” cost, Hemel and Kamin show that those arguments are baseless.[11]  If anything, the case that Treasury has this authority is even weaker than in 1992:

If Treasury were to nevertheless assert that it has authority to index capital gains and unilaterally do so, a number of parties could plausibly challenge them in court, Hemel and Kamin explain.  But the specter of being challenged in court shouldn’t be what dissuades the Administration from this course: “As a policy matter, indexing [capital gains] for inflation via regulatory action would be a recipe for arbitrage, revenue losses, and even wider wealth inequality. As a legal matter, the same arguments that led officials in the first Bush administration to reject the idea in 1992 are applicable today.”

[4] As a 1998 Congressional Budget Office report stated, “a preferential rate on nominal [capital] gains provides a rough adjustment for the fact that some gains reflect inflation instead of real increases in purchasing power.” “How Capital Gains Tax Rates Affect Revenues: The Historical Evidence,” March 1988, https://www.cbo.gov/sites/default/files/cbofiles/ftpdocs/84xx/doc8449/88-cbo-007.pdf.  See also Leonard Burman, Statement before the House Committee on Ways and Means and the Senate Committee on Finance on Tax Reform and the Tax Treatment of Capital Gains, September 12, 2012, https://www.taxpolicycenter.org/sites/default/files/alfresco/publication-pdfs/904606-Tax-Reform-and-the-Tax-Treatment-of-Capital-Gains.PDF.

[9] Indexing capital gains for inflation by legislation could mitigate such tax avoidance opportunities, but would leave in place the fact that the underlying policy is regressive and costly.

[10] Timothy Flanigan, “Legal Authority of the Department of the Treasury to Issue Regulations Indexing Capital Gains for Inflation,” Department of Justice, September 1, 1992, https://www.justice.gov/file/20536/download.

[11] See Hemel and Kamin for full citations of cases referenced. 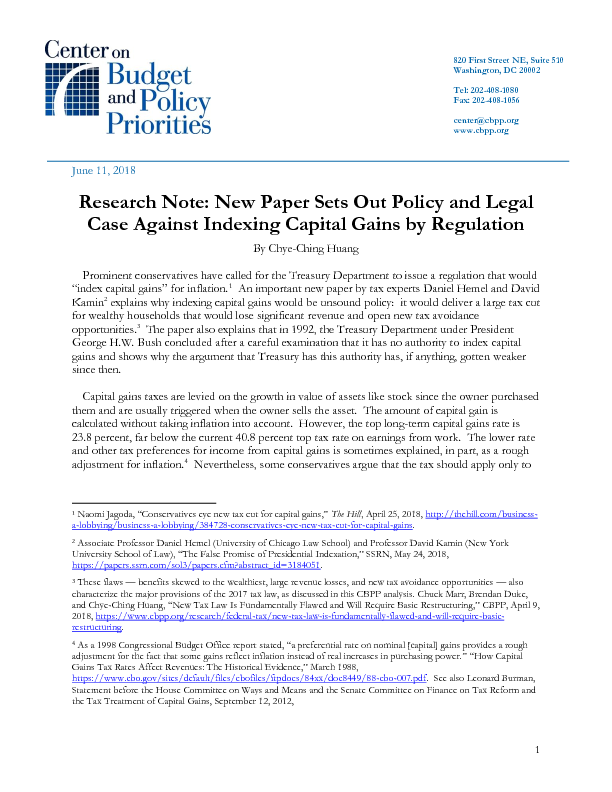