Congressional Republicans this fall are poised to launch step one of a likely two-step tax and budget agenda: enacting costly tax cuts now that are heavily skewed toward wealthy households and profitable corporations, then paying for them later through program cuts mostly affecting low- and middle-income families.  People with disabilities would lose more from the program cuts than they would gain from the tax cuts. 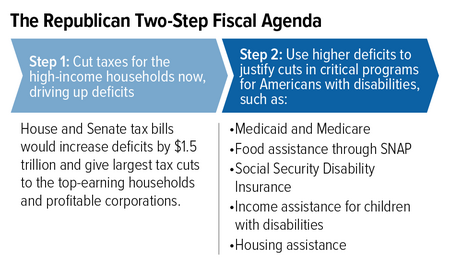 When deficits rise, those who supported the tax cuts will likely label these deficits as unacceptable and point to spending as the culprit.  When that happens, they presumably will call for the kinds of deep cuts they’ve already proposed in their long-range budget plans, which would hit key health care, nutrition, and income assistance programs that many people with disabilities count on.  Those cuts could happen as soon as next year.

When Tax Cuts Must Be Paid For, People With Disabilities Likely to Bear Significant Burden

President Trump and congressional leaders have been very clear on the areas they want to cut.  The Trump and congressional budget plans for the next decade would cut income assistance and health care for millions of low- and moderate-income people with disabilities, including children — making it harder for them to afford the basics and access needed health care.  Indeed, the Administration and congressional leaders have pointed to existing projected deficits — even before $1.5 trillion in deficit-increasing tax cuts are made -— to justify these cuts.

For example, materials accompanying an earlier budget plan put forward in the House claimed that spending rates for programs like Medicare, Medicaid, and Social Security “are unsustainable and the key drivers of our nation’s fiscal challenge,” even as the GOP tax plans call for large tax cuts for the wealthy and profitable corporations.  Once a tax bill becomes law and deficits grow, many of the same policymakers who supported the tax cuts will likely argue that the resulting higher deficits make cutting programs supporting people with disabilities even more urgent.

Disability can happen to anyone — especially with advancing age.  Serious illness or injury pushes many people into poverty, including families caring for children with disabilities, and many others struggle to afford basic needs.  The GOP tax framework released in late September and the tax bill proposed by House Ways and Means Chairman Kevin Brady would do little for these people.  These plans would provide very large tax cuts to wealthy households and profitable corporations, while most low- and moderate-income households would receive only a modest benefit or none at all. When Congress turns its attention to paying for those tax cuts, people with disabilities would likely lose health care, housing and nutritional assistance, and income support that they need to thrive now and in the future.