The American Recovery and Reinvestment Act of 2009 (ARRA) expanded the child tax credit to reach many low-income working families who previously were excluded from it and boosted the credit for many more such families who were receiving only a fraction of the full credit. This action helped millions of children whose parents are child care workers, preschool staff, home health aides, cashiers at retail stores, waiters or waitresses, dishwashers, grounds maintenance workers, people who clean offices or homes, and others who work for very low wages.

President Obama’s fiscal year 2011 budget, as well as legislation that Senate Finance Committee chairman Max Baucus introduced last year, would make this change permanent along with the child-tax-credit expansion that Congress enacted in 2001 and many other tax cuts it enacted in 2001 and 2003. If Congress fails to extend the 2009 improvements, most likely as part of expected legislation to make the so-called “middle class tax cuts” permanent, millions of low-income working families with children will lose much or all of their child tax credit, and many will fall into — or deeper into — poverty. Estimates from the Urban Institute-Brookings Institution Tax Policy Center show that if Congress extends the 2001 and 2003 tax cuts without also extending the 2009 child tax credit improvements:

In addition, an analysis of Census data shows that:

Congress created the child tax credit in 1997 to help families meet the costs of raising children and then expanded it in 2001 and 2009. [1] The full credit is worth $1,000 per child. The credit is partially refundable, which means that some (but not all) low-income families who do not incur a federal income tax liability can receive the credit — usually a partial credit.

Under the 2001 tax-cut law, which made the child credit partially refundable, low-income working families received no child credit on their first $10,000 of wages and then received a credit of 15 cents for every dollar they earned above that threshold until their credit equaled the full $1,000 per child. A family with two children would need earnings of $23,333 before it could qualify for the full credit. This $10,000 ‘zero-credit threshold” was adjusted for inflation; by 2007, families needed to earn close to $12,000 before qualifying for any child tax credit.

In 2008, Congress lowered the zero-credit threshold to $8,500 for that year. This reduced to $21,993 the amount a family with two children needed to earn to qualify for the full credit. In 2009, ARRA established the parameters for the credit that are now in effect: low-income families receive no credit for their first $3,000 of wages and receive a credit of 15 cents for each dollar of wages above that level. A family with two children now is able to receive the full credit when its earnings reach $16,333.

Congress must act this year to deal with numerous tax cuts that are slated to expire at the end of 2010. The fate of the 2009 child tax credit improvement is uncertain.

A return to the 2008 child tax credit parameters, under which no credit was provided for a worker’s first $8,500 of wages, also would substantially shrink the child tax credit for millions of working-poor families.

By lowering the amount of wages that a family must earn before it qualifies for any child tax credit (and before the credit begins to increase for each additional dollar a family earns), the ARRA child credit improvements give parents who are out of work a more powerful incentive to look for and take offers of even very low-paying jobs and part-time jobs, if that is all they can find. These improvements also give poor parents who are already employed an incentive to try to secure more hours of work and raise their earnings.

Consider a parent who is out of work and has two children. If, part-way through the year, she is able to take a job and earn something over $3,000, she will receive a partial child credit, which she would not receive if she remained jobless. And because the child credit increases as her earnings rise, she has an incentive to stay employed and to increase her earnings.

If Congress extends many or all of the 2001 and 2003 tax cuts but fails to extend the current child tax credit rules, families that earn less than $12,850 would be entirely shut out of the credit, and families earning modestly more than that would experience deep cuts in the credit. Tax Policy Center data show that 18.1 million children would have their child credits reduced — 7.6 million children would lose the credit entirely and nearly 10.5 million additional children would receive a smaller credit.[2] (See Table 2 for state-by-state estimates.)

In addition, 600,000 children would be pushed into poverty because the loss of part or all of the credit would lower their families’ incomes below the poverty line. An additional 4 million children who already are poor would become poorer.

Which Families Would Have Their Tax Credit Cut? 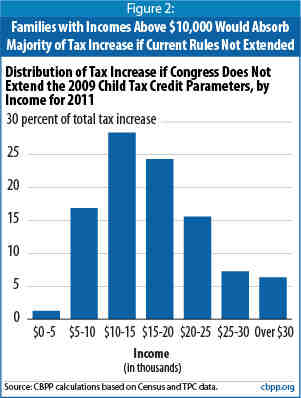 Some people may mistakenly assume that only people with incomes relatively close to $3,000 (the current threshold to qualify for the child credit) would be affected if the threshold were to rise. In reality, because the credit phases in slowly above this threshold — as noted, the full credit of $1,000 per child does not kick in until a family with two children earns more than $16,333 — changing the threshold would affect families at much higher income levels. For example:

What Types of Low-Wage Occupations Would Be Affected?

According to Census data, many of the parents who would face large cuts in their child tax credit if Congress fails to extend the current rules are employed in low-paying jobs that are important to the economy and local communities:

[3] For a discussion of the Administration’s proposal, which is reflected in its FY 2011 budget, see the Treasury Department’s “Green Book,” available at http://www.treas.gov/offices/tax-policy/library/greenbk10.pdf. The Green Book estimates the cost of making permanent the Child Tax Credit provision enacted as part of ARRA at about $9 billion a year.

[5] These are the earnings levels a family will have to attain before it can receive the full credit if the zero-credit threshold is raised to $12,800, since a family’s credit cannot exceed 15 percent of the amount by which its earnings exceed that threshold.