According to final Treasury Department figures, the deficit for fiscal year 2005 was $319 billion, down significantly both from last year’s level and from projections made at the beginning of this year.  This progress is due to an increase in tax collections from last year (and from what had been projected earlier this year).  Some are using this fact to argue that the tax cuts “are working” and are responsible for stronger economic growth and a large increase in revenues.

But this interpretation is misguided.  The recent increase in revenue collections does not reflect unexpectedly fast growth in the economy.  Revenue levels remain quite low by historical standards, and without the tax cuts, revenues would be substantially higher, and deficits substantially smaller.

Recently published Internal Revenue Service data provide additional evidence that tax cuts do not pay for themselves.  The IRS data are for tax year 2003, the year in which the Jobs and Growth Tax Relief Reconciliation Act took effect.  That legislation enacted tax breaks for capital gains and dividends, as well as reductions in marginal tax rates and other tax cuts.  Based on a detailed analysis of individual tax returns for 2003, the IRS concludes, “Because of this law [JGTRRA], even with [an] increase in taxable income, the lower tax rates resulted in a 6.1-percent decrease in total income tax [relative to the previous year].”[1]

There are many reasons to doubt that tax cuts are behind the more recent tax revenue increase.

Both aggregate and more fine-grained analyses show that tax cuts, including those targeted at investment, lose revenue.  In 2003 Congress substantially reduced the tax rate on income from capital gains and dividends and accelerated reductions in income tax rates.  The following table shows the effect of these tax cuts by comparing the actual level of revenues in 2003, 2004, and 2005 with the predicted level of revenues.  (In the table below, the “predicted level of revenues” equals OMB’s 2003 revenue projections not including any tax cuts, reduced by the Joint Tax Committee’s estimate of the cost of the tax cuts that Congress subsequently enacted.)

The Joint Tax Committee’s estimates (and therefore the predicted level of revenues) do not assume any revenue “feedback” — that is, the Joint Tax Committee estimates do not assume that the economy will grow faster as a result of the tax cuts and thereby produce more revenues to offset some or all of the revenue losses from lowering tax rates.  The table shows that the actual levels of revenue have been very similar to the predicted levels, which verifies that there has not been much or any revenue feedback — the predictions have largely been proven correct.  In fact, in two of the three years — and for the three years on average — actual revenues have been below the predicted levels.  Even in 2005, revenues are only $23 billion, or one percent, higher than predicted.  If tax cuts had generated large revenue feedback, revenues would have been well above the predicted levels, instead of at or below them.

Based on a more detailed analysis of individual income tax returns, IRS researchers reached the same conclusion:  that tax breaks for capital gains and dividends, as well as other tax breaks enacted in 2003, substantially reduced tax revenues.  IRS notes, “taxable income, which is the result of AGI less exemptions and deductions, rose 2.5 percent to $4.1 trillion [in 2003].  However, total income tax fell 6.1 percent… for 2003.  This was the third successive year that total income tax declined.  The decline in total income tax for 2003 reflects the reduction in tax rates, under JGTTRA.”[4]

The increase in revenues does not confirm the “Laffer Curve;” tax cuts do not pay for themselves.   Some tax-cut proponents have begun claiming that the recent rise in tax revenues proves that the tax cuts of recent years are increasing revenues and that the “Laffer Curve” is working.  According to this argument, revenues may be higher than they would have been in the absence of the tax cuts.  The consensus among economists and financial analysts and the empirical data, however, are strongly consistent with the basic, common-sense notion that tax cuts do not pay for themselves.  A recent CBO study, for instance, found that, even given very generous assumptions about tax cuts’ impact on growth, they recoup only a fraction of lost revenue.[5]

Not only do the several recent years of revenue declines confirm this, but the experience of the 1980s and the 1990s does as well.  The average economic growth rates for those two decades were virtually identical.  But the rates of revenue growth diverged sharply.  Revenue collections grew much more robustly in the 1990s — when taxes were increased — than in the 1980s, when taxes were cut sharply.  Not coincidentally, the nation’s fiscal position improved substantially in the 1990s, after deteriorating in the 1980s.[6]

[3] Even if one were to assume that the tax cuts had some positive effects on the economy, the cost of the tax cuts would still account for the majority of the current deficit. 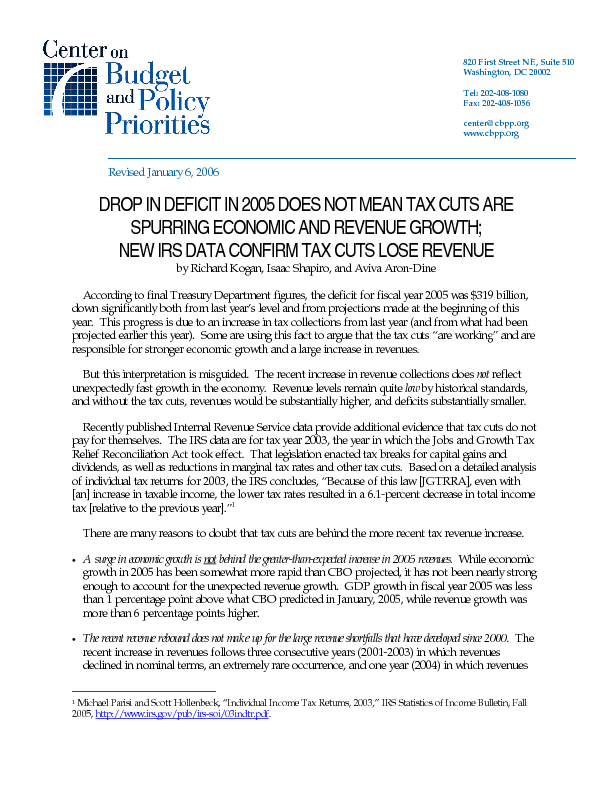