Coverage of Parents Helps Children, Too

The nation has made an important commitment to reducing the number of uninsured children. Over the past decade, the creation of the State Children’s Health Insurance Program (SCHIP) and related changes made by states in their Medicaid programs have boosted children’s enrollment and led to a marked reduction in the number of uninsured children. Nonetheless, almost 9 million children (18 or younger) remain uninsured, and about two-thirds of them are low-income children who are eligible for public coverage but are not enrolled. Most of these eligible but uninsured children are children in low-income working families.

A growing body of research demonstrates that one highly effective way of boosting coverage among these low-income children is to broaden health insurance programs so that the programs also cover their parents. The research shows, for example, that states that have expanded Medicaid coverage for low-income parents have experienced significantly greater gains in enrollment among eligible children than states that did not expand parents’ coverage.

Such findings are especially relevant now, because two actions that Congress may take (or fail to take) in coming months could reduce coverage among low-income working parents. A program known as Transitional Medical Assistance (TMA), under which low-income parents who work their way off welfare may receive Medicaid coverage for 12 months after doing so, expires on December 31, 2006.[1] To maintain this program — which is regarded as successful, has traditionally enjoyed bipartisan support, and was originally created under President Ronald Reagan in 1988 — Congress will need to act in its upcoming “lame duck” session to continue the program. To date, Congress has taken no action on this matter.

In addition, at the state level, a number of states have cut back parents’ Medicaid coverage in recent years as a budget-cutting measure. For example, between 2001 and 2005, Missouri lowered the Medicaid net income eligibility limit for parents from 100 percent of the poverty line to just 22 percent, disqualifying nearly all working-poor parents.

Finally, ninestates (Arkansas, Arizona, Illinois, Minnesota, New Jersey, New Mexico, Oregon, Rhode Island and Wisconsin) use a modest portion of their SCHIP funds to provide health insurance coverage for some low-income parents.[2] Some Members of Congress have begun floating the idea of disallowing the use of SCHIP funds to cover parents when SCHIP is reauthorized next year.

An extensive body of research indicates that such actions (or in the case of the impending expiration of Transitional Medical Assistance, the lack of action) almost certainly would result in the loss of coverage for some eligible low-income children. The research also shows that expansions of parents’ coverage lead to enrollment gains among children. The research, conducted by a number of research teams across the country using a variety of data sources and research methods, yields the following findings:

Eligibility for Medicaid and SCHIP is usually determined on an individual basis: a child may eligible for health insurance, but her mother may not be. Eligibility generally is considerably more restrictive for parents than for children.

The advent of SCHIP, as well as the changes that a number of states made over the past decade to simplify the procedures for enrolling children in Medicaid, led to increased insurance coverage among children. As Figure 1 illustrates, Census data show that the number of uninsured low-income children has fallen markedly since 1997.[6]

More than four of every five low-income uninsured parents (81 percent) are members of working families. Uninsured low-income working parents are especially likely to be employed by small businesses. Almost half of low-income parents who work for firms with fewer than 25 employees are uninsured.[7] 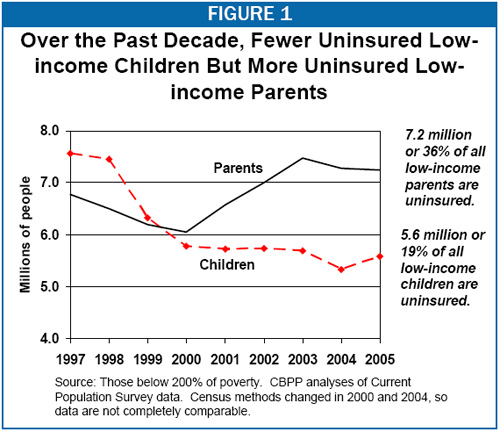 In 2000, we issued a study examining whether there is a connection between Medicaid coverage for parents and coverage for children.[8] We compared trends from 1990 to 1998 in the participation of eligible low-income children in Medicaid in one set of states — states that, during those years, raised their Medicaid income eligibility limits for parents above their cash welfare income limits — to trends in other states that did not take such action. Although children under six with incomes below 133 percent of the poverty line were eligible for Medicaid in all states during this period, children’s participation grew much more robustly in the states where parent eligibility was expanded than in states where it was not, as Figure 2 demonstrates. Not surprisingly, these family-based expansions also increased Medicaid participation among low-income parents.

Parents sometimes do not enroll their children in Medicaid or SCHIP because they do not know about the programs, do not realize their children are eligible, or encounter enrollment barriers such as excessive documentation requirements or complicated applications forms or procedures. Even if they gain coverage for their children, the children may subsequently lose it because of complicated requirements for periodically renewing their coverage. Covering both parents and children (as opposed to children only) generally makes it simpler and provides more incentive for families to obtain and keep coverage, because a single visit to the eligibility office or submission of a single form may lead to coverage for all members of the family. Broader eligibility also may raise the visibility of Medicaid and SCHIP to these families.

Since we conducted this study in 2000, a number of other researchers have analyzed more recent data sources and used other research methodologies. Their findings are consistent with those of our 2000 study. The recent research buttresses the conclusion that covering parents stimulates enrollment by eligible children.

While covering uninsured children improves their access to health care,[14] research indicates that children’s access to care improves to a greater degree when their parents also are covered.

The Institute of Medicine concluded in its report on health insurance and families: “If parents use health care, their children are more likely to use health care as well.”[18]

A study that Barbara Wolfe conducted of Wisconsin’s Medicaid coverage expansion for low-income parents (BadgerCare) found that parent coverage was associated with a 3 percent to 7 percent increase in mothers’ earnings. Wolfe reasoned that being assured that parents would continue to have health insurance coverage when they earned more than the welfare income limits gave women incentives to work longer hours or to take jobs that paid more without worrying they would lose their health insurance.*

* BadgerCare offers eligibility for parents who have worked their way off welfare as long as the parents’ incomes are below 185 percent of the poverty line. Wolfe’s study examined earnings for more than a year after people left welfare. Barbara Wolfe, Thomas Kaplan, Robert Haveman and Yoon Young Cho, “Extending Health Care Coverage to the Low-income Population: The Influence of the Wisconsin BadgerCare Program on Labor Market Outcomes,” Institute for Study of Labor Discussion Paper, Sept. 2005.

The Institute of Medicine also reported in its study: “The health of one family member can affect the health and well-being of other family members. In particular, the health of parents can play an important role in the well-being of their children.”[19] The Institute noted that a parent’s poor physical or mental health can create a stressful family environment that may impair the health or well-being of a child. For example, one study found that the children of parents who suffer from depression have a higher rate of mental health problems themselves and require greater amounts of mental health care and general health care.[20] These findings suggest that better insurance coverage and treatment for parents may ultimately improve the family environment in which children grow up and may contribute to better child health.

Covering Parents Improves Their Own Insurance Coverage and Access to Care

A number of studies demonstrate that, as one would expect, expanding eligibility for parents increases their insurance coverage and improves their access to health services.

Similarly, research has shown that expanded eligibility for parents improves their access to care and increases their use of preventive and primary health services:

The nation has made significant progress in lowering the number of low-income children who lack health insurance coverage. Even so, almost 9 million children remain uninsured, and two-thirds of them are eligible for Medicaid or SCHIP coverage but are not enrolled. A key component of efforts to reduce the number of uninsured children consequently must be to increase participation among low-income children who already are eligible.

A large body of research shows that addressing this issue is tied to coverage for low-income parents. The research is clear that covering more low-income parents will result in significant gains in enrolling eligible children. The research also indicates that policy measures that would curtail — rather than broaden — parents’ coverage would not only result in more uninsured parents but lead to more uninsured children as well.

[1] If TMA expires on December 31, pre-existing rules, under which parents working their way off welfare received only four months of transitional coverage, will go into effect.

[2] Arkansas, New Mexico and Oregon provide SCHIP-funded coverage for parents under premium assistance programs, as compared to their regular SCHIP or Medicaid programs. Arkansas’ program is scheduled for implementation in 2007.

[3] Committee on the Consequences of Uninsurance, Institute of Medicine, Health Insurance Is a Family Matter, Washington, DC: National Academy Press, 2002.

[4] Donna Cohen Ross and Laura Cox, “In a Time of Growing Need: State Choices Influence Health Coverage Access for Children and Families,” Kaiser Commission on Medicaid and the Uninsured, Oct. 2005.

[5] States can expand Medicaid eligibility for parents beyond the limits used for state welfare programs; states may do so either under demonstration project waivers (based on Section 1115 of the Social Security Act) that are approved by the Centers for Medicaid and Medicare Services (CMS) or under Medicaid rules that allow states to use less restrictive methods to count income (and thereby effectively to raise Medicaid income limits for parents). Under Section 1115, states also may secure waivers to use a portion of their SCHIP funds to cover parents; to secure such a SCHIP waiver, a state must already extend SCHIP eligibility to children with incomes up to 200 percent of the poverty line.

[7] These statistics are based on CBPP analyses of the March 2006 Current Population Survey. Working families are defined as those earning more than $5,150 per year, the amount earned by working at the minimum wage for 1,000 hours in a year. The risk that a low-income parent is uninsured is similar whether a family resides in a central city, a suburb or a rural area.

[9] Lisa Dubay and Genevieve Kenney, “Expanding Public Health Insurance to Parents: Effects on Children’s Coverage Under Medicaid,” HSR: Health Services Research, 38(5):1283-1301, 2003. In a more detailed assessment of changes in Massachusetts, Dubay and Kenney similarly found that the state’s Medicaid expansion for parents resulted in increased Medicaid enrollment by eligible children and produced a significant decrease in the percentage of children who were uninsured.

[11] Barbara Wolfe and Scott Scrivner, “The Devil May Be in the Details: How the Characteristics of SCHIP Programs Affect Take-up,” Journal of Policy Analysis and Management, 24(3):499-522, 2005.

[13] Benjamin Sommers, “Insuring children or insuring families: Do parental and sibling coverage lead to improved retention of children in Medicaid and CHIP?” Journal of Health Economics, in press, 2006. (Accepted April 2006).

[18] Committee on the Consequences of Uninsurance, Institute of Medicine, op cit.

[24] Barbara Wolfe, Thomas Kaplan, Robert Haveman and Yoonyoung Cho, “SCHIP expansion and parental coverage: An evaluation of Wisconsin’s BadgerCare.” Journal of Health Economics (in press, 2006). Accepted Dec 2005. The quote is from an interview with Wolfe conducted by the University of Michigan’s Economic Research Initiative on the Uninsured, April 2005.