Advocates of defense funding have issued many public warnings about the severity of the new, lower annual limits on defense funding for 2013-2021 resulting from the combination of the discretionary spending caps set in the Budget Control Act and the failure of the Joint Select Committee on Deficit Reduction (the “super-committee”).[1]  For example, House Armed Services Chairman Buck McKeon (R-CA) claimed recently that “over half of the deficit reduction efforts to date have come out of the military.”[2]  Contrary to this claim, while the cuts scheduled over the next decade will squeeze defense appropriations significantly over the decade, they will shrink non-defense appropriations even more. 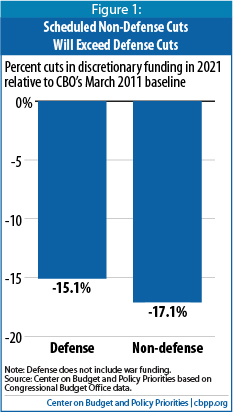 The disparity between the defense and non-defense discretionary (NDD) funding paths is greater if one adopts a longer time horizon and looks at what will transpire over the two-decade period from 2001 to 2021.  Between 2001 and 2021, non-defense discretionary funding will shrink by 0.96 percent of GDP, while defense funding will shrink by a little over half as much — by 0.58 percent of GDP.  (See the appendix for details of the methodology.)

For both defense and NDD programs, the cuts (after adjusting for inflation) largely occur up front by 2013 — the first year that sequestration will be in effect — rather than phasing in gradually over the decade.  After 2013, the defense and NDD caps (as reduced by sequestration) will grow at about the same pace as expected inflation.  Thus, the inflation-adjusted level of those caps will remain largely constant after 2013.  As Figure 2 shows, however, the defense and non-defense caps continue to shrink over this period relative to the size of the economy (that is, as a percentage of GDP).

The fact that, as Table 1 shows, NDD and defense funding will be higher in inflation-adjusted terms in 2021 than they were in 2001 does not mean that adhering to the caps in either area will be relatively easy or painless.  To the contrary.  Adjusting for inflation does not account for the impact of population growth on budgetary costs.  This is just one of the reasons it is often best to measure funding trends as percentages of GDP over long periods of time; relating costs to GDP is a better way to consider both the affordability of policies and the value of what they can buy, taking changes in the size of the U.S. population into account.

To illustrate, if administrative funding for the Social Security program merely grew with inflation for the two decades from 2001 to 2021 (so that 2021 funding were equal to inflation-adjusted 2001 funding), SSA in 2021 would have to serve a beneficiary population about 55 percent larger without any increase in personnel.  In fact, there likely would have to be a reduction in personnel, since wages rise faster than inflation over time.

Similarly, if funding merely grew with inflation between 2001 and 2021, the FBI would likely be trying to keep track of about 15 percent more criminals (the non-elderly population will be about 15 percent larger) with fewer agents (or with agents being paid real wages that were two decades out of date), and the Defense Department likewise would be smaller, equipped with weapon systems that might be two decades old, paying out-of-date real wages, or some combination of the three.

The budgetary pressures that Social Security will create in coming decades are not as great as the budgetary savings that the discretionary funding caps and sequestration will produce.

In short, one cannot argue that the shortfall in the Social Security trust fund is so large as to require radical restructuring of the program but that the cuts promised by the discretionary caps are relatively modest.

Figure 2 likewise shows that whether one considers the post-sequestration caps achievable, incredibly severe, or somewhere in between, they do not squeeze funding for defense quite as much as they squeeze NDD, regardless of whether the benchmark is 2001 or 2011.

Appendix: Figures Used in This Analysis

In this analysis, funding levels for 2011 are as CBO estimated them in March — i.e., before the new 112th Congress enacted cuts.  As Figure 3, below, shows, the cuts and caps that Congress enacted this spring and summer reduce non-defense discretionary (NDD) funding more than they reduce defense, while the scheduled sequestration reduces defense somewhat more than NDD programs.  We choose this 2011 benchmark so that our analysis will reflect the combined effects of these policy changes.

The historical defense figures in this report exclude funding for the Iraq and Afghanistan wars (what the Bush Administration called the Global War on Terror and the Obama Administration calls Overseas Contingency Operations).  Historical NDD funding includes funding that Congress designated as “emergency.”  Our inclusion of emergency funding increases the NDD levels by very significant amounts in 2009 (because of the Recovery Act) and in 2005 (because of Hurricane Katrina), as was shown in Figure 2, and by modest amounts in all other years, including 2001.  Similarly, including emergency funding would have increased defense funding by only 6 percent in 2001 but by an average of 24 percent over the decade from 2001 through 2010, and by 38 percent in the peak war years, 2007 and 2008.

This analysis assumes that Congress will adjust the NDD caps upward by about $4 billion per year.  The Budget Control Act (BCA) permits limited upward adjustments of the NDD caps to increase funding for “program integrity” activities that have been found by CBO to produce net savings for the federal government, such as by increasing the staff resources for fighting fraud in Medicare.  The BCA also allows funding for disaster purposes, primarily or exclusively for FEMA’s disaster relief fund, to be outside the caps.  We consider program integrity and disaster funding as very likely to occur and therefore account for it in our analysis.[4]  Had we not done so, the cut in NDD programs would be a bit deeper than our figures show.

Prior CBPP analyses have adjusted historical NDD figures to account for anomalies such as the shift over time from forward funding to advance appropriations in certain education and training programs and the fact that assisted housing has gradually shifted from 30-year contracts (with the budget authority provided up front) to one-year contracts.[5]  This analysis makes these adjustments as well, so that the year-to-year NDD path shown in Figure 2 is more meaningful.  Adjusting for anomalies in this way makes almost no difference in the NDD figures in Table 1 because the amount of the anomalies is very small.

[1] The Budget Control Act set dollar limits on the annual level of appropriations for discretionary (or non-entitlement) programs for each year through 2021, and also required substantial levels of reductions from those caps for defense and non-defense discretionary programs if the Joint Committee did not succeed.

[2] “McKeon Introduces Legislation To Address Defense Cuts,” http://mckeon.house.gov/this_in_detail.aspx?NewsID=2010.  Senators McCain, Kyl, Graham, Ayotte, and Rubio have also announced an effort to prevent the cuts to defense spending resulting from the failure of the supercommittee from taking place.  See “Senators Announce Effort to Replace Defense Sequester with Other Federal Savings,” http://mccain.senate.gov/public/index.cfm?FuseAction=PressOffice.PressReleases&ContentRecord_id=3d9f6f83-c952-153a-f409-1742bc73a72b&Region_id=&Issue_id=.

[4] The maximum amount of adjustments for program integrity funding, averaging $1.5 billion per year, is specified in the Budget Control Act and we use that figure.  Larger amounts of disaster funding and unlimited amounts of “emergency” funding are allowed under the BCA.  While it is not obvious how best to account for these possibilities, we assume that the amount of such funding will equal the CBO baseline amount of emergency funding for the FEMA disaster relief fund, averaging $2.8 billion per year from 2012 through 2021.

[5] Some education and job training programs are funded for a school year (July through June) rather than for a fiscal year (October through September).  For technical reasons, the amount of funding that is attributed to those programs in a fiscal year sometimes does not reflect the actual size of the program for the coming school year.  For these programs, we adopt the approach used by the Department of Education and show funding for the coming school year.   For the assisted housing programs that initially operated on long-term contracts, we use outlays rather than budget authority in a fiscal year to better represent the actual cost of the programs in that year.   A more detailed explanation of these two types of adjustments is given in the Appendix to Kogan, The Omnibus Appropriations Act: Are Appropriations for Domestic Programs Out of Control? February 1, 2004, at https://www.cbpp.org/sites/default/files/atoms/files/12-16-03bud.pdf.