Several points stand out from the data on income, poverty, and health insurance that the Census Bureau released on September 16:

Looking forward, poverty is likely to remain very high through at least 2011, if the labor market remains weak as is widely forecast. In fact, poverty is likely to rise higher in 2011 (especially using the broader measure of poverty), because most of the Recovery Act’s expanded unemployment benefits, tax credits, and other assistance targeted on people of modest means will expire by the end of 2010 unless Congress takes further action. Without such action, the level of poverty could climb considerably.

Poverty Rose a Record Amount in 2009 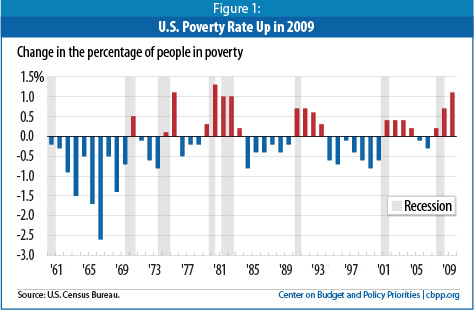 The rise in poverty was fueled by steep job losses. The number of jobs dropped by more than 8 million between January 2008 and December 2009, and the number of people working full time declined even more sharply. Moreover, by late 2009, the share of unemployed workers who had been out of work for more than six months topped 40 percent, a record. The longer people are out of work, the more likely they are to fall into poverty.

3.3 Million More Americans Would Have Been Poor Without Unemployment Benefits

A Center analysis of the Census survey data released on September 16 shows the role played by one key element of the public safety net — unemployment insurance — in pushing back against job loss and rising poverty:

Total unemployment benefit payments increased by $78 billion in 2009, reflecting both a massive influx of laid-off workers qualifying for UI assistance and the UI measures included in the Recovery Act and other legislation. The Recovery Act increased the value of UI benefits by $25 per week and, together with other legislative action, enabled long-term jobless workers to continue receiving benefits for longer periods. [1] (In addition to lifting individuals out of poverty through UI and other direct assistance, the Recovery Act saved or created an estimated 0.9 to 1.9 million jobs on net by the fourth quarter of 2009, according to the Congressional Budget Office. [2] These jobs increased family income and reduced the poverty rate but by how much is not known.)

These data demonstrate the role of public benefits in keeping poverty from rising even higher in 2009. They also show the stakes for families and individuals if Congress allows extended UI assistance to wind down too quickly. Extended UI benefits are scheduled to expire on November 30, 2010. If that occurs and this aid disappears before the job market recovers, it will push poverty higher in 2011.

The impact of government assistance on poverty is considerably more dramatic under a broader measure of poverty that analysts generally favor and that the Census Bureau is due to release later this year. The official poverty definition counts only a family’s cash income; it fails to account for other forms of income — including much of the temporary assistance provided in the Recovery Act.

For several years, federal statistical agencies have been developing a Supplemental Poverty Measure (SPM) that accounts for the effects of non-cash benefits and tax credits; this effort builds on poverty measurement recommendations made by a National Academy of Sciences panel in 1995. In addition to counting more types of income, the SPM will subtract taxes, child care and other work expenses, and out-of-pocket medical expenses from income.

Final SPM results are due next fall, but the Census Bureau plans to release estimates for 2009 later this year using a number of broader measures. These expanded poverty data almost certainly will show that the Recovery Act kept several million people out of poverty and that poverty rose in 2008 and 2009 by significantly smaller amounts than the official poverty figures indicate.

Estimates that the Census Bureau released on September 16 provide an early indication of the impact of tax credits and non-cash benefits on poverty. As the Census Bureau explained, counting food stamps as income lifts 3.6 million people classified as poor under the official poverty data above the official poverty line in 2009. Similarly, Census said, counting tax credits as income (and subtracting income and payroll taxes owed) lifts out of poverty 4.2 million people officially classified as poor in 2009.[3]

Ranks of the Uninsured Swelled in 2009

The number of people without health insurance rose by 4.3 million in 2009, to a total of 50.7 million, while the percentage of people who are uninsured rose from 15.4 percent to 16.7 percent. These are the largest single-year increases on record in data going back to 1987.

The rise in the uninsured population resulted from a decline in private health coverage, driven by a decline in employer-based coverage (which has been occurring for a number of years but accelerated sharply in 2009). Only 58.9 percent of the non-elderly population had employer coverage in 2009, down 3.0 percentage points from 2008 and 8.9 percentage points from 1999. Only a significant growth in Medicaid coverage (and other smaller government-funded or subsidized health care programs) prevented a much more severe decline in overall coverage last year. The percentage of non-elderly people insured by Medicaid increased significantly, from 14.9 percent in 2008 to 16.6 percent in 2009.

Age differences in the insurance data highlight the importance of the federal role in health insurance in offsetting some of the erosion in private coverage. In 2009, despite the severe recession, the number and percentage of children who were uninsured remained essentially unchanged.

The deterioration of the private health insurance market and the protective role of Medicaid illustrate the importance of health reform. Under the Affordable Care Act, starting in 2014, health coverage will be made available through Medicaid to low-income adults with incomes up to 133 percent of the poverty line (roughly $29,000 for a family of four in 2010). In addition, health insurance “exchanges” will be established in all states to make affordable private health insurance available to individuals and small businesses; people who don’t have an offer of affordable employer coverage and have incomes too high to qualify for Medicaid and CHIP but below 400 percent of the poverty line will qualify for subsidies to help them afford coverage in the exchanges. The Congressional Budget Office estimates that by 2019, these aspects of the health reform law will result in coverage for 32 million people who otherwise would be uninsured. Had these provisions been in effect in 2009, the increase in the number of Americans without insurance would have been a modest fraction of what it was.

Recent economic news suggests poverty will be even higher in 2011 than it was in 2009. The labor market remains weak, and forecasters see the annual unemployment rate rising from 9.3 percent in 2009 to at least 9.5 percent in 2010 and declining only slightly to between 9.0 percent and 9.3 percent in 2011.[4] Poverty is likely to remain high even longer than unemployment does. In the last three recessions, after the annual unemployment rate started to fall, the poverty rate took an additional year before it began to decline.

In addition, many of the Recovery Act’s substantial benefits and tax credits are slated to expire soon. Because those provisions provided substantial help to low- and moderate-income households, their expiration at a time when unemployment remains high would lead to significant increases in poverty and hardship.

Data Highlight Need for Stronger Policy Measures in 2010 and 2011

The new Census report underscores the need for additional federal measures to address the continuing weak economy in the short term. Earlier this summer, Congress acted to continue the provision of additional weeks of unemployment insurance benefits to unemployed workers, but only through November of this year. Congress also failed to renew subsidized COBRA health insurance benefits or to extend the additional $25 a week of UI benefits that the Recovery Act provided. And Congress has yet to extend the TANF Emergency Fund, which has created 250,000 subsidized jobs for low-income unemployed parents and youth but is scheduled to terminate on September 30. That Fund also has provided cash assistance to a monthly average of about 150,000 very poor families with children.

To provide additional stimulus while the economy is still weak, Congress should continue to provide extra weeks of unemployment benefits beyond November and extend the TANF Emergency Fund.

Another area meriting attention is the Child Tax Credit. The Recovery Act temporarily extended the credit to, or enlarged it for, about 18 million children in low-income working families in tax years 2009 and 2010. Permitting the expansion in the credit to lapse at the end of this year, as scheduled, would cause an estimated 600,000 children to fall into poverty and another 4 million already-poor children to fall deeper into poverty, according to Center projections using a broader measure of poverty.[5] That also would weaken the economic recovery by shrinking these families’ purchasing power. The families that stand to lose the most include those where a parent works full time at or close to the minimum wage.

Additional Details from the Census Data

Other findings that emerge from the new Census data include:

[3] Census data also show that the one-time federal economic stimulus payments provided to tax filers in 2008, which were not as generous for low- and moderate-income households as the Recovery Act’s benefits, kept close to 3 million Americans out of poverty in 2008 under a broader poverty measure. Source: Unpublished CBPP analysis of the March 2009 Current Population Survey on the Census Bureau's Table Creator II at www.census.gov/hhes/www/cpstc/apm/cpstc_altpov.html.

[4] CBO and OMB forecast an average unemployment rate of 9.0 percent in 2011. The Blue Chip consensus forecast is 9.3 percent..

[6] Kathy Ruffing, “Case For a Social Security Cost-of-Living Adjustment in 2010 Is Weak,” Center on Budget and Policy Priorities, October 15, 2009.

[9] The 2010 Annual Report of the Board of Trustees of the Federal Old-Age and Survivors Insurance and Federal Disability Insurance Trust Funds , August 5, 2010.