If Policymakers Feel a Need to Act, They Should Consider a One-Time Payment

The inflation data, however, do not support an increase: overall consumer prices have fallen significantly in the past year and are not expected to return to their earlier peak until mid-2011. In addition, when no Social Security COLA is provided, Medicare Part B premiums — which are deducted from Social Security checks — are frozen for most beneficiaries so that the Social Security checks do not drop (see the box below).

If policymakers nevertheless choose to act, they should grant a flat, one-time payment as an economic stimulus measure rather than an across-the-board percentage increase that undermines the mechanics and purpose of Social Security’s indexing provisions.

Before 1975, Congress periodically granted across-the-board increases in Social Security benefits — acting ten times between 1950 and 1974 (and six times between 1965 and 1974). The 1969-71 Social Security Advisory Council, a congressionally mandated panel convened every four years to review the program, urged legislators to replace this ad hoc system with automatic increases that would assure beneficiaries of stable purchasing power. Groups representing senior citizens supported the proposal, as did a number of fiscal conservatives who believed that providing an automatic COLA would be more fiscally responsible than basing Social Security benefit levels in part on the outcomes of periodic congressional bidding wars.

In 1972, Congress voted overwhelmingly to adopt automatic COLAs beginning in 1975, with the increases based on the Consumer Price Index for Urban Wage and Clerical Workers (the CPI-W). They also provided for automatic adjustments in the wage and salary level up to which Social Security payroll taxes are levied — the so-called “taxable maximum” — in step with average wage growth. With some refinements (notably in 1977 and 1983), this structure remains intact today.

Prices Have Fallen Significantly Since the Last Benefit Increase 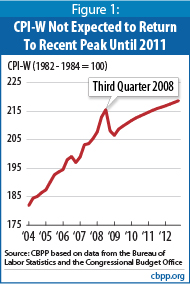 The Bureau of Labor Statistics (BLS) calculates that overall consumer prices have fallen significantly since then (see Figure 1). Energy prices have declined by nearly one-quarter, and prices for other goods and services have increased only modestly. Since the purpose of COLAs is to preserve beneficiaries’ purchasing power, the decline in overall prices means that beneficiaries do not need a COLA in January 2010.

In fact, if Social Security and other indexed benefits that use the CPI-W — Supplemental Security Income (SSI), railroad retirement, veterans’ compensation and pensions, and federal civil service and military retirement — were strictly pegged to the inflation rate, their recipients would receive a negative COLA (i.e., a reduction in benefits) of 2.1 percent in January 2010. Fortunately for those recipients, the programs’ statutes bar a downward adjustment of benefits.

The Congressional Budget Office and the Social Security trustees do not expect the CPI-W to return to its summer 2008 peak until mid-2011. Under that assumption, Social Security beneficiaries and recipients of other indexed benefits will get their next COLA in January 2012. In the meantime, their benefits are safe from reduction.

If Policymakers Decide to Provide an Increase, a Lump-Sum Payment Is the Preferable Approach

Although the automatic-adjustment provisions are working exactly as intended, policymakers face some pressure from constituents to increase benefits. Several bills have been introduced that would grant a special increase. They take two different approaches:

These proposals are costly. A 3 percent increase would cost $15 billion to $20 billion annually in Social Security benefits in 2010 and beyond. (The two bills that propose an across-the-board increase contain no mechanism for cancelling that increase, or subtracting it from future COLAs, so the higher benefits would last for the rest of their recipients’ lifetimes.) A lump-sum payment of $150 for Social Security beneficiaries would cost about $8 billion, while the proposed one-time payment of $250 would cost about $14 billion (including SSI and other programs). The costs for the latter two bills would occur only in 2010 — although proposals likely would be put forward to make these payments again in 2011, since regular COLAs are not expected to resume until January 2012.[1]

If legislators feel compelled to grant an increase, a flat, one-time payment explicitly aimed at stimulating the economy is superior to a percentage raise described as a COLA. Such a flat payment would be more progressive, affording a proportionately larger bonus to people with low incomes. It would help people pay their Part D premiums and other out-of-pocket medical costs — expenses that don’t particularly vary by income. And it avoids tinkering with Social Security’s indexing machinery, thereby smoothing the way to a resumption of regular COLAs at the start of 2012.

Furthermore, because lower-income people are more likely to spend rather than save any extra money they receive, a flat payment would provide more of a boost to the economy than a percentage increase — which is why Congress included a flat, one-time $250 payment to Social Security, SSI, and veterans’ pensions beneficiaries in the American Recovery and Reinvestment Act (ARRA) earlier this year.

If policymakers opt for another flat, one-time payment, there is no justification for not including SSI and veterans’ pensions beneficiaries, since those two programs — like Social Security — are expected to pay no COLA next year. Both are means-tested programs that pay benefits solely to low-income people who are elderly or have disabilities.

Another proposal, which is contained in two other bills introduced in the House (H.R. 2365 and H.R. 2429), would base Social Security’s future cost-of-living increases on the Consumer Price Index for the Elderly (CPI-E), an experimental CPI that attempts to measure the inflation experience of people age 62 and older.

The CPI-E has tended to grow slightly faster than the CPI-W. From December 1999 through September 2009, the CPI-E rose an average of 2.8 percent annually, while the CPI-W climbed an average of 2.7 percent per year (see Figure 2).[2] Nevertheless, like the CPI-W, the CPI-E has fallen in the last year, and there would be no COLA in 2010 if it were the index used to determine COLAs. (It also should be noted that the CPI-E suffers from significant technical limitations that should deter policymakers from adopting it for official use. [3])

Does the CPI Overstate Inflation?

Many economists have concluded that the standard CPI modestly overstates inflation. To address problems in this area, the Bureau of Labor Statistics (BLS) made several changes in the official CPI over the last decade.[4] There is, however, one source of upward bias that the changes in the official CPI have not addressed — what is called “upper level substitution bias.” The standard CPI measures the cost of a fixed basket of goods and services; it does not reflect the savings that households obtain when they switch their purchases to closely related items that are becoming relatively less costly — for example, when families respond to an increase in beef prices by buying more chicken.

Instead of making the significant conceptual change in the way the official CPI is calculated that would be needed to deal with upper level substitution bias, BLS instead has developed an alternative, “chained” CPI that removes this source of bias. The chained CPI rose by an average of 2.2 percent per year between December 1999 (when it first became available) and September 2009 (see Figure 2). That is 0.3 percentage points per year slower than the CPI-W (and 0.5 percentage points slower than the CPI-E). Like those other two indexes, the chained CPI has fallen since last summer, and its use, too, would lead to a zero COLA in 2010.

The chained CPI more accurately reflects shifts in spending patterns in the face of price changes. For that reason, some analysts have recommended that it be used to determine future COLAs in Social Security and other benefit programs as well as the annual adjustments in the features of the federal income tax code that are linked to inflation, such as the tax brackets, the standard deduction, and the personal exemption. [5]

Most Social Security recipients who are 65 or older, and most disabled-worker beneficiaries under age 65, participate in Medicare and opt to have their Medicare Part B (Supplementary Medical Insurance) premiums withheld from their Social Security check. Part B premiums, which finance one-quarter of that program’s costs, would normally rise in 2010 in tandem with increases in Medicare Part B costs. However, several provisions of federal law will shield all but a small minority of Social Security beneficiaries from this premium increase.

The largest group of people whom the hold-harmless rule does not protect — about 17 percent of all Medicare enrollees — consists of so-called “dual eligible” beneficiaries whose Part B premiums are paid by the Medicaid program rather than subtracted from their Social Security checks. The two other groups who are ineligible for the hold-harmless protection are:

In September, the House passed H.R. 3631, which would hold next year’s Part B premium at $96.40 for all enrollees and thereby shield all Medicare enrollees from a premium increase. The Senate has not yet considered this legislation, which would raise the deficit by about $2.8 billion.

(Note: No hold-harmless provision applies to premiums for the Medicare Part D prescription drug benefit. That benefit is offered by a variety of providers that offer differing benefits and charge differing premium amounts. Analysts expect the average Part D premium to go up by about $2 a month in 2010.)

a See the Director’s blog for April 22 and 23, 2009 at www.cbo.gov. See also “The Social Security COLA and Medicare Part B Premium: Questions, Answers, and Issues,” Kaiser Family Foundation, May 2009.

Policymakers Should Also Review Other Aspects of Indexing

The automatic adjustment provisions of Social Security have operated smoothly since 1975, achieving their goals of protecting beneficiaries’ purchasing power and avoiding sudden, ad hoc changes in policy that could weaken the program’s finances. But the current “COLA drought” might spur lawmakers to review several of the system’s aspects:

Many experts regard this as an anomaly that is out of step with the general way that automatic adjustments work in Social Security. Simply de-linking the taxable maximum from the COLA and letting it rise in accordance with increases in wages as it normally does, irrespective of whether a COLA is paid in the same year, would generate several billion dollars in Social Security revenues in the next few years.

Social Security’s so-called “earnings limit” (or “retirement test”), which reduces benefits for some recipients who have significant earnings, also will be frozen this year and next because it, too, is not permitted to rise with wages in years when there is no Social Security COLA. This threshold is now $14,160 for beneficiaries under age 66 and will stay there until COLAs resume. It, too, could be modified so it continues to rise with wages in years in which there is no COLA.

Automatic adjustments in other parts of Social Security and in other programs often take a longer period into account. For example, Social Security’s wage-indexing provisions use annual averages, and the features of the income tax code that are indexed such as the tax brackets, standard deductions, and personal exemptions rely on a 12-month measure of inflation. Using a 12-month average measure for the Social Security COLA would lessen the type of swings we are now seeing, where an unusually high COLA this year will be followed by two years with no COLA at all.