This year, as in 2007, Congress and the President are likely to have a contentious debate about the appropriate level of overall funding for “appropriated” programs — the programs funded through the annual appropriations process, including most education, environmental, veterans, defense, and transportation programs, among others. The President’s new budget provides $15 billion less for domestic appropriated programs in fiscal year 2009 than will be needed to maintain current levels of service in these programs (i.e., to keep funding for these programs even with inflation). It can be difficult, however, for the public and policymakers to understand the implications of differing levels of funding for appropriated programs as a whole. Yet decisions on those overall funding levels have important implications for key public services.

Head Start provides a good example.  On December 12, 2007, the President signed legislation reauthorizing the program, which provides comprehensive early education programs to more than 900,000 disadvantaged infants, toddlers, and preschoolers. The legislation, which received overwhelming bipartisan support in Congress, included policy changes designed both to enable the program to serve more low-income children, including underserved groups such as Native American children children of seasonal and migrant farmworkers and infants and toddlers, and to improve program quality.

To meet these goals, the legislation authorized significant new resources for Head Start.  Members of both parties spoke of the importance of giving more low-income children access to the program.  However, Head Start’s actual funding level each year is set in appropriations bills, and just 14 days after signing the reauthorization legislation, the President signed into law an omnibus appropriations bill that cut Head Start funding for fiscal year 2008, even before adjusting for inflation.  The 2008 cut follows five years in which Head Start was repeatedly funded below the level needed just to keep pace with inflation.  In 2008, funding for Head Start is 11 percent — or $893 million — below the 2002 funding level, adjusted for inflation.

"With this bill, we’re reaching out early to make greater opportunities available for thousands of our neediest children…" — Sen. Edward Kennedy

“With the Senate’s action approving the [Head Start Reauthorization bill]…'all children, regardless of background, will be better prepared to enter school ready to learn and succeed…’” — Sen. Mike Enzi

Congress has been working on a bipartisan basis on a Head Start reauthorization bill for five years.  The bill signed into law by the President in December 2007 garnered strong bipartisan support — it passed the Senate 95-0 and the House 381-36 — and use plaudits from Democrats and Republicans alike.

The legislation includes calls for increased funding and new quality standards.  It:

Under the congressional budget process, authorization bills set program rules and provide a guideline for the amount of funding the authorizers would like to see the program receive.  The actual level of funding a program receives, however, is set through the appropriations process. 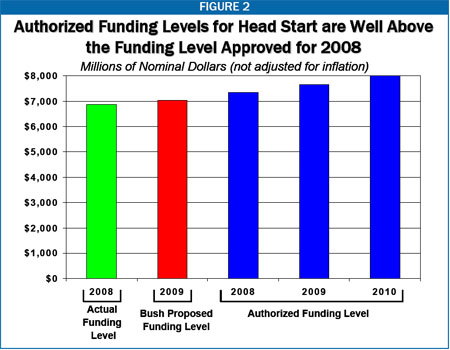 Aggravating this situation, the number of children eligible for Head Start has risen significantly in recent years.  Between 2002 and 2006, the number of poor children under age 5 grew by 13 percent, or 493,000.  Many budget analysts believe that the proper way to compare funding for a particular program is to adjust not only for inflation but also for population growth.  If this is done, funding in 2008 is more than 20 percent below the 2002 funding level (i.e., more than 20 percent below the 2002 level adjusted for both inflation and the increase in the number of poor children in the appropriate age category.)

Throughout the 1990s and into the early part of this decade, there was bipartisan support for expanding the number of children with access to Head Start and improving the program’s quality.  Funding for Head Start rose, as did the number of children served.  More infants and toddlers were served in Early Head Start programs, and more children were able to benefit from full-day (rather than half-day) programs.  The number of teachers with two- and four-year degrees grew as well.  Still, in 2002, only about half of all eligible 3- and 4-year-olds were enrolled in Head Start, and just 3 percent of eligible infants and toddlers were enrolled in Early Head Start.[1]

After 2002, Head Start funding began to fall in inflation-adjusted terms.  Head Start programs were asked to continue to serve roughly the same number of children they served in 2002 but with less money per child.  If the program continues to serve the same number of children in 2008 as it served in 2007 (908,000), it will have to do so with $940 less per child than it received in 2002, after adjusting for inflation.[2],[3]

Alternatively, Head Start programs could start to contract. The President’s 2009 budget shows the number of children who would be served in Head Start under the President’s proposed funding level falling to 895,000 in 2009.

It is difficult to imagine how the goals outlined in the reauthorization legislation could be achieved at current funding levels.  Indeed, some of those goals — the expansion of Early Head Start and the conversion of more Head Start slots to full-day slots — are contingent on increases in Head Start resources.

Furthermore, the legislation’s new requirements concerning educational degrees for teachers take effect regardless of whether added funding is provided.  If funding does not rise over time in inflation-adjusted terms, programs will have to absorb the higher costs of hiring more-qualified teachers by serving fewer children or making cuts in other aspects of the program.

To be sure, not everyone involved in enacting the reauthorization bill saw the need for increased funding.  The President supported the bill’s goal of improving the quality of Head Start programs but did not endorse the higher funding levels it called for, stating, “I am concerned that the bill authorizes spending levels higher than those proposed in my budget.”  He did not comment on how Head Start quality could be improved without additional resources.

If the President or Congress proposed to cut Head Start by 11 percent in a single year, there likely would be many press stories about the probable impact on disadvantaged children across the country — and, as a result, considerable opposition to the proposal.  But when cuts happen little-by-little over the course of several years, they generate far less attention.

For each of the last six years, Head Start has received less funding than in the prior year, after adjusting for inflation.  The annual cuts have been small, and with the exception of 2006 and 2008, Head Start received slightly more funding each year in nominal terms (i.e., without adjustment for inflation).  Unfortunately, Head Start programs are not immune to inflation, which affects the wages of Head Start workers and the cost of classroom materials, food, rent, and utilities.  If funding does not keep pace with inflation, Head Start programs must make do with less or find alternative sources of funding.

Thus far, the impact of these “stealth” cuts has been an 11 percent reduction in Head Start funding since 2002.  It is extremely unlikely that such a reduction would have been approved if it had been proposed for a single year.

Head Start is not alone.  Many programs have been cut little by little over the past five years or so (some areas have been cut more dramatically), and those modest cuts are adding up to larger ones over time.  For example, overall K-12 education funding in 2008 is 8.8 percent below its 2003 level, after adjusting for inflation.

Congress’s lopsided vote in favor of the reauthoriziation bill shows that Head Start retains broad, bipartisan support.  Nevertheless, if the overall level of resources made available for domestic appropriated programs continues to be squeezed as it has in the last few years, Head Start — and various other programs that provide important services — will likely continue being whittled down.

The President and his supporters in Congress often argue that the country cannot afford higher levels of funding for such programs.  Yet overall funding for domestic appropriated programs is lower now as a share of the economy than it was in 2001.  That means these programs have not contributed to any degree to the return of deficits in this decade.[4]

As in all budgeting decisions, the question ultimately is one of priorities.  The country can afford to provide quality early education to low-income infants, toddlers, and preschoolers who need it.  But if the President again insists on reducing overall funding for domestic appropriated programs below the level needed just to keep pace with inflation, the bipartisan goals embodied in the Head Start reauthorization bill are very unlikely to be met.

The damage to public services will not be limited to Head Start.  For numerous other programs, as well, that enjoy broad support among policymakers of both parties and the general public, funding is declinging each year a bit further below the levels needed to meet key program goals.

[1] Data are from the National Head Start Association.

[4] CBPP calculations based on data from the Congressional Budget Office.