The official poverty rate fell for the fourth consecutive year in 2018, from 12.3 percent in 2017 to 11.8 percent in 2018, and median income remained statistically unchanged at $63,179. But the number and share of Americans without health insurance took a turn for the worse. The percentage of people who are uninsured rose in both of the Census surveys (the Current Population Survey and the American Community Survey), the first time this has happened in both surveys since enactment of the Affordable Care Act (ACA).

Some 8.5 percent of Americans — 27.5 million people — lacked health coverage last year, up from 7.9 percent in 2017. Some 1.9 million more Americans were uninsured in 2018 than in 2017, according to the CPS data, with the ACS showing a smaller but still significant increase.

The Census data strongly suggest that efforts to weaken coverage in Medicaid and the ACA marketplaces contributed to today’s disappointing results. The increase in the uninsured rate in 2018 contrasts sharply with the progress made during the first six years after the ACA’s enactment, from 2011 through 2016, when the rate fell significantly every year. (In 2017, the uninsured rate was flat in one Census survey and rose in the other.)

Administration efforts to weaken health coverage provided through the ACA began on President Trump’s first day in office, with an executive order calling on federal agencies to waive and delay ACA provisions “to the maximum extent permitted by law.” These efforts continued as the President and Congress repealed the ACA’s individual mandate (the requirement that most people have coverage or pay a penalty). While repeal did not take effect until 2019, the Congressional Budget Office and other experts concluded that it reduced coverage starting in 2018, by creating confusion among consumers.[1]

Administration cuts in outreach and enrollment assistance have further reduced ACA marketplace enrollment.[2] Also, the Administration’s support for new state policies that make it harder to enroll or stay enrolled in Medicaid may have contributed to the declines in Medicaid enrollment among children and adults that occurred in 2018.[3]

In addition, the Administration’s harsh anti-immigrant stance — including changing how Medicaid eligibility affects decisions concerning who can legally enter the United States and which immigrants here legally can adjust to lawful permanent resident status — have sown widespread fear and confusion in immigrant communities, likely increasing uninsured rates in families that include immigrant members.[4] The new Census data offer suggestive evidence that this climate of fear is taking a toll on health coverage. The uninsured rate among Latinos rose 1.6 percentage points, more than for other racial or ethnic groups, and the uninsured rate among Latino children rose 1.0 percentage point. Also suggestive, coverage losses were especially large among foreign-born residents, both non-citizens and citizens.

Today’s data also show the ACA’s continued strength despite the efforts to weaken it. Millions of Americans benefited in 2018 from marketplace and expanded Medicaid coverage or from improvements in private insurance coverage required under the ACA. Moreover, states that have adopted the ACA’s Medicaid expansion — which enables states to cover all non-elderly adults with incomes up to 138 percent of the poverty line, including those without children — had a much lower uninsured rate last year than states that have not adopted the expansion: 6.6 percent versus 12.4 percent. Had the uninsured rate in non-expansion states fallen since 2013 to the same degree that it fell in expansion states, 4.7 million fewer Americans would have been uninsured last year.

Threats to the ACA’s health coverage gains keep coming, from the Administration’s continued effort to repeal the law through legislation and the courts. The Administration recently urged an appeals court to strike down the entire law, eliminating the Medicaid expansion, the marketplaces and premium tax credits, the protections for people with pre-existing health conditions, and all other ACA coverage provisions. The Urban Institute estimates that if this position were to prevail, 20 million people would lose coverage.[5] That would raise the uninsured rate to slightly above pre-ACA levels.

The official poverty rate fell for the fourth straight year in 2018, from 12.3 percent to 11.8 percent; 38.1 million Americans — including 11.9 million children — had family cash income below the poverty line last year. The decline in the official poverty rate reflects the continued economic growth of recent years; 2018 was the seventh straight year that the economy added more than 2 million jobs and the sixth straight year that wages for non-supervisory workers rose by more than inflation, Labor Department data show.

Looking at income growth over the last four years, however, suggests that the rise in median household income that occurred as the economy recovered from the Great Recession has decelerated. Median income rose 5.1 percent in 2015 and 3.1 percent in 2016, but it rose only 1.8 percent in 2017 and was statistically unchanged in 2018.

In addition, median income has at best risen only slightly above its levels in 1999 and 2007 (after accounting for changes in the Census Bureau’s methodology for measuring it), meaning the typical household’s income is barely above where it was roughly one and two decades ago.

For both African American and Hispanic households, median income and poverty rates remained statistically unchanged. Although racial gaps in poverty have narrowed over time, past and present discrimination and structural barriers to equal opportunity have left poverty rates more than twice as high among black (20.8 percent) and Hispanic (17.6 percent) people as among non-Hispanic white people (8.1 percent). Studies show, for example, that employers remain significantly less likely to call back job applicants with black-sounding names than white-sounding names, even if the applications are otherwise essentially identical. For generations, many people of color have faced barriers to equal wages, fair housing, good schools, and high-opportunity neighborhoods.

Other Census data released today show that key anti-poverty programs reduce hardship for tens of millions of Americans; without them, poverty would be dramatically worse. Under the Census Bureau’s Supplemental Poverty Measure (SPM), which provides a more complete picture of the programs’ impact than the official poverty measure in part because it takes non-cash benefits and taxes into account, refundable tax credits (mainly the Earned Income Tax Credit and the Child Tax Credit) lifted 7.9 million people out of poverty in 2018. SNAP (food stamps) lifted 3.1 million people out of poverty, while rental assistance lifted out 3.0 million people, the Supplemental Security Income (SSI) program for low-income people who are elderly or have disabilities lifted out 2.9 million, and Temporary Assistance for Needy Families (TANF) and related programs lifted out 438,000. These programs also reduced the severity of poverty for tens of millions more people. (Note: these figures understate these programs’ anti-poverty impact because they don’t correct for the underreporting of government benefits in the survey data.)

The SPM, unlike the official poverty measure, did not decline in 2018. Differences in how the poverty thresholds are set across the two measures and changes in benefit receipt mean that poverty trends can differ year-to-year across the measures. Generally speaking, year-to-year changes in the official poverty measure are primarily a gauge of the private economy, while the SPM also reflects changes in the costs of certain necessities and benefits.

These strong anti-poverty impacts would be substantially weakened by program cuts the Administration has repeatedly sought.[6] The President’s 2020 budget[7] would cut deeply a number of the same low-income assistance programs that today’s Census data show are effective in reducing poverty — including SNAP, rental assistance, SSI, and TANF. The Trump budget also would cut health insurance drastically.[8]

Such cuts would increase poverty and swell the ranks of the uninsured. They also would increase inequality, especially when combined with the 2017 tax cuts, which went mostly to high-income individuals and large, profitable corporations.

In addition, a number of the Administration’s regulatory changes and proposals would reduce program participation and increase poverty. These include two proposed SNAP regulations that the Administration itself says would take food assistance from nearly 4 million people, including 755,000 adults who are among the poorest people receiving SNAP. And the recently issued final “public charge” regulation sharply alters how the receipt of public benefits is factored into decisions concerning which prospective immigrants can legally enter the United States and which immigrants here lawfully can adjust their immigration status. Though not yet in effect, the regulation is already creating confusion and fear, leading many lower-income families that include immigrants to forgo benefits for which they qualify.[9]

To make further progress on poverty and income, policymakers should pursue a different course. As one example, the Working Families Tax Relief Act — sponsored by Senators Sherrod Brown, Michael Bennet, Dick Durbin, and Ron Wyden along with 42 Senate co-sponsors — would raise the incomes of an estimated 46 million households by expanding the Earned Income Tax Credit and Child Tax Credit. It would lift an estimated 10 million people above the SPM poverty line and cut the child poverty rate by more than one-fourth.[10]

A National Academy of Sciences committee charged with recommending ways to reduce child poverty recently noted that stronger income assistance for families with children is linked with healthier birth weights, better childhood nutrition, higher school enrollment, higher test scores, higher high school graduation rates, less drug and alcohol use, more positive behavior, and higher college entry rates. “[T]he weight of the causal evidence indicates that income poverty itself causes negative child outcomes,” the committee concluded. It also found that combining tax-based approaches to reducing child poverty (such as those in the Working Families Tax Relief Act) with other assistance such as child care subsidies could cut child poverty by more than half and also increase parental employment. Society as a whole would gain, because reducing child poverty has lasting benefits for children’s health and their future contributions to the workforce and society.

[8] The SPM does not treat health insurance as income (or calculate the number of people lifted out of poverty by health coverage programs). Having health insurance can affect a family’s poverty status indirectly under the SPM, however, by reducing its out-of-pocket medical expenses. 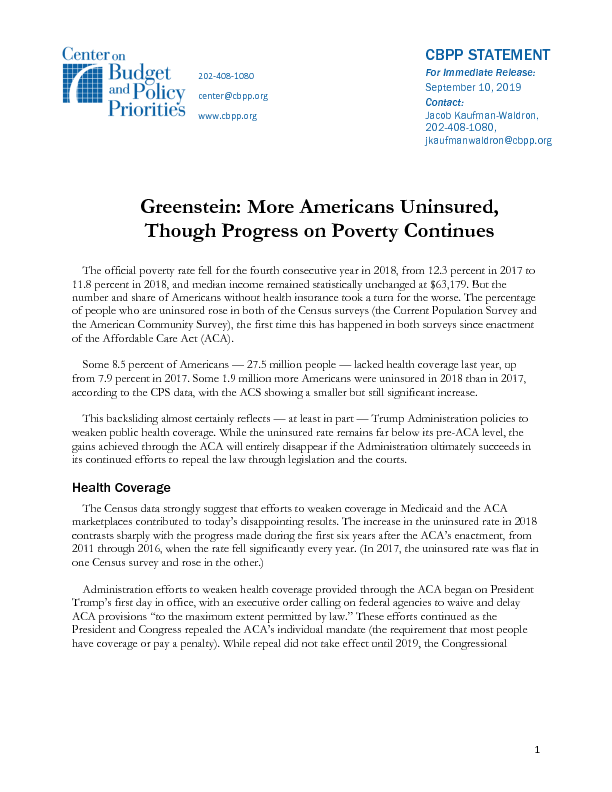