Commentary: At 100 Days, an Emerging Agenda that Hurts Struggling Americans

At nearly 100 days in office, President Trump has begun to define and implement an agenda that would harm the families he says he wants to help — those struggling in today’s economy — often to help drive policies that would benefit very high-income households and corporations, including firms engaging in behavior that can place their employees or customers at risk.

President Trump has begun to define and implement an agenda that would harm the families he says he wants to help.While Congress has not adopted major legislation that implements the Administration’s priorities, the winners and losers from the Administration’s agenda are becoming increasingly clear as a result of the legislative proposals it has made or supports; the bills it has signed to overturn regulatory actions designed to protect the safety, health, and economic security of workers; and its executive orders and other administrative actions.  The Administration is compiling a record of undermining policies that aid struggling workers, often to the benefit of well-heeled interests.

(While we focus on a set of health, labor, budget, and tax policies here, the Administration’s harmful agenda extends far more broadly, including immigration policies that are hurting families and communities and environmental policies that will reduce broad environmental enforcement efforts and hinder progress on climate change.)

The Administration has strongly supported the House “repeal and replace” bill that would cause an estimated 24 million Americans to lose health care coverage, and make coverage worse or less affordable for millions more, by cutting hundreds of billions from Medicaid and from subsidies that help moderate-income people afford private coverage offered through the Affordable Care Act (ACA) marketplaces.[1]  The resulting budget savings would largely go to provide tax cuts for people with high incomes and corporations.

At the same time, the Administration has acted to undermine the ACA marketplaces — making it harder and more expensive to obtain adequate health insurance — and to weaken Medicaid by:

The President also signed legislation to overturn a regulation that would have prevented states from imposing ideological criteria on family planning providers that bar qualified providers from receiving federal Title X family planning funds — such as whether the provider also performs privately funded abortions (federal funds can’t be used for abortion except in cases of danger to the life of the mother, rape, or incest).

By signing legislation or through executive action, the Administration has overturned or delayed implementation of several important regulations that protect workers and those who are saving for retirement.[4]  These Administration actions have benefitted businesses with unsafe workplaces and financial services firms that provide biased (i.e., self-serving) advice to retirement savers that can reduce savers’ returns on their investments but pad the firms’ profits.

In the Administration’s so-called “skinny” budget of March, the President proposed eliminating the sequestration budget cuts in defense spending and paying for that move by adding $54 billion in budget cuts to non-defense discretionary programs in 2018 — on top of the damaging sequestration cuts already slated to take full effect for the first time next year.  The skinny budget doesn’t delineate funding levels for every program, but the Administration has made clear that a host of areas important to struggling Americans and to our nation’s future economic health would be hit hard, including aid to college students, job training, economic development, and basic scientific and medical research.

Millions of students attend college with the help of student loans.  When the time comes to start repaying those loans, a private company (a “student loan servicer”) is supposed to help borrowers choose a repayment plan, process loan payments, and contact borrowers who fall behind on their payments to help them avoid default.

The Consumer Financial Protection Bureau (CFPB) has documented widespread concerns related to student loan servicers, which has helped lead to a broad recognition that borrowers deserve better quality loan servicing — particularly important for borrowers who are struggling to repay their loans and could benefit from federal “income-driven repayment plans,” which set loan payments based on borrowers’ incomes.[12]

To help address these concerns, the Obama Administration issued three policy memos that established new student loan servicing standards for the next round of student loan servicing contracts.  They called for a single student loan online platform that would give borrowers a central place to get basic information about their loans and to conduct business online, such as making loan payments.  The standards also called for servicers to do more to help struggling borrowers and ensure that all borrowers receive quality customer service and understand their repayment options.

But the Trump Administration withdrew these memos, and with them, the new standards, creating significant uncertainty both about whether new loan servicing contracts can be awarded in a timely way before the current contracts expire and whether the Administration is dropping the commitment to improve loan servicing and help struggling borrowers manage their student loan debt effectively.[13]  If so, certain loan servicers — including those with a history of providing poor service — may come out ahead, while borrowers’ problems grow.

In his inaugural address, the President said that, when it comes to taxes, he would make every decision “to benefit American workers and American families.”  His proposals and actions to date belie that standard.

This week, the Administration reiterated costly and regressive elements of the President’s campaign tax proposal, including: cutting the corporate tax rate to 15 percent; a rate cut for “pass-through” businesses that would go primarily to wealthy investors and tax avoiders; and repealing the estate tax, which would prove a windfall for the heirs of the nation’s richest 0.2 percent of estates.[14] Due to these and the President’s other announced tax policies, the 1 percent highest-income Americans would receive tax windfalls that would easily exceed $250,000 a year on average (and more than 10 percent of their after-tax income).

At the same time, the proposal is vague when it comes to policies that are meant to help working families.  Its flagship proposal to help working families — raising the standard deduction — provides no help to millions of working families because they have incomes that are too low to benefit from an increase to the standard deduction.  Indeed, the Administration provides so little detail about rate brackets and personal exemptions in its tax proposal that it’s impossible to tell whether it actually raises taxes on millions of low- and moderate-income families, as his campaign plan did.[15]

The top-tilted tax proposals in Trump’s announcement would cost more than $5 trillion over ten years, adding to deficits and debt and creating pressure for cuts in programs benefiting middle- and low-income people.

The Administration has indicated that it also plans to use its administrative authority to make it easier for high-income people and corporations to avoid taxes. An executive order of late last week appears to pave the way for an eventual roll back of regulations aimed at preventing profitable multinational corporations from avoiding U.S. taxes by relocating their tax residence offshore.  Doing so would cost the federal government about $400 to $600 million each year.[16]

We’re barely 100 days into the Trump presidency but, for struggling Americans, the early signs are far from reassuring.

[4] For a more comprehensive list of Administration and congressional actions on labor and employment issues, see the Economic Policy Institute’s “Perkins Project on Worker Rights and Wages: Policy Watch,” http://www.epi.org/policywatch/.

[11] For a summary of the rule, see: https://www.dol.gov/sites/default/files/overtime-overview.pdf. 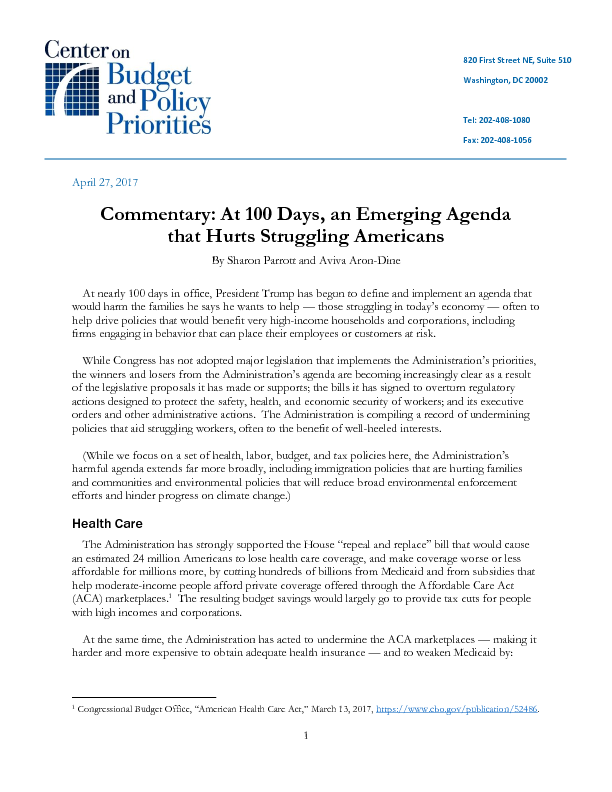