Nearly 3,800 public housing agencies (PHAs) across the country provide federally funded rental assistance to 3.2 million families through the Housing Choice Voucher and public housing programs.  Our new paper explains why consolidating the administration of these programs would make them more efficient and effective, and it outlines what the Administration, Congress, and the states can do to help.

The large number of PHAs — some of which own or administer as few as four rental units — raises agencies’ administrative costs.  PHAs that administer fewer vouchers have significantly higher costs per family served than larger programs (see graph), mostly because some basic administrative functions take essentially the same amount of time regardless of how many vouchers a PHA administers. 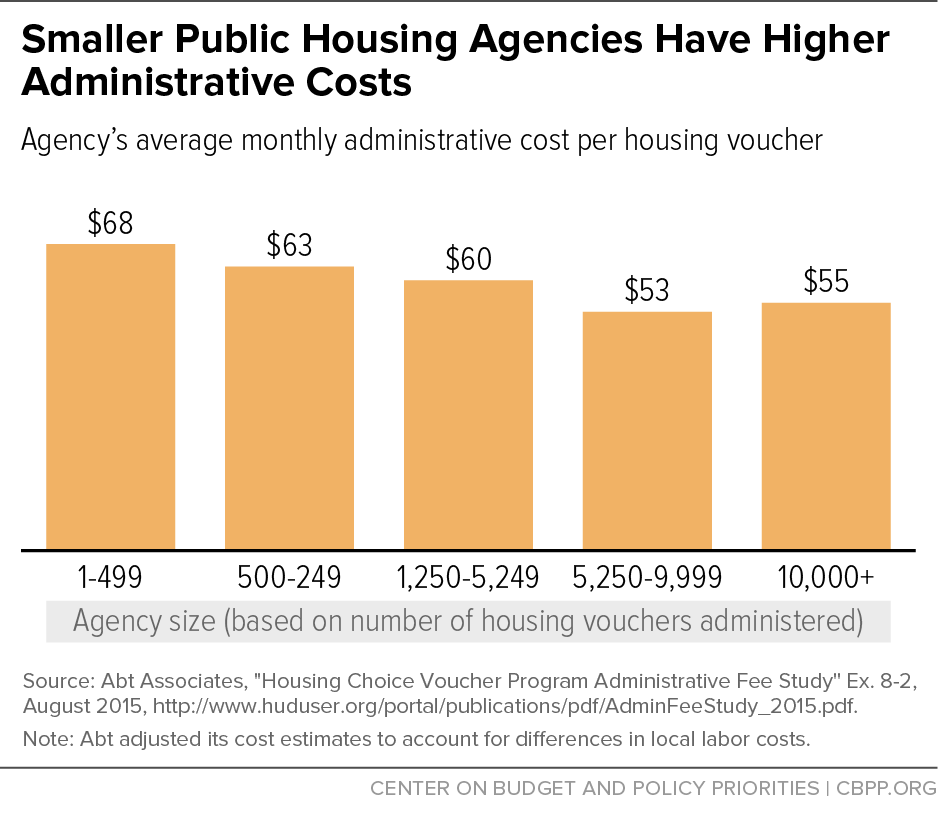 The large number of PHAs raises federal oversight costs as well, and for basically the same reason:  the amount of federal staff time required to conduct many oversight functions is roughly similar for each PHA regardless of how many families a PHA serves.

Also, the balkanized rental assistance administration within metro areas hinders families’ ability to use rental vouchers to live where they choose, including in safer neighborhoods that have better schools and access to jobs but are located in another PHA’s jurisdiction.  In 97 of the nation’s 100 largest metro areas, one PHA administers the Housing Choice Voucher program in the central city and one or more different agencies serve suburban cities and towns.  (In 35 of these metro areas, voucher administration is divided among ten or more agencies.)  Agency staff may be unfamiliar with housing opportunities outside their jurisdiction, and PHAs in neighboring communities may be reluctant to accept new families or help them find a willing landlord, seeing newcomers as potential competition with current residents for scarce rentals.

Despite the potential benefits of achieving economies of scale and facilitating administration of rental assistance throughout a metro area through consolidation, few PHAs have voluntarily merged with others.  Local boards of directors — and the public officials who usually appoint them — commonly want to retain their agency’s individual identity, making forming a consortium with other agencies a more attractive option.

For a consortium actually to be more efficient and effective, however, requires a change in federal regulations to permit the PHAs in a consortium to have a single funding contract with the Department of Housing and Urban Development.  The Administration, which has proposed such a change for the housing voucher program, should act promptly to finalize it.  The Administration also should revise the voucher administrative fee policy to remove the financial disincentive for small PHAs to enter into consortia or otherwise consolidate.

Congress could facilitate regional administration by providing the $15 million that the President’s 2017 budget requests for a three-year demonstration to help PHAs in ten regions collaborate on initiatives to help low-income families use existing vouchers to move to higher-opportunity neighborhoods.

And, in the small number of states where state laws governing PHAs may prevent them from forming consortia, policymakers should revise their outdated statutes.