Note: This blog post was updated on December 28, 2012 to reflect the latest data.
Image 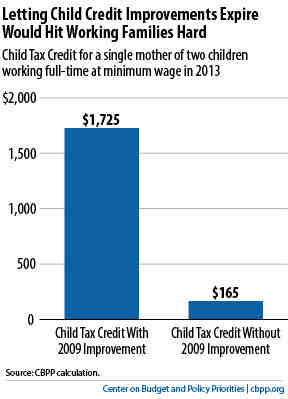 As the Tax Policy Center’s Elaine Maag notes, the 2009 Recovery Act improvements to the Child Tax Credit, which are due to expire at the end of the year, are crucial for low-income working families.  Extending them — and also extending the Recovery Act improvements to the Earned Income Tax Credit (EITC) — would strengthen the economic recovery and help millions of families make ends meet. Take, for example, a single mother with two children who is trying to support her family through work rather than welfare by working full-time, year round at the minimum wage and earning around $14,500.  We calculate that she would see her Child Tax Credit plummet next year by over $1,500 — from $1,725 to just $165 — if the 2009 improvements expire. The Recovery Act improved the Child Tax Credit so that it would reach many low-income working families who had been excluded from it and many other families would receive a larger credit. The Recovery Act also strengthened “marriage penalty relief” in the EITC (that is, it reduced the financial penalty that some couples receive when they marry by allowing them to qualify for a larger credit), and it expanded EITC benefits for larger families. Combined, these Recovery Act improvements lifted 1.5 million people, including almost a million children, out of poverty in 2010 and lessened the severity of poverty for nearly 15 million others, including 7 million children. The Tax Policy Center estimates that if the improvements expire:
Related Posts:
Topics:
Federal Tax, Personal Taxes, Business Taxes, Tax Credits for Individuals and Families
PreviousDon’t Expect Big Savings on Care for “Dual Eligibles,” New Study Suggests
NextHousing Policy Should Put More of Its Money Where the Need Is
Stay up to date
Receive the latest news and reports from the Center