I laid out some short-term steps earlier this week that we could take to lower poverty.  In this post, I take a look at what we should do over the longer term.

First, poverty was growing even before the Great Recession. Poverty rose during the economic expansion of 2001-2007, the first time on record that the official poverty rate was higher at the end of a recovery than before it.  This suggests that we can’t count on economic growth alone to lower poverty unless the growth is stronger than in the last recovery.

Second, the safety net matters. While the Great Recession pushed poverty upward, the safety net pushed back, so the actual increase in poverty — particularly when measured with a poverty rate that includes the value of tax credits, food stamps, and other non-cash benefits — was far smaller than it would have been.  We should continue some of the improvements made in the safety net during the recession, including improvements in the Earned Income Tax Credit (EITC) and Child Tax Credit, which together kept an estimated 1.6 million people out of poverty in 2010 and lessened the severity of poverty for nearly 13 million others (see chart). 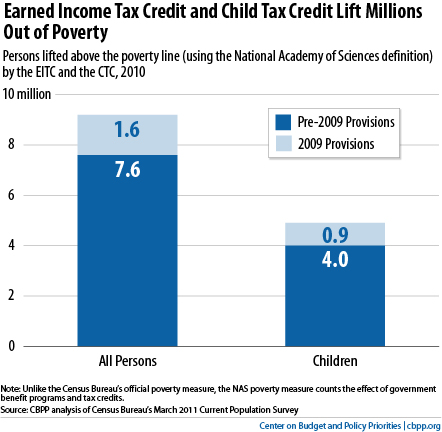 Third, deficit-reduction plans can and should spare programs for the most vulnerable. Successful past deficit-reduction efforts protected key supports, such as food stamps, Medicaid, and tax credits for low-and moderate-income working families, and even included initiatives to reduce poverty.  Recently, a group of religious leaders from dozens of Christian denominations and organizations issued a statement of deficit-reduction principles; the leaders proposed safeguarding key low-income programs in a “circle of protection.”  In addition to the core low-income assistance programs, these leaders urged policymakers to protect longer-term investments such as Head Start and low-income education and training assistance.

Fourth, such anti-poverty and opportunity-promoting policies have benefits for the economy and society and help ensure that the future labor force can compete and adapt. Studies find that ensuring adequate income helps young children succeed in school and work and earn more later in life.  Moreover, even during a time of general deficit reduction, spending money on further improvements in education and training, from the pre-kindergarten years through college and job training, makes long-term economic sense.

Besides protecting current anti-poverty assistance, specific steps forward could include a focus on shifting from regressive tax deductions toward tax credits, including the creation of a new renters’ credit to help low- and moderate-income renters; expanding the EITC for low-income childless workers, who currently receive little other assistance; expanding support for early education; and improving Pell Grants, other post-secondary education assistance (such as permanently extending improvements in the American Opportunity Tax Credit), and proven job-training initiatives that prepare people for jobs for which the demand is increasing in the local economy.

Modest progress in the private sector against poverty and inequality may be possible over the long term through steps like raising and indexing the minimum wage, and better enforcing wage and overtime rules.

Such steps would be just a beginning, but they would show that it’s possible to make progress against poverty — even as we reduce our deficit.