Why We Should Renew Federal Emergency Unemployment Insurance, Part 2

| By Chad Stone
Part 1 of this post discussed the adverse consequences for the long-term unemployed and the economy if lawmakers let emergency federal unemployment insurance (UI) expire at the end of the month.  As explained below, it would also be unprecedented to let the program expire when the economy is as far from full employment as it is now. Congress has authorized emergency federal UI in every major recession since 1958 and has always continued these programs until the labor market improved to the point where unemployed workers could find a job in a reasonable period of time. The highest unemployment rate at which we let any previous program expire was 7.2 percent.  Unemployment will still be higher than that — 7.6 percent — at the end of next year, according to the November Blue Chip consensus forecast of private economists. Moreover, the amount of unemployment that specifically reflects weakness in the economy is much greater than when we let any previous program expire. The November unemployment rate of 7.7 percent includes 2.3 percentage points of “excess unemployment” caused by weak aggregate demand (because the economy is still a long way from fully recovering from the Great Recession), plus 5.4 percentage points of unemployment associated with other factors, including job turnover that exists even when jobs are plentiful. That 5.4 percent is the Congressional Budget Office’s (CBO) measure of what economists call the “natural rate of unemployment” or NAIRU (for “non-accelerating inflation rate of unemployment).  It’s what CBO estimates the unemployment rate would be if the economy were operating at full potential.
Image 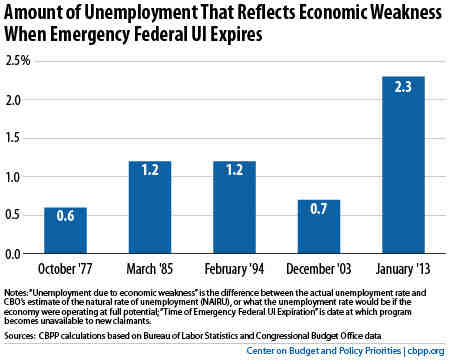