Why We Should Renew Federal Emergency Unemployment Insurance, Part 1

| By Chad Stone
My latest US News & World Report blog post urges policymakers to address the scheduled expiration of federal emergency unemployment insurance at the end of this year:

Policymakers must not let emergency federal unemployment insurance fall through the cracks as they work to solve the fiscal cliff dilemma.  The stakes are too high for unemployed workers who are still struggling to find a job and for the economy itself.

Unemployment insurance gives valuable financial support to unemployed workers and their families.  The federal emergency program, called Emergency Unemployment Compensation (EUC), provides additional weeks of benefits to workers who run out of their regular state benefits before they can find a new job.  EUC has a high “bang-for-the-buck” impact as stimulus because jobless workers spend the money fast and its effects spread through the economy. A recent Congressional Budget Office report estimates that renewing EUC for another year, which would cost $30 billion, would boost gross domestic product by 0.1 percent to 0.5 percent next year and raise full-time-equivalent employment by 100,000 to 500,000 in the fourth quarter of 2013.  It also would help millions of jobless workers and their families make ends meet.
Image 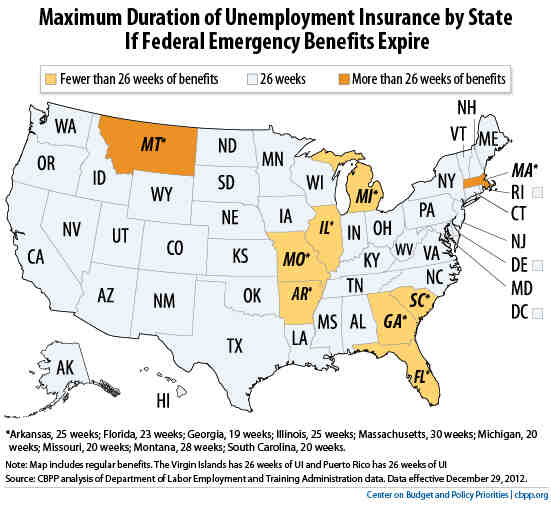 Moreover, because it’s a temporary program, EUC does not contribute to deficits over the longer term. The map shows what will happen if policymakers don’t renew EUC for another year.  Workers who lose their jobs in 2013 would receive only regular state unemployment insurance — a maximum of 26 weeks of benefits or less in nearly every state — in an economy where jobs remain hard to find.  The latest jobs report, for October, shows that 5 million jobless workers — 40.6 percent of the 12.3 million people who are unemployed — have been looking for work for 27 weeks or longer. In Part 2 of this post, I’ll show that it is unprecedented for policymakers to let emergency federal UI expire with unemployment as high as it is.