The number of weeks of federal unemployment insurance (UI) for eligible workers fell this week under legislation that President Obama and Congress enacted in February. Moreover, many workers could stop receiving benefits well before reaching the potential maximum because the temporary program providing those benefits, known as Emergency Unemployment Compensation (EUC), is scheduled to expire abruptly at the end of this year.  (As we explained last month, the permanent federal UI program — known as Extended Benefits [EB] — has already “triggered off” in all states because most states’ economies have stopped deteriorating, although unemployment rates remain high in many states.) The map below shows the maximum number of weeks of state and federal UI benefits now available.  The number of weeks of EUC shrank this week:
Image 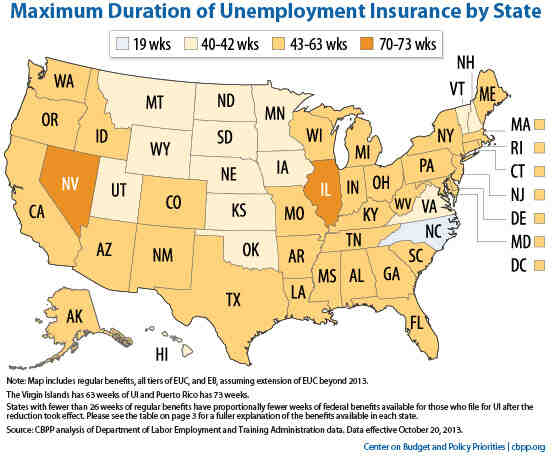 Temporary federal emergency UI programs like EUC are meant to expire once the labor market is strong enough that unemployed workers can find a job in a reasonable time.  Since policymakers first created an emergency federal UI program in 1958, they have never allowed one to end when unemployment topped 7.2 percent.  However, unemployment is expected to be around 8 percent at the end of this year, when EUC is slated to expire. Moreover, while EUC originally allowed people to complete whichever of the four benefit “tiers” they were in when the program expired, Congress’s latest extension calls for a “hard” cut-off that ends benefits immediately at the end of the year. Congress should avoid the cruel and unprecedented step of letting EUC expire abruptly at a time when unemployment will likely still be very high.
Related Posts:
Topics:
Economy
PreviousSchools Face Another Tough Budget Year
NextWhy Is Labor Force Participation Shrinking?
Stay up to date
Receive the latest news and reports from the Center