| By CBPP
Among the various tax and spending measures scheduled to expire in December, the payroll tax cut and emergency federal unemployment insurance are among the most cost-effective at boosting the economy without endangering efforts to control long-term deficits and debt. That’s why, given the state of the economy, we should extend both of them for another year, our new report explains. Here are some excerpts:

If the payroll tax cut ends abruptly as scheduled on December 31, the paychecks of the average working family will shrink by roughly $1,000 over the course of 2013, putting downward pressure on consumer spending when the economy remains vulnerable. Goldman Sachs estimates that this alone would slow next year’s economic growth rate by 0.6 percent. Slower growth, in turn, would put upward pressure on unemployment. For these reasons, Larry Summers, former director of the National Economic Council under President Obama, stated last week that “this is not the right moment to repeal the payroll tax cut.” 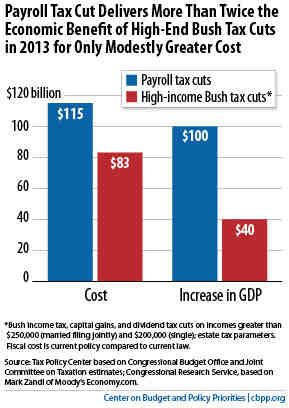 Emergency UI benefits, delivered through the Emergency Unemployment Compensation (EUC) program, have a particularly high “bang-for-the-buck.” Roughly 2 million people receive an average of $300 per week in EUC benefits; abruptly ending the program at the end of the year would take critical spending out of the economy. . . .

The payroll tax cut and emergency UI raise the incomes of those who are likely to spend most of it: working families and unemployed workers. Without these measures, spending would be lower and job creation would be weaker. . . .

As for the payroll tax cut, extending it in 2013 would cost $115 billion, and Zandi estimates this would boost the economy by $100 billion — which means the payroll tax cut’s economic bang-for-the-buck is nearly twice that of the upper-income tax cuts. . . .

These realities suggest a policy approach that would balance short- and long-term economic and fiscal factors. Allowing the high-end Bush tax cuts to expire would pose little near-term economic risk and be a good first step toward addressing long-term deficits, because extending those tax cuts would cost nearly $1 trillion over the next decade alone. Meanwhile, extending the payroll tax and emergency UI benefits for one more year would provide cost-effective support for the economic recovery but pose no long-term fiscal risk because both provisions would end, rather than becoming permanent parts of the fiscal landscape.