President Trump’s 2018 budget would cut public housing by $1.8 billion — or nearly 29 percent — compared to 2017, making it much harder for local housing agencies to maintain developments that provide badly needed affordable homes to low-income families struggling with rising rents. The cuts would expose some of the most vulnerable Americans to health and safety hazards and the risk of losing their homes, even as the budget proposes lavish tax cuts for the wealthiest households.

The great majority of public housing residents are elderly, people with disabilities, or working-poor families with children. Public housing units are located in every state (see here for the state-level cuts) and close to a quarter are in small towns or rural or exurban (i.e., beyond the suburbs but not rural) areas (see graph). 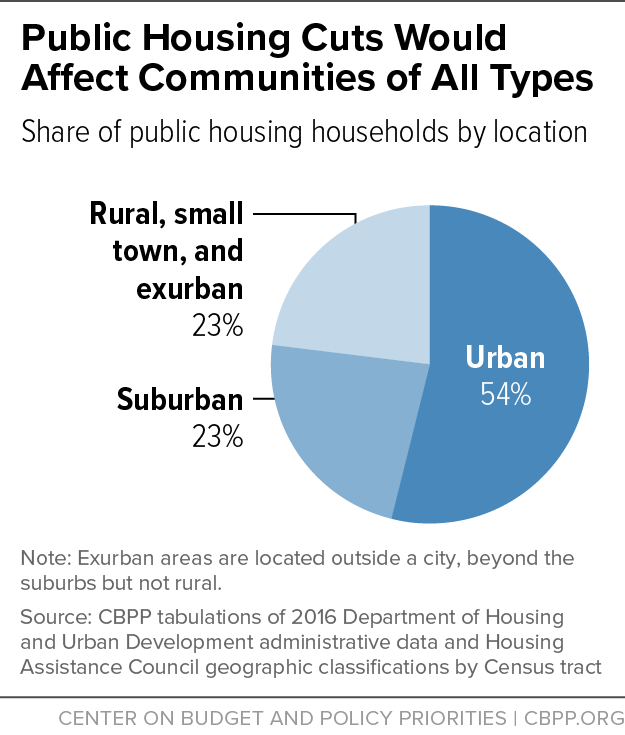 The budget would give local housing agencies just 81 percent of the subsidies they need to cover the gap between the cost of operating public housing and the rent that low-income families can afford, the Department of Housing and Urban Development (HUD) estimates — which would be the lowest share in at least three decades. Capital funding for major public housing renovations would fall to $628 million — about one-third of the lowest level ever. In addition, the budget eliminates the Choice Neighborhoods Initiative, which mainly funds the revitalization of distressed public housing developments and the surrounding neighborhoods.

The budget calls for more private investment to preserve public housing, but its proposed cuts would make that much harder. The budget would remove a cap on the number of public housing units in the Rental Assistance Demonstration (RAD), a promising initiative to leverage private financing for repair and renovation. But to repay private loans, RAD relies on long-term subsidies tied to the level of public housing funding at the time of the transaction. The proposed cuts would sharply reduce those subsidies and consequently limit the amount of private financing that could be raised.

The budget also seeks “reforms” that it suggests would help agencies cope with lower funding, but they’d do little to offset the cuts. The budget, for instance, would let housing agencies use operating and capital funds interchangeably, but that wouldn’t matter much since both would be cut severely. The budget would raise rents on some public housing residents with little or no income, which would generate only modest added revenue while leaving those families more destitute. And the budget would grant HUD sweeping authority to weaken oversight of local housing agencies, but that would do little to reduce operating costs that stem mainly from items like maintenance or utilities rather than unnecessary administrative requirements.

As result, local housing agencies would have to implement the cuts mainly in ways that harm vulnerable seniors and families:

Trump Budget Would Increase Homelessness and Hardship in Every State, End Federal Role in Community Development

May 23, 2017
PreviousTrump Budget Should Be Dead on Arrival — But May Not Be
NextTrump Budget Would Hurt Older Americans
Stay up to date
Receive the latest news and reports from the Center